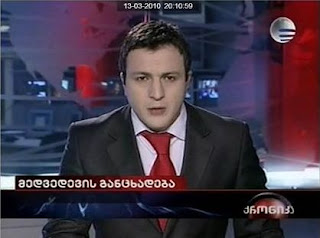 On March 13, 2010, the Georgian television channel Imedi TV aired a mock news broadcast pretending to report on a new Russian invasion of Georgia sometime this June. Although the bogus newscast was preceded by a disclaimer that it was fake, it nonetheless created a lifelike feeling among Georgians and made headlines in Georgian, Russian and Western media. A decision by producers not to make an announcement regarding the report’s phoniness in the form of running crawl gave the broadcast its “real time” sense.

Before presenting our own conclusions on the purpose of the mock TV broadcast, it is important to first look at the sequence of events of the staged invasion as it occurred in the TV producers’ own imaginations:

1. The elections are held (Georgia is indeed in the run-up to the local elections scheduled for May); the pro-Russian opposition loses and stages rallies to contend the election results.

2. A group believed by the opposition to represent the government, but seen by the authorities as Russian spies, opens fire on the demonstrators; several people are killed and many more wounded.

3. Outraged, the opposition appeals to the international community to intervene and help in getting rid of “Saakashvili’s tyranny”.

4. The leader of the Russian proxy regime in Tskhinvali (a.k.a South Ossetia) Eduard Kokoity is attacked in an ambush; the Kremlin claims it has evidence that Georgian security forces were implicated in the attack.

5. Pro-Russian Georgian oppositionists arrive in Tskhinvali and accuse President Saakashvili of being behind the terrorist attack.

6. Russia mobilizes its military forces in the occupied Georgian territories as well as the North Caucasus

7. In response, Georgia mobilizes its military in the proximity of Tskhinvali and later announces full mobilization to defend the capital, Tbilisi.

8. Georgia’s pro-Russian opposition announces the creation of the “people’s government” and calls the Saakashvili regime illegal and anti-constitutional.

9. The Russian president orders military intervention to help oust the “terrorist Saakashvili” and calls on Georgians to collaborate.

10. After the full-scale Russian invasion starts, heavy fighting is reported near Tbilisi, but “some Georgian army units defect to the enemy side.”

11. President Saakashvili is announced to have been attacked; he is either dead or severely wounded.

12. The role of the international community, in the bogus video producers’ scenario, is mostly that of a passive observer and is limited to occasional statements without any concrete action. President Obama’s critical reaction to the Russian invasion is the only exception.

The show was harshly criticized by Georgia’s pro-Russian opposition figures, opposition in general, and by the ruling party as well, but from very different perspectives. Nino Burjanadze, the former speaker of the Georgian parliament, who now leads the pro-Russian opposition in tandem with Zurab Noghaideli, Georgia’s former prime minister, was reported by Georgian media as saying, “The government’s treatment of its own people is outrageous.” Some oppositionists even demanded that Imedi TV be closed. In the meantime, the ruling party, United National Movement, requested “explanations” from the television channel. The leader of the parliamentary majority faction, Petre Tsiskarishvili, showed a particular dissatisfaction with the concluding episode, in which “several army units defected to the Russians.” The leader of the Georgian Church, Patriarch Ilia II, called the show “immoral” and “an affront on the Georgian nation and its army.” The Russian foreign ministry issued a special statement, condemning “the Imedi TV’s action as irresponsible first of all vis-à-vis the Georgian public” and accused it of “causing concrete damage to the security and stability in the region.” The Russian foreign ministry’s spokesman Andrei Nesterenko was quick to link President Saakashvili to the production of the program. John Bass, the U.S. ambassador to Georgia, expressed concern and warned that “these types of reports do not help Georgia’s security.”

Commenting on the fake newscast, President Saakashvili called it “unpleasant” but entirely “realistic.” He said: “It could have been done differently. Although the viewers had been warned that the show was fictitious, the appropriate notice must have been on display all the time.” On the other hand, he added, “the reportage was very close to the real state of affairs.”

High-ranking Moscow officials as well as Russia media outlets close to the Kremlin have long accused Georgia of rebuilding its military forces in order to take back by force the Russian-occupied Georgian provinces of Abkhazia and Tskhinvali. Some, as Russia’s deputy minister of internal affairs, have even alleged that Georgia is harboring terrorists and has plans to undermine security in the North Caucasus. Others, like Russia’s Foreign Minister Lavrov and Permanent Representative to NATO Dmitry Rogozin have several times expressed their dissatisfaction with deepening U.S.-Georgia partnership, claiming that it goes against Russia’s national interests.

Meanwhile, there is plenty of evidence that Moscow itself is strengthening its military and naval presence in the occupied territories, has enacted the law easing the use of force abroad, has been trying to delegitimize the Georgian government, and, at the same time, is forging ties with Georgian oppositionists in a obvious bid to establish a support base in Tbilisi.

Interestingly enough, one day before Imedi TV showed its fake report, the Russian Internet publication Segodnia.ru published an interview with the Russian military expert Zaur Alborov. In the interview, which was promptly reprinted by “official website” of the occupational regime in Tskhinvali, Osinform.ru, Alborov called for “a preventive [Russian] military operation to demilitarize Georgia by force.” The objectives of the operation, in his view, must be “arrest or liquidation of the leadership…of Georgia’s military and security forces…irreparable damage to the forces of the adversary…elimination or capture of the armament of Georgia’s armed forces and destruction of Georgia’s military infrastructure.” And this is just one characteristic example of belligerent views expressed by Russian experts and politicians.

Apparently, Imedi TV’s bogus newscast is based on the knowledge of all of this, reflecting the sentiments voiced in Russia. On the one hand, admittedly, the Georgian television’s show was awkwardly presented and the sequence in the scenario it subscribed to could just be a vague imagination. On the other hand though, there was a real Russian invasion two years ago and given its failure to produce regime change in Georgia and thwart the country’s pro-Western orientation, any new invasion to “finish the job” is highly probable if permissible international and domestic conditions are created by Moscow. The bogus newscast could also be seen as a warning by the TV channel whose producers might have some additional and highly confidential knowledge with which ordinary citizens of Georgia are not familiar.

Back
Is the Uzbekistan-Kyrgyzstan standoff th..Next
Will Georgia Recognize the Circassian Ge..

The Jamestown Foundation is pleased to host a forthcoming webinar... END_OF_DOCUMENT_TOKEN_TO_BE_REPLACED

Jamestown Foundation Analyst Kseniya Kirillova offered her expert analysis on Putin’s “partial mobilization” announcement to G-Zero. “The Kremlin calls it ‘partial’ so as not to... END_OF_DOCUMENT_TOKEN_TO_BE_REPLACED

The January 2020 issue features a brief on Salah Gosh, the former National Intelligence and Security Service director of Sudan who recently led a mutiny against the new government in Khartoum; a look at Abdullahi Banati, the al-Shabaab member terrorizing Kenyan security forces on the Somali border; an examination of... END_OF_DOCUMENT_TOKEN_TO_BE_REPLACED