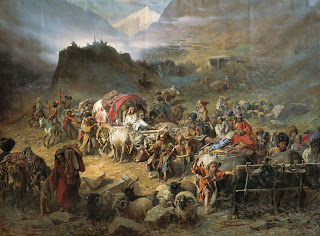 On March 20-21, the Georgian capital of Tbilisi hosted the conference: Hidden Nations, Enduring Crimes: The Circassians and the Peoples of the North Caucasus Between Past and Future. Organized by the Jamestown Foundation and Ilia State University’s International School for Caucasus Studies, the two-day event brought together representatives of Circassian communities, as well as think-tanks, policy and research institutions and academia working on Caucasus-related issues. Several members of Georgian Parliament also attended the conference whose culminating part was the signing of an appeal by the Circassian participants to Georgian Parliament to recognize the massacres and deportations of Circassians orchestrated by Tsarist Russia in the North Caucasus as genocide.

No doubt, if Georgia agrees to recognize the mass killings of Circassians as genocide, it will infuriate Russia and risk further worsening the already-strained Russo-Georgian relations. But could the recognition benefit Tbilisi in some other ways which could outweigh the Russian ire?

The recognition issue has quite a history of its own. Former Russian President Boris Yeltsin’s 1994 statement acknowledged that “resistance to the tsarist forces [in the 19th century] was legitimate,” but he did not recognize “the guilt of the tsarist government for the genocide.” A few years later, the leaders of Kabardino-Balkaria and Adygea sent appeals to the Duma “to reconsider the situation and to issue the needed apology.” In October 2006, the Circassian public organizations of Russia, Turkey, Israel, Jordan and several other countries where ethnic Circassians live in large numbers sent the president of the European Parliament a letter with a request to recognize the genocide against the Circassian people. There has been no action taken so far.

It appears the issue is now closely linked to the upcoming Sochi Winter Olympic Games, which are opposed by many Circassians on the grounds that the city of Sochi and large swaths of land in the northwestern Caucasus are their ancestral habitat saturated with Circassian blood. Their protests have taken different forms; from appeals to governments and international human rights and environmental organizations to organizing public awareness campaigns in printed media and on the Internet. Some enthusiasts have launched the website No Sochi 2014 with a countdown to the 150-year anniversary of the Circassian genocide in 2014 – a time when the Sochi Olympics are scheduled to take place.

Hundreds of thousands of Circassians and other ethnicities were killed and many more were deported to the Ottoman Empire by Tsarist Russia when the latter expanded to the Caucasus from the late 18th century to 1860s. Georgian writer of the 19th century Alexander Kazbegi has dedicated some of his novels to the Circassian tragedy.

Among those affected by Russia’s expansionist policies were Muslim Abkhaz as well. Living along Georgia’s Black Sea coast in the south Caucasus, Abkhaz, related to the Circassians by language but historically and culturally closely linked to Georgians living on the same land, had been Islamized after the Ottomans conquered western Georgia in the 16th century. Many Abkhaz deported from Abkhazia to the Ottoman Empire found shelter in Ajara, another Georgian province where a mainly Muslim Georgian population lived by then.

Since the Russian invasion in August 2008 and the subsequent occupation of the Georgian regions of Abkhazia and Tskhinvali, Tbilisi has intensified its efforts to engage with the North Caucasus more productively. A parliamentary inter-faction contact group has been created in addition to the establishment of Georgian Public Broadcaster’s (GPB) First Caucasus TV channel to reach out to the audiences in the North Caucasus and elsewhere in the former Soviet space. Georgian Parliament has already appealed to “the republics and peoples in the North Caucasus” to underline the importance of “cordial relations” between “Georgia and its Caucasian brothers.” Although the First Caucasus has been taken off the French Satellite Eutelsat, allegedly under Russian pressure, GPB hopes it will be able to shortly return its Russian-language channel to the satellite in one way or another. Russian dissidents and human rights activists have been visiting Tbilisi more often than ever before, which apparently has a North Caucasus linkage given their role in exposing flagrant violations of human rights there.

A possible recognition of the Circassian genocide might be logically put in the aforementioned Georgian activities, which could strengthen the image of Georgia as a defender of “the Caucasus cause” in the eyes of not only Circassians but other ethnic minorities in the North Caucasus too. But if Georgia wants to achieve more than a PR success, it might be prudent to consider other additional measures as well: Georgia should act in concert with other nations, most importantly those where Circassian diasporas reside; mass deportations of Chechens and Ingush as well as other ethnicities by Soviet dictator Stalin in the 1940s and ethnic cleansings of Georgians from Abkazia and Tskhinvali must be closely linked to the Tsarist atrocities in the 19th century since they constitute virtually the same imperialist policy; and lastly, the scheduled Sochi Olympics must be closely tied to the Circassian and environmental issues as well as to the illegal Russian occupation of Georgian lands.

Back
A New Russian Invasion of Georgia: Is It..Next
Yes They Did

The Jamestown Foundation is pleased to host the webinar, “The... END_OF_DOCUMENT_TOKEN_TO_BE_REPLACED