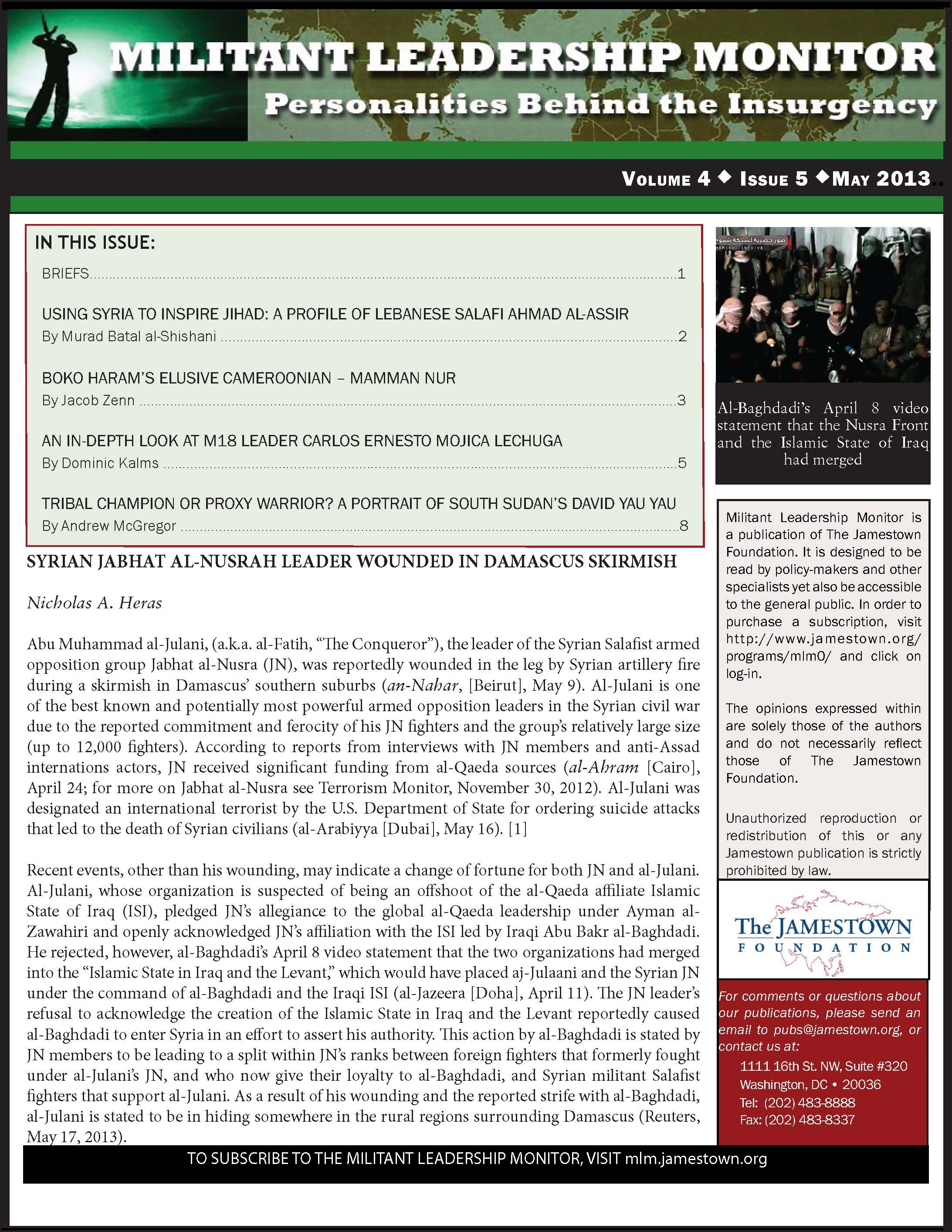 In this month’s issue of Militant Leadership Monitor, Jamestown analysts have written about militant and criminal underworld figures across the globe. In light of the rising tension between Lebanese Sunnis and Shiites that is being expressed in Syria, Murad Batal al-Shishani drew up a portrait of Lebanese Salafi Ahmad al-Assir who is using the crisis in Syria to inspire jihad. Jacob Zenn provided a sketch of Boko Haram mastermind Mamman Nur, who may have returned to Cameroon in 2012. Dominic Kalms wrote an in-depth look at El Salvador’s M18 leader Carlos Ernesto Mojica Lechuga. Andrew McGregor provided the first part of a two-part profile of South Sudan’s insurgency leader David Yau Yau.

In this “Special Report on The Syrian Uprising: A Focus on Parties and Leadership” we examine the roles of key religious, military, and political actors in the Syrian uprising. This 2012 Quarterly Special Report features five brand-new articles commissioned by The Jamestown Foundation and one highly... MORE
$20.00 Select options
The August Issue of Militant Leadership Monitor is a special issue. The report begins with two briefs by Nicholas A. Heras on Bin Laden aide Ramzi Mahmud al-Muwafi and Syrian YPG Commander Sipan Hemo, respectively. The following two profiles come from Eurasia Daily Monitor regular... MORE
$20.00 – $25.00 Select options
In this Special Report on the Libya Elections we examine the entrance of militant leaders into the political scene as the country recovers from several decades of Gaddafi's rule. This 2012 Quarterly Special Report features five articles and a timeline commissioned by The Jamestown Foundation.... MORE
$20.00 – $25.00 Select options
In this Quarterly Special Report (QSR) on the conflict in South Sudan, we focus on the civil wars, border disputes and rivalries between ethnic groups that have resulted in over half a century of violence in the country. The QSR begins with an overview by... MORE
$20.00 – $25.00 Select options