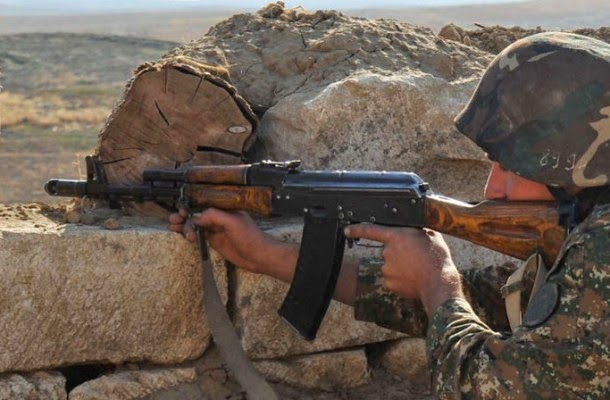 By Leyla Aslanova
As Azerbaijan begins its fourth Individual Partnership Action Plan (IPAP) cycle with the North Atlantic Treaty Organization (NATO), tensions are on the rise with its neighbor Armenia over the breakaway Azerbaijani region of Karabakh, occupied by Armenian forces. The latest serious armed confrontations began on July 30, 2014 (see EDM, August 7)—the most serious violence since the ceasefire agreement was reached in May 1994. The increase in violent clashes could spark a new wide-scale conflict in the region. But it also suggests that Russia may be intentionally inciting provocations by ordering Armenia to make trouble in Karabakh to help further President Vladimir Putin’s regional ambitions.
Beginning in June 2014, Russian media, led by Moskovskiy Komsomolets, intentionally disseminated information about Armenia’s possible plans to launch a war against Azerbaijan and attack Nakhchivan (Moskovskiy Komsomolets, June 11). While this story did not receive much attention at the time, Russia’s annexation of Crimea and ongoing involvement in the separatist fighting in eastern Ukraine brought renewed concern, highlighting the dangers inherent in the Karabakh conflict. Prominent experts have since written on the importance of finding a resolution to the Karabakh conflict and have specifically pointed to the similarities between the occupations of both Crimea and Karabakh (see, for example, Thomas de Waal, “Nagorno-Karabakh: Crimea’s doppelganger,” Open Democracy, July 13). It is becoming ever more apparent that Moscow is pushing Yerevan to reignite the Karabakh conflict as a means to contain Baku’s cautious approach of the West and to block the Euro-Atlantic community’s attempts to boost their influence in the South Caucasus—which Russia considers to be within its sphere of influence.
In May 2014, United States Senator Bob Corker (R­-TN) proposed the “Russian Aggression Prevention Act of 2014,” which not only includes stricter sanctions against Russia but also offers major non-NATO ally status for Ukraine, Georgia, and Moldova. Furthermore, the bill increases armed forces cooperation between the US and Georgia, Ukraine, Moldova and Azerbaijan (see EDM, August 4). Notably, however, the proposed legislation’s named partnerships exclude Armenia, most likely due to Yerevan’s recent policy reorientation completely away from Europe. Firstly, Armenia is Russia’s long term ally and is committed to its military alliance with Moscow; in particular, Armenia hosts a Russian base with 4,000 soldiers (see EDM, September 11, 2013). Secondly, on March 27, Armenia was among 11 countries that voted against the United Nations General Assembly resolution that declared the Crimean referendum invalid (UN, March 27)
Azerbaijan, on the other hand, has developed closer relations with NATO over the years as a part of the Individual Partnership Action Plan process. The country’s third IPAP cycle is currently being assessed, and the two sides are finalizing the draft of Azerbaijan’s fourth IPAP cycle for the period of 2014–2015 (trend.az, August 5). During the conference “NATO Wales Summit: Forecasts and Perspectives,” held in Baku on August 5, the British ambassador to Azerbaijan, Irfan Siddiq, raised specific areas of cooperation between the North Atlantic Alliance and Azerbaijan that need to be emphasized in the new IPAP. These included the development of a dynamic action plan for preparedness and response to new types of threats as well as increasing the defense capability of NATO member countries and the Alliance’s readiness to respond to existing threats (1news.az, August 5).
On August 7–8, Azerbaijani Deputy Foreign Minister Araz Azimov held meetings at NATO Headquarters in Brussels concerning the negotiations over the new IPAP document (trend.az, August 5). With the renewed fourth IPAP cycle, NATO is more likely to try to boost its cooperation with Azerbaijan in the Caspian Sea. And NATO’s upcoming Wales summit in September 2014 also suggests prospects for increased cooperation to ensure security and stability in the Black Sea and the Caspian Sea regions. Moscow is likely to vehemently oppose any NATO presence in the Caspian, as Russia already pressed the other Caspian littoral states—Azerbaijan, Kazakhstan, Turkmenistan and Iran—not to allow any outside military forces to enter their shared body of water (see EDM, May 5). Nevertheless, in his speech during the August 5 Baku conference on the NATO Wales summit, Romanian ambassador to Azerbaijan Daniel Cristian stressed that European Union countries are ready to support the expansion of relations between Azerbaijan and the Euro-Atlantic institutions (Yap.org.az, August 5).

As such initiatives by the North Atlantic Alliance toward Baku grow in frequency, the unintended consequences will be the increase in provocations by Yerevan along the Azerbaijani-Armenian border. Therefore, the renewed skirmishes over Karabakh serve as yet another reason for international powers and institutions to act and to reject Russia’s imperialistic ambitions in the region, which stand in the way of peacebuilding and the establishment of security across the South Caucasus.

Back
Karabakh Fighting Intensifies Lezgin Sep..Next
No Crimea or Novorossiya Likely In Kazak..

The Jamestown Foundation is proud to present a virtual event to... END_OF_DOCUMENT_TOKEN_TO_BE_REPLACED

There is an outpouring of reporting on Russian activities in Syria, and to a lesser degree other countries in the Middle East and North Africa. But until now, there has been no single effort to analyze the totality of Russian objectives there as well as its instruments of power,... END_OF_DOCUMENT_TOKEN_TO_BE_REPLACED