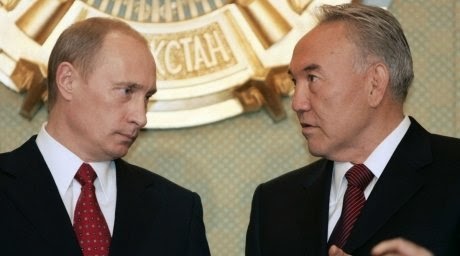 By Paul Goble
More ethnic Russians have fled Kazakhstan to go to the Russian Federation than their counterparts in any other former Soviet republic, and many still there are unhappy with Astana’s language policies. And yet, the ethnic Russians in Kazakhstan today—who number 3.6 million and form a fifth of the population, now down from a majority only a generation ago—have little interest in backing the equivalent of a Crimea or Novorossiya separatist project in their country.
Such enterprises certainly do not require majorities to succeed. However, in Ukraine they have worked best where local ethnic Russians backed the inclusion of their home territories into the Russian Federation (such as in Crimea) and at least required some organized popular discontent along ethnic lines (as in “Novorossiya”). Consequently, both Russian and Kazakhstani observers say, there is little chance that Moscow will make a move in that direction inside the largest Central Asian republic. And this is despite the recent suggestions by extreme Russian nationalist politician Vladimir Zhirinovsky that Moscow will turn its attention to Kazakhstan after it subdues Ukraine and notwithstanding recent Russian military maneuvers along the Kazakhstani border (fergananews.com, August 22).
According to experts, there are three reasons for this: First, there is little ethnic tension in Kazakhstan because the ethnic Russians and ethnic Kazakhs occupy different socio-economic niches and do not compete as they do in Ukraine. Overwhelmingly, those ethnic Russians who left earlier did so because of the economy rather than because of ethnic hostility. Second, a failed attempt in the late 1990s by some Russians to secede and either form a separate state or join the Russian Federation was thoroughly crushed by the Kazakhstani authorities, and its leaders were fully discredited. Hence, there is almost no interest in the idea now. And third, most ethnic Russians remaining in Kazakhstan are focused on their personal lives rather than on political projects. There are few of the latter, and they involve only a minute portion of the population. Indeed, in the words of one close observer of this scene, “despite all the moral and other discomfort” some of them feel about the current situation, “the majority of the Russian community retains its loyalty to the Kazakhstani state” (fergananews.com, August 22; see EDM, August 13)
Nonetheless, Russia’s moves in Ukraine and the appearance of supporters of imperial projects in the upper echelons of the government in Moscow has prompted Kazakhstan’s government to re-evaluate the situation. Its leadership has concluded, Fergana.ru says, that “separatist attitudes, if they exist in the northeastern districts [of Kazakhstan], this is exclusively at the level of conversations and has never acquired any even semi-official forms.” Moreover, the experts say, most ethnic Russians in Kazakhstan believe that the introduction of Russian forces into Kazakhstan would harm them more than the Kazakhs.

But at least some involved in this review say Kazakhstan’s very success in economic development means that Moscow will continue to try to promote instability there even if the prospects for success are not great. That is because, in the words of one of the participants, while successful countries are pleased by the success of others, those which are falling behind are typically angry. Right now, across a wide range of socio-economic criteria, Kazakhstan is more successful than the Russian Federation, and that may make it a target for Moscow, even if the local Russians do not want to be involved.

Back
Azerbaijan Strengthens Its Cooperation W..Next
Putin’s Journey Along the Sino-Russian..

The Jamestown Foundation is pleased to host the webinar, “The... END_OF_DOCUMENT_TOKEN_TO_BE_REPLACED