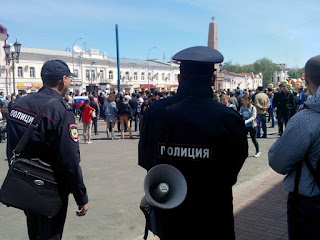 By Paul Goble
On May 30, a group of Buryats went out into the streets on the 92ndanniversary of the formation of the Buryat-Mongol Autonomous Republic, and demanded that the republic’s head be replaced and that both the republic government and Moscow focus on preventing the total collapse of Buryatia’s economy. The militia intervened and attempted to arrest several participants and take down their signs. Instead of being intimidated, other participants intervened, fought with the police, and forced the authorities to release those they had detained. The demonstrators were then able to put their banners up in the republic’s capital.
Moreover, the organizers of this demonstration have now scheduled two more, for June 7 and June 14. They have expanded their demands to include expanded ties with, and possible reunification of, the two Buryat autonomies in the Russian Federation that Vladimir Putin amalgamated with larger and predominantly Russian regions in 2005 and 2007, as well as greater control over the republic’s natural wealth. Because official actions have failed to intimidate the opposition, one of its members told the media that “Buryatia has already entered a revolutionary situation” (Asia Russia Daily, May 30).
Buryatia, a republic in the Trans-Baikal with a population of approximately one million, seldom gets much attention from Moscow or the outside world. On the one hand, ethnic Russians outnumber the titular Buddhist nationality more than two to one, giving Moscow the kind of leverage over the republic’s affairs that it lacks in some other non-Russian republics. And on the other, Buryatia is seven time zones away from Moscow, a distance that means few Western journalists or diplomats ever visit and thus few Buryats can count on the kind of support that regular attention from such groups provides.
Indeed, it has garnered attention from the outside world only twice in the last decade, when Putin successfully annexed to Russian regions the two other Buryat “matryoshka” autonomies (that is, federal subjects entirely surrounded by another federal subject) a decade ago. Those annexations have not gone well: the standard of living and degree of local control have both declined precipitously despite Moscow’s promises. And that is likely one of the reasons that an opposition movement has emerged in that Transbaikal region.
But Buryatia is likely to attract more attention in the future. First, the Buryats have expanded their ties with Mongolia, something Ulaanbaatar has been active in encouraging, and thus they have a foreign partner, albeit a somewhat obscure one. Second, the economy in Buryatia is in such obvious decline that many Buryats are fearful not just of what will happen to their children and grandchildren but of what will happen to them. They are especially angry because Moscow is expropriating much of the wealth generated by the republic’s rich natural resources (Asia Russia Daily, May 31). And third, many Buryats are upset by Moscow’s increasingly Russian nationalist line and its imposition of a Russian language–first policy in schools even in non-Russian areas.

It may be overstating the case to say, as some Buryats have, that their republic is now in “a revolutionary situation.” But it is not too much to say that the potential for that is now greater there than in any non-Russian republic outside of the North Caucasus. Given that Moscow cannot afford to lose control of a territory that sits astride the Trans-Siberian rail line, the danger Buryatia presents is far greater than anyone expected only a few months ago.

Back
Sargsyan’s Visit to the US Opens New S..Next
Moscow Faces Uprisings in Its Penal Syst..

The Jamestown Foundation is proud to present a virtual event to... END_OF_DOCUMENT_TOKEN_TO_BE_REPLACED

The October 2014 issue of Militant Leadership Monitor begins with two briefs on Syrian fighters by Nicholas Heras. Abu Issa is the leader of FSA affiliate Liwa Thuwar al-Raqqa and has worked to coordinate operations with the Syrian Kurds as they fight against the Islamic State organization at Kobane.... END_OF_DOCUMENT_TOKEN_TO_BE_REPLACED