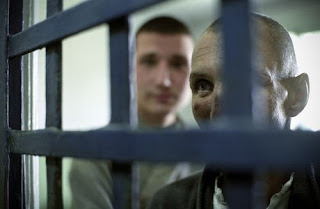 By Paul Goble
It is one of the paradoxes of authoritarian regimes that they face revolts among their prison population far more often than democratic systems.  On the one hand, that seems odd given that authoritarian regimes are far more willing to employ violence to suppress any actions by the members of their societies with the fewest rights. But on the other, it is entirely explicable because such regimes incarcerate many people who would not be put behind bars anywhere else; and some of them, like Sochi ecologist Yevgeny Vitishko, are more than willing to speak out on behalf of the prisoners and even organize protests.
In any case, at a time when the Kremlin has successfully suppressed almost all mass protests in the nominally “free” Russian population, it now faces a wave of violent uprisings among its explicitly “unfree” one. According to one count, there were six such prisoner “bunts” (revolts) during May alone, and that almost certainly understates the problem because many of these actions are never reported. Indeed, the amount of violence inside prison walls is now sufficiently large that some human rights activists fear it will provoke the penal authorities to impose an even harsher order on their inmates. Such actions, however, may prove counter-productive—like throwing water on a grease fire—and call into question official control of at least some of Russia’s prisons and penal colonies.
Both the need to restore order and the dangers of making the situation worse inform a current debate in and around the Duma about government-proposed legislation that would allow jailors to apply greater force against the jailed, something opponents are calling “the law of the sadists,” according to Margarita Alekhina of Novyye Izvestiya (Newizv.ru, June 4). But even as lawmakers and rights activists debate the matter, the jailors are taking action.  According to one report from a camp in Chelyabinsk, prison officials have removed the fire escapes from the prison barracks. This action prevents prisoners from going to the roof—the first thing they do during a revolt. But it also means that in the event of a fire, dozens or even hundreds of inmates could die—something that would trigger sympathetic revolts in other prisons and organized protests among human rights activists. Among those who have promised to lead such protests is Lyudmila Alekseyeva, the head of the Moscow Helsinki Group.

In her survey of the situation, Alekhina points to a truly frightening aspect of what is going on. It appears that in many cases, Russian jailors are now trying to provoke uprisings in order to gain support for “the law of the sadists” by suggesting that without additional powers, they will not be able to control the situation.  That high-risk tactic suggests just how dangerous the situation is and should lead everyone to recall what happened in 1953–54: With the death of Soviet dictator Joseph Stalin, many prisoners in the GULAG prison camp system revolted. Fears of these prisoner uprisings spread through the Soviet leadership, and it became one of the prime causes for “the thaw” and anti-Stalin campaign that consequently took place under Nikita Khrushchev. The implications for Russia’s modern-day government are thus dangerous, indeed.

Back
‘Buryatia Has Already Entered a Revolu..Next
Alleged IS Recruiter Arrested in Georgia..

On August 4, the Jamestown Foundation held a webinar  on... END_OF_DOCUMENT_TOKEN_TO_BE_REPLACED

On September 11, Jamestown Foundation Senior Fellow Janusz Bugajski was interviewed by the Polish Naval War Academy regarding his book, Failed State: A Guide to Russia’s... END_OF_DOCUMENT_TOKEN_TO_BE_REPLACED

Unmasking Terror Volume IV: A Global Review of Terrorist Activities brings together over 50 experts on terrorism. Edited by Andrew McGregor, Unmasking Terror Volume IV continues the work of previous volumes by providing an unparalleled collection of indigenous terrorism analyses to the media, intelligence, and academic communities. Like its previous volumes,... END_OF_DOCUMENT_TOKEN_TO_BE_REPLACED