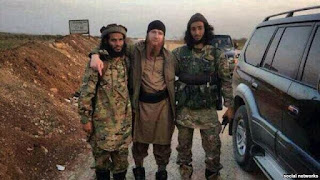 By George Tsereteli
On June 14, the counter-terrorism unit of the Georgian Ministry of Internal Affairs conducted special operations in the Pankisi Gorge, leading to the arrest of Aiuf Borchashvili as well as several other men. According to investigators, Borchashvili, a resident and imam of the village of Jokolo, is a representative of the Islamic State (IS) in Georgia and had been recruiting local youths to join the group’s fight in Syria and Iraq (Police.ge, June 15). Simultaneously, three individuals ages 18, 21 and 23 were arrested in Tbilisi, two of whom were detained at Tbilisi International Airport, allegedly en route to Turkey to join IS troops, on a trip that was organized by Borchashvili.  The latter is further implicated in using religious literature and social media to recruit two young males from Pankisi in early April and arranging for their trips to join IS in Syria (Police.ge, June 15).
While Borchashvili and the three young men arrested in Tbilisi remain in custody and have been ordered  to pretrial detention, the other men who were detained during the operation in Pankisi have since been released: among them, the alleged cousin of one of Islamic State’s top commanders Tarkhan Batirashvili, better known as Umar al-Shishani (EurasiaNet, June 16; Civil Georgia, June 18).  As for Borchashvili, he has been formally charged with being involved with recruitment for a terrorist organization as well as with joining a terrorist organization of a foreign country or providing support to it in terrorist activities. His defense lawyer has stated that the “allegations are absolutely groundless” (Civil Georgia, June 15, 18).
The Islamic State’s influence in the North Caucasus has undeniably risen in the region over the past several months, and more and more individuals from southwestern Russia have either succeeded, or at least attempted, to join the ranks of the organization. These individuals range from preachers, to those who feel persecuted, to those desperate to ally themselves with the popular militant Salafist group (see EDM, May 28; EDM, June 4; EDM, June 5).  It is therefore neither surprising that counter-terrorism operations have greatly increased across the North Caucasus, nor that there are over 300 people working to fight against IS recruiters in Moscow alone (see EDM, June 12).  According to the State Department’s recently released “Country Reports on Terrorism 2014,” because of Georgia’s geographical location, “violent Islamist extremists continue[d] to transit through the country between the Russian Federation’s North Caucasus and Syria and Iraq.” Further, due to Tbilisi’s lack of control over the Russian-occupied territories of South Ossetia and Abkhazia as well as a tense relationship with Moscow, Georgia has only a limited capacity to secure its northern border (State.gov, June).

The events of the last few days have amplified the increasing presence and influence of the Islamic State not only in the North Caucasus but also within the borders of Georgia.  According to varying and sometimes contradictory estimates, anywhere between 50 and 100 Georgian nationals from the Muslim-majority regions of the Pankisi Gorge and Adjara have been fighting in Syria and Iraq for either IS or al-Qaeda (State.gov, June). An incident in early April allegedly involving Borchashvili caused outrage in Pankisi, as one of the recruits was an underage 16 year old boy. Residents subsequently began voicing concerns about the local presence of a group whose members were actively recruiting Pankisi’s youth to join militants fighting abroad, and that the government had not effectively put in place any counter-measures (RFE/RL, April 21). Although details regarding the exact activities of Borchashvili and his collaborators are as of yet unknown, if the allegations prove to be true, the June 14 special operations will have been a major step forward for the Ministry of Internal Affairs. Regardless, it has become abundantly clear that Georgia has no choice but to ramp up its counter-terrorism efforts and to do all it can to prevent the recruitment of young individuals by IS from within its borders.

Back
Moscow Faces Uprisings in Its Penal Syst..Next
ECHR Rules on Claims by Armenian and Aze..

The Jamestown Foundation is proud to present a virtual event to... END_OF_DOCUMENT_TOKEN_TO_BE_REPLACED