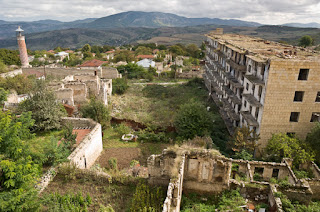 By Erik Davtyan
On June 16, the European Court of Human Rights (ECHR) adopted two resolutions based on a pair of claims that were separately put forward by Azerbaijani and Armenian refugees. The claim against Armenia was raised by Elkhan Chiragov and five other Azerbaijani Kurds, who lived in the former district of Lachin in the Azerbaijani Soviet Socialist Republic. According to the applicants, “on 17 May 1992 they were forced to flee from the district to Baku. They have since been unable to return to their homes and properties because of Armenian occupation” (Case of Chiragov and others v. Armenia, June 16, 2015). Analyzing the material and facts related to the case, the ECHR decided that “from the early days of the Nagorno-Karabakh conflict, Armenia has had a significant and decisive influence over the ‘NKR’ [the unrecognized Nagorno-Karabakh Republic], that the two entities are highly integrated in virtually all important matters and that this situation persists to this day.” The Court concluded that taking into account the military, political, financial and other support, “Armenia exercises effective control over Nagorno-Karabakh and the surrounding territories, including the district of Lachin.”
Simultaneously, a similar claim was raised by Minas Sargsyan, an Armenian national, on August 11, 2006 (Case of Sargsyan v. Azerbaijan, June 16, 2015). According to the applicant, “the denial of his right to return to the village of Gulistan and to have access to his property there or to be compensated for its loss and the denial of access to his home and to the graves of his relatives in Gulistan amounted to continuing violations of Article 1 of Protocol No. 1 and of Article 8 of the [European] Convention [on Human Rights].” Moreover, Sargsyan mentioned that Articles 13 and 14 were also violated by the Azerbaijani Republic. The European Court satisfied the main claims and recognized that Azerbaijan has violated the 1st (property protection), 8th (right of respect for private and family life) and 13th (right for compensation) articles of the 1950 Convention (Armenpress.am, June 17).
Generally, the issue of refugees and internally displaced persons plays an important role in the Karabakh peace process. According to the United Nations High Commissioner for Refugees (UNHCR), the war between Armenia and Azerbaijan resulted in 400,000 ethnic-Armenian refugees from Azerbaijan (Unhcr.org, 2008). As to Azerbaijani refugees and internally displaced persons (IDP), the UNHCR counts nearly 600,000 (Unhcr.org, 2009). In other words, the total number of refugees and IDPs reaches around one million. Therefore, this issue is of great importance both for Armenia and Azerbaijan.

In fact, from a legal perspective, the ECHR’s recent decisions are important for the peace process, especially in the context of legal qualifications. The case of “Sargsyan v. Azerbaijan” may serve as a successful precedent for Armenian refugees and IDPs to demand compensation from Baku in the same way. As to the case of “Chiragov and others v. Armenia,” it contained more positive clauses for Azerbaijan. Though the Court stated that Armenia implements effective control over Karabakh, it also ruled that Armenia is responsible for the occupation of the aforesaid territories, which was highly welcomed in Baku. According to the official statement of the Ministry of Foreign Affairs of Azerbaijan, “the ECHR decision has put an end to Armenia’s denial of its own responsibility for illegal occupation and military presence on the territories of Azerbaijan” (Regnum.ru, June 21). Currently, Armenian and Azerbaijani authorities interact mainly under the auspices of the Organization for Security and Cooperation in Europe’s (OSCE) Minsk Group Co-Chairmanship. But these kinds of legal rulings may contribute to the clarification and complete or partial solution of key components of the Karabakh conflict.

The Jamestown Foundation is pleased to host a forthcoming webinar... END_OF_DOCUMENT_TOKEN_TO_BE_REPLACED

Jamestown Foundation Analyst Kseniya Kirillova offered her expert analysis on Putin’s “partial mobilization” announcement to G-Zero. “The Kremlin calls it ‘partial’ so as not to... END_OF_DOCUMENT_TOKEN_TO_BE_REPLACED

China in Africa examines the complexity of China’s engagement with the African continent. The book covers critical issues such as Chinese soft and hard power, energy and arms relations, and China’s bilateral relations with African countries. Ultimately, this volume serves to assist in improving policymakers’ understanding of China’s growing footprint... END_OF_DOCUMENT_TOKEN_TO_BE_REPLACED