By Janusz Bugajski and Margarita Assenova

On Tuesday, September 6, 2016, The Jamestown Foundation hosted the official launch of its latest book, Eurasian Disunion, written by Janusz Bugajski (a Senior Fellow at the Center for European Policy Analysis, CEPA) and Margarita Assenova (Director of Programs for the Balkans, Caucasus & Central Asia at The Jamestown Foundation). The event featured presentations by both authors as well as additional remarks from Jamestown’s Distinguished Senior Fellow S. Enders Wimbush. Bugajski began the discussion with a broad overview of Russian objectives and motivations in its neighborhood. As he noted, Russia’s public paranoia is rooted in fears of Ukraine’s success at transforming into a Western, democratic, European state, which could serve as an example to emulate by other post-Soviet states and even some Russian internal regions. Bugajski also argued that Russian actions are specifically designed to divide and weaken the West. As such, Moscow’s disinformation and propaganda campaigns routinely accuse Western society of degeneracy, hostility toward religious or conservative values, and an inability to deal with migration or to control Muslim extremism. Assenova’s following remarks explored in more detail Moscow’s various strategies in the five regions that border Russia—the Baltic and Nordic, Central Eastern Europe, Southeastern Europe, the South Caucasus, and Central Asia. As she noted, Russia’s strategy is well thought out and its tools are employed selectively depending on the target country or region. The varying sizes of Russian minorities across Russia’s “near abroad” also affect the relative vulnerabilities of the countries across the five flanks. Assenova pointed out that particularly since the invasion of Ukraine, none of the post-Soviet countries trust Russian intentions as much as they used to, which is why the Moscow-backed Eurasian Economic Union project is highly unlikely to succeed. And as Russia’s economy continues to slip, China will advance economically in all these regions.

The final remarks were delivered by S. Enders Wimbush. He began by noting that while historically Russia’s flanks were locked in a direct center-periphery relationship, today these flanks are increasingly forming their own “centers” with their own distinct foreign policies—for example, Kazakhstan, Georgia and Central Eastern Europe—and these flanks more and more have their own flanks. Furthermore, unlike under the Russian/Soviet Empire, these flank regions are now increasingly interacting with one another in various ways, including in the spheres of politics, economics and security. As such, these developing dynamics are progressively more complex, and the United States currently lacks the institutional capacity to understand them with any confidence. At the same time, Wimbush argued, Russia is in a state of unstoppable decline, and it has been acting increasingly aggressively outside its own borders—in Ukraine and Syria, most recently—precisely as it has been growing weaker, not stronger. Thus, we should expect more such behavior from Moscow in the months and years ahead. He warned that the most dangerous response to this situation would be to give in to mirror imaging and expect Russia to behave the same way the United States would to a particular regional or global issue. Rather, Wimbush suggested that the West should fully embrace a flank containment strategy, whereby these regions are actively strengthened by the West. And in this strategy, countries like Georgia and Ukraine will, by necessity, become part of a hard European outer shell to contain a collapsing but increasingly aggressive Russia.

Margarita Assenova is Director of Programs for the Balkans, the Caucasus and Central Asia at the Jamestown Foundation. She is a regular contributor to the Jamestown publication Eurasia Daily Monitor on political developments and energy security in the Balkans and Central Asia. Assenova is a recipient of the John Knight Professional Journalism Fellowship at Stanford University for her reporting on nationalism in the Balkans. Her articles have appeared in US and European newspapers, magazines, and online publications, including RFE/RL Newsline and Balkan Report, The Washington Times, The World and I, Transitions Online, Balkan Times, Capital Weekly and Reason Magazine (Bulgaria), Internationale Polititik (Germany), World Finance Review Magazine (UK), and Future Prospects (UAE). She authored book chapters and journal articles on security, energy, and democracy published by CSIS Press, Brassey’s, Freedom House, Bertelsmann Foundation Publishers, the University of New Haven and the Jamestown Foundation. She is the co-editor of Azerbaijan and the New Energy Geopolitics of Southeastern Europe, published by the Jamestown Foundation in June 2015.

Janusz Bugajski is a Senior Fellow at the Center for European Policy Analysis (CEPA) in Washington, DC, and host of television shows broadcast in the Balkans. Bugajski has authored 20 books on Europe, Russia, and trans-Atlantic relations and is a columnist for several media outlets. His recent books include Conflict Zones: North Caucasus and Western Balkans Compared (2014), Return of the Balkans: Challenges to European Integration and U.S. Disengagement (2013), Georgian Lessons: Conflicting Russian and Western Interests in the Wider Europe (2010), Dismantling the West: Russia’s Atlantic Agenda (2009), America’s New European Allies (2009); and Expanding Eurasia: Russia’s European Ambitions (2008). Please visit his website at https://www.jbugajski.com/.

S. Enders Wimbush is a Distinguished Senior Fellow at The Jamestown Foundation, where he is one of the project leaders for Russia in Decline. He is also Partner at StrateVarious LLC. From 2011 to 2012, he served as Senior Director, Foreign Policy and Civil Society, at the German Marshall Fund of the United States. Before joining the German Marshall Fund, Mr. Wimbush served as Senior Vice President of the Hudson Institute, Washington, D.C. He spent many years in the private sector with Booz Allen Hamilton and Science Applications International, directing analyses of future security environments for both government and corporate clients. Mr. Wimbush served as a member of the United States Broadcasting Board of Governors during 2010–2012, and during 1987–1993 as Director of Radio Liberty in Munich, Germany. Mr. Wimbush founded and directed the Society for Central Asian Studies in Oxford, England from 1980 to 1987. Before this, from 1976 until 1980, he served as analyst of Soviet affairs at the Rand Corporation in Santa Monica, California. Mr. Wimbush completed graduate work at the University of Chicago and, as a Fulbright Fellow, at Moscow State University. He is the author, co-author or editor of seven books and numerous articles in professional and popular media, as well as dozens of policy studies. His ideas have appeared frequently in professional, policy and popular media, including The Wall Street Journal, Washington Post, Los Angeles Times, Washington Times, Christian Science Monitor, Journal of Commerce, National Interest, Survival, Global Affairs, and The Weekly Standard. 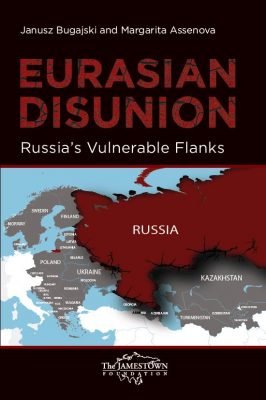 The Jamestown Foundation was proud to host a webinar on... END_OF_DOCUMENT_TOKEN_TO_BE_REPLACED

Jamestown Foundation Analyst Richard Arnold was interviewed by PolitiFact for a story on the Lie of the Year 2022, or Putin’s long list of lies... END_OF_DOCUMENT_TOKEN_TO_BE_REPLACED

This product is out of stock. A retrospective of the 20 years of independence experienced by the countries of the South Caucasus clearly demonstrates the difficulties involved in building a state and restoring an economy after more than 70 years of Soviet rule. Each one of the three post-Soviet... END_OF_DOCUMENT_TOKEN_TO_BE_REPLACED