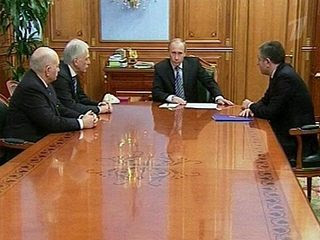 Georgia’s former Prime Minister Zurab Noghaideli who currently serves as the leader of the opposition Movement for a Just Georgia and is one of the fiercest critics of President Saakashvili visited Moscow several times in December 2009 to meet with some influential figures in the Russian political establishment. But in a quite unexpected development, during his latest trip to the Russian capital on December 23 he met with Vladimir Putin, and it was for the first time that the Russian prime minister openly received a Georgian oppositionist.

According to the Russian premiere’s official website, Noghaideli did not meet with Putin tête–à–tête. Rather, the meeting was also attended by Chairman of the Supreme Council of the United Russia party Boris Gryzlov and Moscow Mayor Yury Luzhkov who sat at the sides of the table, underscoring hierarchy among the participants.

Surprisingly enough, the formal subject of the discussion “was not political” but Vladimir Putin’s recent initiative “to restore the monument to Great Patriotic War heroes” in Moscow. http://www.regnum.ru/news/fd-abroad/georgia/1238120.html) The monument which had stood for a few decades in Georgia’s second largest city Kutaisi was demolished by the Georgian authorities on December 19 to clear the area for the construction of a new parliament building. The implosion of the Soviet-era monument caused a real brouhaha all across Russia and became yet another reason for the Kremlin to condemn the Georgian government. The Russian foreign ministry promptly issued a statement calling the demolition of the monument “ state vandalism” and “ blasphemy.” and Vladimir Putin on his part soon stated, “this is sad testimony to the fact that [the Georgian government’s] political agenda is contrary to the people’s interests” according to the official website of the Prime Minister of the Russian Federation, December 23, 2009, http://premier.gov.ru/eng/events/news/8686/). Once again, the Russian leadership attempted to draw a clear line between its relationship with the Georgian government and “the ordinary Georgian people,” claiming all along that it would have no relation with the current authorities in Tbilisi but would build partnership with those who still consider the Soviet Union “our common Fatherland.”

Noghaideli’s response to Putin’s initiative was reciprocal. He said: “I would like to thank you, Mr Putin, for the initiative to rebuild the monument here in Moscow…but in my view, our prime objective is to restore this monument in Kutaisi, where it belonged. We pledge to do so as soon as we come to power.” The Georgian oppositionist also added: “in my opinion Saakashvili is pursuing political goals and intends to sever the remaining ties between Russia and Georgia. I believe this issue is also worth discussing.”

It remains unclear from the transcript available on the Russian prime minister’s official website whether or not the participants of the discussion touched upon political issues but many in Georgia allege that they could not avoid “the question of Saakashvili.”

As Georgia has started to move away from its Soviet past – and with that the Russian political orbit – over the past several years following the peaceful Rose Revolution in 2003, the Russian leadership has had several attempts to destabilize or outright oust the government in Tbilisi. Economic pressure and other “soft” means all failed one by one to produce the result the Kremlin hoped for. Even the war in August 2008 did not bring about “a regime change” in the Georgian capital. Similarly, pro-Moscow figures have all been unsuccessful so far to attract hearts and minds of the Georgian public. Until very recently, the Russian leadership looked to favor such marginal personalities of Georgian origin as Georgia’s ex-KGB chief Igor Giorgadze or Alexander Ebralidze, who leads a Moscow-based pro-Kremlin organization.

As it appears from the highly publicized meetings held by Noghaideli with the Russian political establishment, the Kremlin seems to have moved to a more or less mainstream Georgian political spectrum to achieve its strategic objectives vis-à-vis Georgia It could also be true that Georgia’s former prime minister who served under President Saakashvili until two years ago and is better familiar with Georgia’s current political and economic situation is just the tip of the iceberg directed toward the pro-Western Tbilisi from Russia’s icy waters.

Back
Working Toward Banking Transparency In U..Next
The Georgian Dimension of the 2014 Sochi..

The Jamestown Foundation is pleased to host a forthcoming webinar... END_OF_DOCUMENT_TOKEN_TO_BE_REPLACED