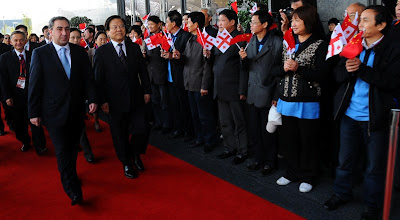 On October 24, 2010, Georgian Prime Minister Nika Gilauri kicked off his nine-day tour of China and India. Accompanied by his top economic team, Gilauri met in Beijing with China’s Vice Premier, Zhang Dejiang, to discuss a “broad spectrum of political and economic issues” and explore opportunities for “strengthening the already fruitful cooperation” between the two nations. In India, where Gilauri traveled on October 30, the Georgian delegation took part in the Invest in Georgia Forum that attracted Indian companies interested in the Georgian market.

As reported by Georgian media and later confirmed by the Georgian prime minister himself, the Chinese vice premier told his Georgian counterpart that his government “encourages Chinese companies” to deepen collaboration with Georgia and make investments in the Georgian economy. Gilauri called this kind of encouragement “a political decision” on the part of the Chinese government. A Georgia-China business council will soon be created to address trade and economic issues and Georgia expects hundreds of millions of US dollars in Chinese investments “in a matter of two to three years.”

For its part, Tbilisi offers a set of incentives in terms of the better use of the country’s transit potential for China’s air and land travel to and from Europe, including the establishment of a direct flight between Tbilisi and Beijing, multimillion energy projects in Georgia’s hydro power sector and in general making Georgia a “regional logistical hub” in the Caucasus for Chinese businesses and tourism.

The free economic zones at Georgia’s Black Sea ports could offer a different set of opportunities, Tbilisi hopes, to Chinese industries as they try to explore new markets in the wider Black Sea region and the Middle East. Four-season tourism potential is one of Georgia’s prides. The country, with a population of five million, has already attracted more than one million foreign tourists this year mainly to its subtropical sea resorts and the capital. Georgians expect more visitors to come as the ski season soon starts in the Caucasus Mountains in less than a month. Wine is another asset of Georgia and a variety of Georgian wines was on display in Shanghai’s renowned World Expo as Prime Minister Gilauri was given a tour in the Georgian pavilion during the National Day for Georgia event.

Gilauri held separate meetings with representatives of China’s investment companies, banking, technology, automobile and energy sectors. In India, he met with entrepreneurs who are interested in investing capital in Georgia’s steel and textile industries, agriculture as well as tourism and infrastructure projects and film production.

Georgia’s liberal economic reforms have found international acclaim and over the past several consecutive years the country has been in leading positions worldwide in terms of ease of doing business, business and investment attractiveness and efficient anti-corruption policies. Despite the Russian invasion in 2008 and the ongoing international economic crisis, Georgia’s GDP has grown by 6% in the nine months of 2010, although the growth is less impressive than the two-digit numbers that existed during several years before the war.

Georgia dramatically intensified its diplomatic, political, economic and trade relations with the outside world after the 2003 Rose Revolution but, paradoxically, the Caucasus nation’s openness only increased after the Russian aggression. Tbilisi apparently hopes that a greater international presence in the Georgian economy and a diversification of Georgia’s economic and trade ties will only help its long-term political objectives in addition to providing for steadier and more robust economic growth.

The Jamestown Foundation is pleased to host the webinar, “The... END_OF_DOCUMENT_TOKEN_TO_BE_REPLACED