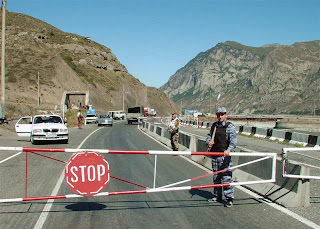 On March 1, the Russo-Georgian border opened after months of speculations and rumors about the benefits and disadvantages the unblocking of the passage would bring to Russia, Georgia, Armenia, and the Europeans involved in the settlement of the Georgian-Russian standoff.

The only legal border crossing between Russia and Georgia at Upper Larsi-Kazbegi in the Caucasus Mountains had been closed for almost four years as part of punitive measures imposed by Moscow on Tbilisi in 2006. Other measures implemented to change Georgia’s foreign policy orientation and force it to return to the Russian orbit included the closing of all types of railroad, maritime, air and postal communications with Georgia as well as the embargo on all Georgian products.

Now that the border is open, some pressing questions emerge. Should the opening of the border crossing checkpoint be seen as a step to détente between Moscow and Tbilisi? Does Tbilisi allowing the passage to become operational find itself in a better position or the measure should be seen as a miscalculation on its part? What are the political risks Tbilisi is facing now?

One part of the border calculus is Armenia. Its interest in the operability of the Georgian-Russian border is both well-founded and well-documented. Russia’s only ally in the Caucasus, which also manages to have friendly relations with Georgia, Armenia has pushed hard for the reopening of the border, seeking economic benefits from the cheapest transportation corridor to the Russian Federation through Georgian territory. Tellingly, a day before Larsi became operational, Armenian President Serzh Sargsyan paid a visit to his Georgian counterpart Mikheil Saakashvili in the Black Sea city of Batumi. Although Sargsyan was not escorted to the top-notch border crossing facilities near the Georgian town of Kazbegi, made possible with America’s generous financial and technical support, he used his no less impressive Batumi experience to praise the burgeoning Armenian-Georgian ties and the steps the two countries take to meet each other’s interests.

On its part, Georgia is very interested in having good relations with Armenia. Tbilisi has never made it secret that its readiness to open the border with Russia is dictated by its desire to help mitigate Armenia’s problems stemmed from the latter’s landlocked geography and relative isolation.

Georgians also point to the fact that Russia’s decision to unblock the border is “an indirect acknowledgement” by the Kremlin that “the economic embargo has suffered a political fiasco.” Besides, speaking to the press on March 2, the Georgian president’s spokesperson underscored that “having a closed border…is more dangerous than a legally open border.”

Nonetheless, the parties’ expectations and calculations significantly differ. Unlike the EU representatives who see the move as a “first step” toward normalizing the Russo-Georgian relations, Tbilisi has repeatedly stated that normalization is possible only after Moscow fully implements the 2008 ceasefire agreement, withdraws its troops from occupied Georgian territories and denounces its recognition of Abkhazia and “South Ossetia” as independent states.

While Georgia has a “package” approach in its relations with Russia, the European Union would be happy even if some modest steps are taken by the two sides, which could be seen as thawing the relations between Moscow and Tbilisi. The EU’s view is apparently shared by Russia since the latter, feeling that it should do something – or at least pretend that it is doing something – has lately expressed willingness to engage with Georgian public and the Georgian Church and has even started talking about lifting the economic embargo and reintroduce airline flights. On the other hand though, there are no diplomatic relations between Tbilisi and Moscow; the Russian leaders refuse to recognize President Saakashvili’s government and, Georgia and the Georgians mean two very different things to the Kremlin. On its part, Tbilisi says it would never allow having three Russian embassies on Georgian soil – in Tbilisi, Sokhumi and Tskhinvali.

As far as the negative consequences are concerned, Tbilisi is downplaying the possibility that the opening of the border might harm the Georgian population in the Kazbegi district bordering on Russia. Arguing that all appropriate measures have been taken to provide security on the spot, Tbilisi calls “unfounded” some Georgian politicians’ fears that Moscow might use the legal passage to send its spies into adjacent Georgian regions. Tbilisi officials have also claimed that the legal status of the border crossing (whether it is closed or open) would mean little to nothing to the Russians should they decide to invade Georgia once again. As a matter of fact, the Larsi passage as well as its extension, the Georgian Military Road, leading to the Georgian capital Tbilisi was avoided by the Russians during their military aggression in 2008. It is difficult to prove to what degree this was an issue of military expediency, geography, and political calculation.

Although arguably the opening of the border does not seem to be increasing the probability of new military invasion from the north and would apparently have little if any influence on Georgia’s domestic security, political risks for Tbilisi are more than obvious. One such risk could be the Kremlin successfully selling to the West its narrative that it is capable of restoring relations with the Georgians without first settling the outstanding sovereignty and territorial issues with Tbilisi. That would only distance the West from the Georgian-Russian dispute, making Tbilisi even more vulnerable.

Back
Ukraine: Can Yanukovych Force Tymoshenko..Next
Russian Leader Meets Burjanadze: What is..

The War in Ukraine and the Growing Risk of Russia’s... END_OF_DOCUMENT_TOKEN_TO_BE_REPLACED

On September 11, Jamestown Foundation Senior Fellow Janusz Bugajski was interviewed by the Polish Naval War Academy regarding his book, Failed State: A Guide to Russia’s... END_OF_DOCUMENT_TOKEN_TO_BE_REPLACED

The July 2015 issue of Militant Leadership Monitor covers militants from Libya to Pakistan. Nicholas Heras begins with a brief on Muhanna Jaffala, an Aleppan student turned rebel leader who was just severely injured in an assassination attempt. Heras follows with another on Faraj al-Barassi, the Libyan National Army’s colonel who... END_OF_DOCUMENT_TOKEN_TO_BE_REPLACED