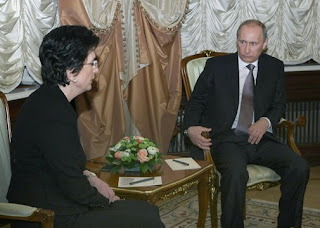 On March 4, Russian Prime Minister Vladimir Putin received one of the leaders of Georgia’s pro-Russian forces Nino Burjanadze. The ex-speaker of the Georgian parliament went into opposition of President Saakashvili after her demand to include some Soviet-type politicians on the ruling United National Movement party list during the spring 2008 parliamentary election campaign was decisively rejected by Saakashvili’s supporters in Georgian Parliament.

Before leaving for Moscow on March 3, Burjanadze spoke to reporters at the Tbilisi airport: “This is [a] very important visit, I am going there to defend the interests of my country and my people…The position of [Russia] is important for Georgia’s unity, for Georgia’s democratic and sovereign development…I am occupied by big politics; while others are occupied with mayoral elections and the authorities are occupied by carrying out black PR campaign against the opposition, I am doing big politics.”

Burjanadze who had led three-month-long rallies in the spring of 2009 aimed at President Saakashvili’s liberal government’s resignation follows the footsteps of her comrade, another champion of the pro-Kremlin cause in Georgia, ex-prime minister Zurab Noghaideli, who already secured Putin’s audience and favor in late December 2009 and concluded a pact of friendship with Russia’s ruling United Russia party.

During his meeting with Burjanadze, Putin underscored that “by relying on those people who want to have normal relations with Russia we will be able to restore the pre-crisis level of our relations.” Putin apparently meant not only the pro-Russian political figures in Georgia but also representatives of Georgian intelligentsia who, he hopes, are nostalgic about the Soviet past.

Big politics or not, Burjanadze, the leader of the party Democratic Movement-United Georgia, hardly raised the issue of Georgia’s sovereignty and territorial integrity. At least, this is the conclusion one can draw from the comments she made after meeting with Putin. “I participated in this meeting not to talk about the past, but to try to find solution for the future. It’s up to historians to talk about the past.”

With the Russian premier at the center of Burjanadze’s Moscow trip, she also met with Foreign Minister Lavrov as well as Boris Gryzlov, speaker of the Russian Duma and other high-ranking officials in the Kremlin establishment. Noghaideli and other oppositionists in Georgia’s pro-Russian spectrum hailed Burjanadze’s decision to engage with the Russians “without ultimatums.” At the same time, they were prompt to remind the public that Burjanadze had changed her previously held conviction that “dialogue with Russia was possible only after it meets certain preconditions.” Irakli Alasania, another Georgian oppositionist declined to comment on Burjanadze’s visit while representatives of the ruling party and the parliamentary opposition as well as the pro-Western figures in the non-parliamentary opposition subjected the ex-speaker to harsh criticism.

Putin, purportedly, firmly in charge of the Kremlin’s Georgia policy, seeks to achieve several objectives. First, he wants to isolate President Saakashvili with whom he vows he will have no relationship. Second, he wants to show the international community, especially the Europeans, that engagement with Georgia is not only possible but desirable by circumventing the sitting government in Tbilisi; the pressing issues of Georgia’s sovereignty and territorial integrity could be successfully avoided by the Kremlin if it dealt with some “prominent” Georgians instead of the Georgian government. Third, Putin wants to dodge international criticism that Russia is not doing enough to settle the dispute with Tbilisi; he can now show the West that he is engaged in dialogue with Georgian oppositionists (and at least with some portions of Georgian society), that he has opened the border with Georgia through the Larsi checkpoint, and that he will make good on promises of future change (such as resumption of airline flights, the lifting of embargos on Georgian products, etc.) if Georgians behave and stop talking about their sovereignty and territorial integrity.

Nonetheless, the major aspect of Putin’s Georgia strategy is his bid to establish a reliable base of support among the Georgian public via granting favors to the pro-Russian oppositionists and their followers. The support is badly needed whether he succeeds in ousting the Georgian government by peaceful means, or resorts to military force to achieve the same objective.

Back
Hard Questions Loom as the Russo-Georgia..Next
Troubling Signs in Ukraine As New Presid..

The Jamestown Foundation is pleased to host the webinar, “The... END_OF_DOCUMENT_TOKEN_TO_BE_REPLACED