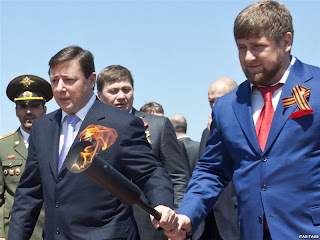 By Valery Dzutsev
On September 8, Alexander Khloponin, Moscow’s envoy to the North Caucasus, for the first time publicly rebuked the ruler of Chechnya, Ramzan Kadyrov. The Chechen youth want more freedom than Kadyrov allows, Khloponin asserted, adding, “The youth in Chechnya lack freedom. They want to be more dynamic. We have some problems with that, it is obvious. I cannot fully agree with many of his [Kadyrov’s] principles. However, we are having a serious dialogue”. At the same time Khloponin dismissed claims that Kadyrov was involved in the killings of his opponents in Russia and abroad (http://gazeta.ru/news/lenta/2011/09/08/n_2001257.shtml).
Khloponin made these remarks at a meeting with foreign journalists, where he had to show off his fastidiousness about Ramzan Kadyrov’s management methods. It is very common for the Russian leadership to appear more liberal to a foreign audience, than to the domestic one. But at least this can be seen as a sign that Kadyrov with his methods no longer constitute a reason for Moscow to be resolutely proud of him.
The level of power personification in Chechnya has apparently reached the point, where some criminals mimic Kadyrov’s voice to get ahead. On September 8, Gazeta.ru quoted an Interfax news agency report about three Chechens who were sentenced to five year prison terms for extorting money from businesses and bureaucrats by imitating Kadyrov’s voice over telephone (http://www.gazeta.ru/news/lenta/2011/09/08/n_2001049.shtml).

Moscow may dislike Kadyrov for variety of reasons, including his unprecedented level of autonomy from the central Russian government. However, Kadyrov’s critics in Moscow may be particularly emboldened by the Chechen ruler’s inability to prevent brazen attacks in the republic. The latest double suicide attack that took place in Grozny on August 30 is but one example. These attacks may signify that Kadyrov and Russia have reached the limit of their ability to stabilize this republic. Chechnya’s shaky level of stability is unlikely to be surpassed under the present leadership, or as long as their current set of policies continues.

Back
Hungary’s MiGs Up for SaleNext
Moscow’s Financing of Sochi Olympics 2..

The Jamestown Foundation is pleased to host the webinar, “The... END_OF_DOCUMENT_TOKEN_TO_BE_REPLACED

In this Quarterly Special Report (QSR), we focus on the foreign fighters who have flocked to the Syrian conflict from around the world. From the Caucasus to the Black Sea to Indonesia, the Syrianconflict has attracted militants from various corners of the globe to fight against Bashar al-Assad’sregime. The... END_OF_DOCUMENT_TOKEN_TO_BE_REPLACED