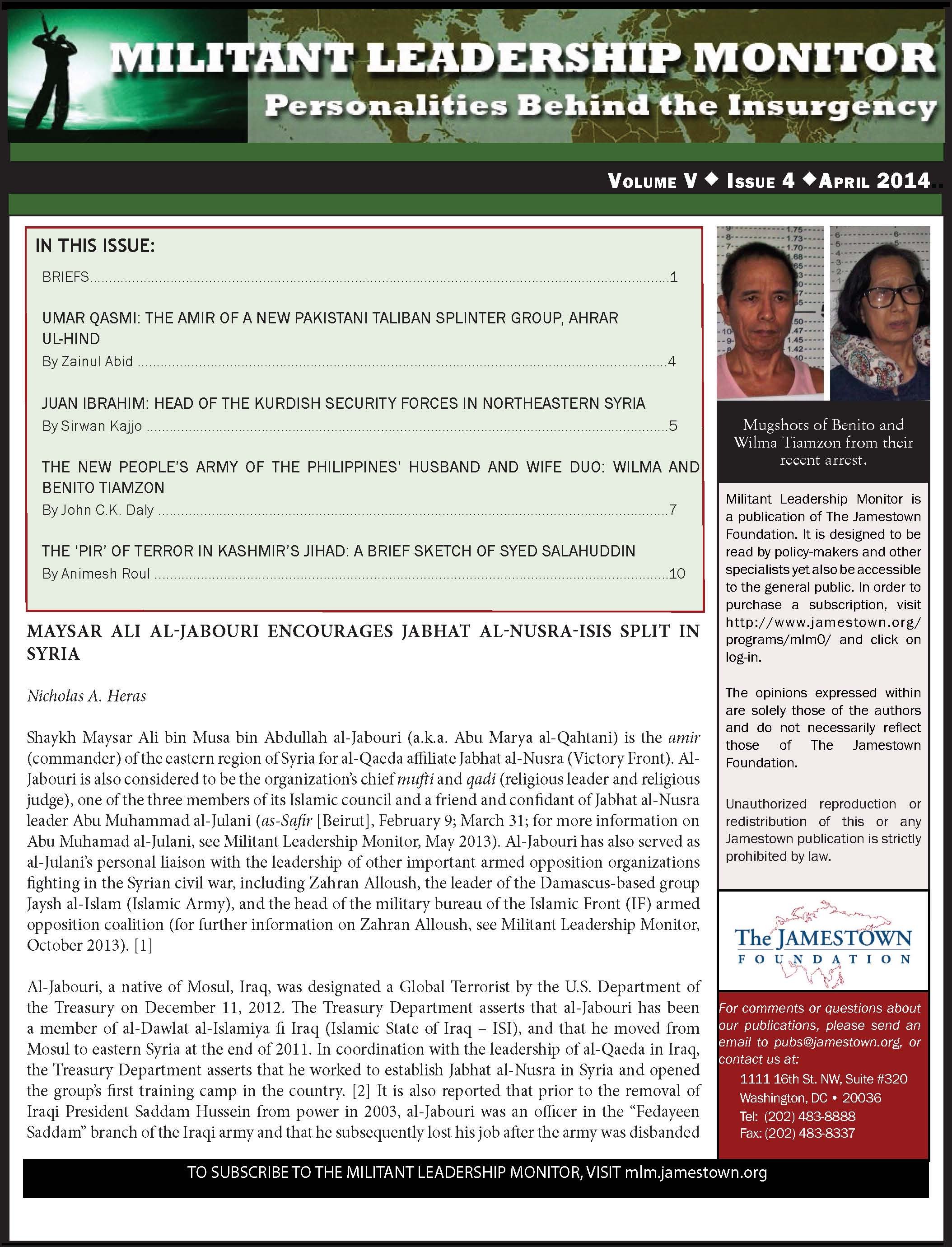 The April issue of Militant Leadership Monitor begins with a profile of Maysar Ali Al-Jabouri, a Jabhat al-Nusra amir who is encouraging the split between al-Nusra and ISIS in Syria. This is followed with the next brief covering the connection between anti-balaka militias and Patrice Edouard Ngaissona in the Central African Republic. Zainul Abid provides a sketch of Ahrar ul-Hind leader Umar Qasmi who recently broke away from the Pakistani Taliban. Sirwan Kajjo follows with a snapshot of the leader of the Asayish Kurdish security forces in Syria, Juan Ibrahim. Next, John Daly offers a profile of Benito and Wilma Tiamzon, the husband and wife team behind the New People’s Army in the Philippines who were recently arrested. The issue concludes with a look at Syed Salahuddin of Hizbul Mujahideen who has been involved with militant efforts in Kashmir for decades by Animesh Roul.

In this month's issue of Militant Leadership Monitor, Jamestown analysts have written about militant and criminal underworld figures across the globe. In light of the rising tension between Lebanese Sunnis and Shiites that is being expressed in Syria, Murad Batal al-Shishani drew up a portrait... MORE
$20.00 – $25.00 Select options
In this “Special Report on The Syrian Uprising: A Focus on Parties and Leadership” we examine the roles of key religious, military, and political actors in the Syrian uprising. This 2012 Quarterly Special Report features five brand-new articles commissioned by The Jamestown Foundation and one highly... MORE
$20.00 Select options
The December Issue of Militant Leadership Monitor features two briefs by Nicholas A. Heras. The first focuses on the recent announcement by eastern Syrian militant leader Saddam al-Jamal of his change of allegiance from the Free Syrian Army to al-Qaeda. The second brief provides a snapshot of Osama Amin al-Shihabi... MORE
$20.00 – $25.00 Select options
This issue of Militant Leadership Monitor includes profiles of Saudi Arabia's Ahmed Abdullah Saleh al-Khazmari al-Zahrani, AQIM's Jemal Oukacha, Libya's Isa Amd al-Majid, the Niger Delta's al-Haji Mujahid Dokubo-Asari (Part Two), and a look at leaders of Ansar al-Sharia in Tunisia.
$20.00 – $25.00 Select options

The Jamestown Foundation is pleased to present the hybrid in-person... END_OF_DOCUMENT_TOKEN_TO_BE_REPLACED

On November 17, Jamestown Foundation Senior Fellow Olevs Nikers was interviewed by Romania-based outlet Veridica regarding, among other topics, the best possible outcome for the... END_OF_DOCUMENT_TOKEN_TO_BE_REPLACED

The September 2015 issue of Militant Leadership Monitor begins with a brief on Saqr Abu Qutaiba, the leader of a Syrian armed rebel group who would like to receive training and weapons from the United States. This is followed by a brief on Shaykh Saleh bin Farid bin Muhsin... END_OF_DOCUMENT_TOKEN_TO_BE_REPLACED