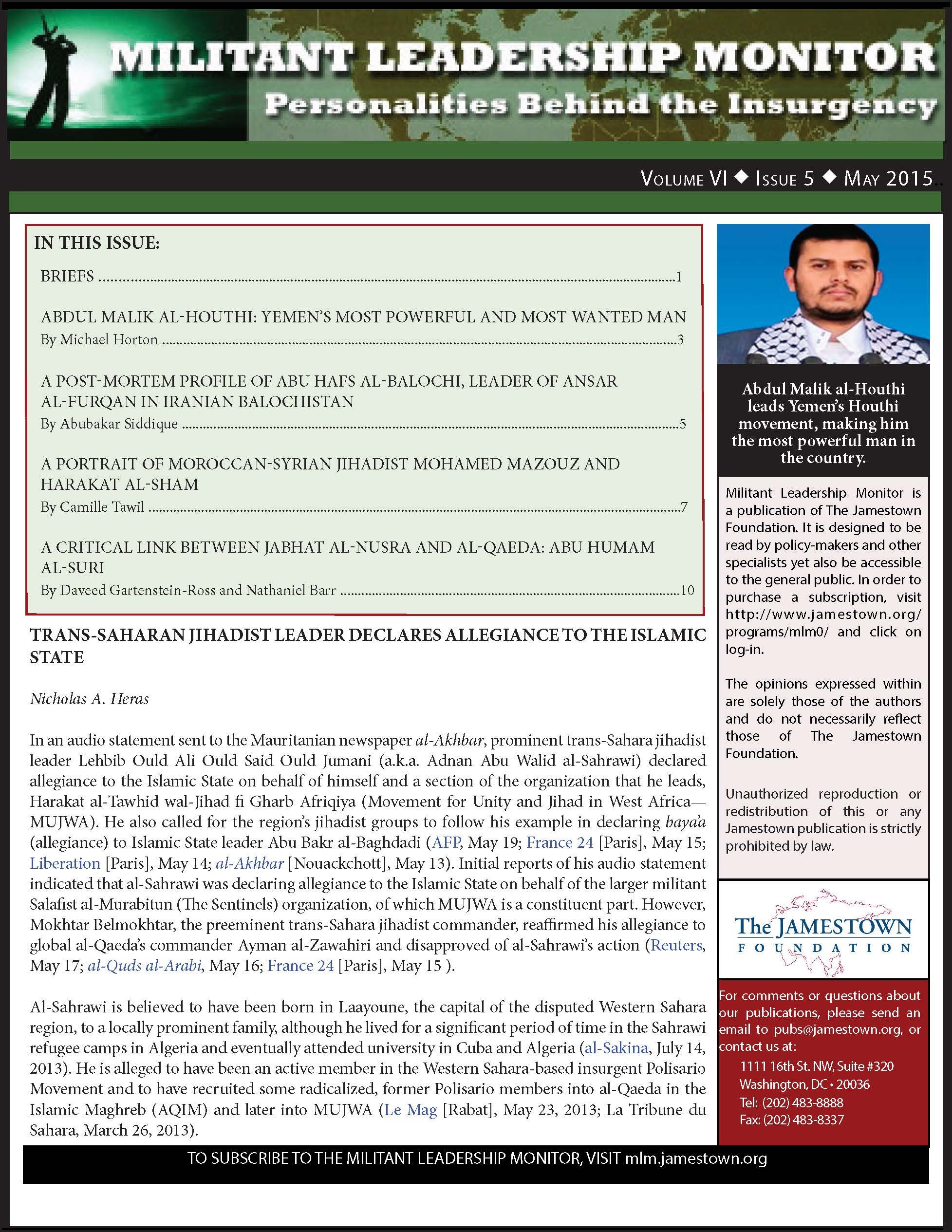 The May 2015 issue of Militant Leadership Monitor begins with a brief on trans-Saharan jihadist Adnan Abu Walid al-Sahrawi, who recently switched allegiance from al-Qaeda to the Islamic State, by Nicholas Heras. He follows with another on Abu Humam, who leads one of the local jihadist groups to defend the al-Yarmouk Palestinian refugee camp outside of Damascus. Abdul Malik al-Houthi, leader of the Houthi movement in Yemen and the most powerful man in the country at the moment, is profiled by Michael Horton. Abubakar Siddique offers a post-mortem look at Iranian Balochistan separatist leader Abu Hafs al-Balochi. This is followed with a portrait of Mohamed Mazouz, a former Guantanamo detainee who now leads Moroccans in Syria, by Camille Tawil. Finally, Daveed Gartenstein-Ross and Nathaniel Barr detail the life of Abu Humam al-Suri, an al-Qaeda veteran who now plays a key role in Jabhat al-Nusra in Syria.

The March issue of Militant Leadership Monitor begins with an update on the efforts of Abu Ayman al-Iraqi, a deputy of ISIS commander Abu Bakr al-Baghdadi, in Eastern Syria. This is followed with a profile of Muhammad Ali Tambako and his expulsion as the vice-chairman... MORE
$20.00 – $25.00 Select options
This issue of Militant Leadership Monitor includes profiles of Alghabass ag Intallah, Syrian Major General Abdulaziz al-Shalal, Who's Who in the Jordanian Opposition, Mullah Nazir the "Good Taliban" and Female PKK leader Sakine Cansiz.
$20.00 – $25.00 Select options
In this “Special Report on The Syrian Uprising: A Focus on Parties and Leadership” we examine the roles of key religious, military, and political actors in the Syrian uprising. This 2012 Quarterly Special Report features five brand-new articles commissioned by The Jamestown Foundation and one highly... MORE
$20.00 Select options
This issue of Militant Leadership Monitor includes profiles of Saudi Arabia's Ahmed Abdullah Saleh al-Khazmari al-Zahrani, AQIM's Jemal Oukacha, Libya's Isa Amd al-Majid, the Niger Delta's al-Haji Mujahid Dokubo-Asari (Part Two), and a look at leaders of Ansar al-Sharia in Tunisia.
$20.00 – $25.00 Select options

The Jamestown Foundation is proud to present a webinar on China’s... END_OF_DOCUMENT_TOKEN_TO_BE_REPLACED

On May 19, Voice of America posted an interview with Dr. Richard Arnold on the topic of Russian Cossacks’ involvement in the war against Ukraine. END_OF_DOCUMENT_TOKEN_TO_BE_REPLACED

Over the past several years, the unique and widely misunderstood country of Belarus has risen to the attention of policymakers in Europe and the United States. Though for centuries an important invasion corridor across the plains of North Central Europe, its strategic importance had been overlooked by post–Cold War... END_OF_DOCUMENT_TOKEN_TO_BE_REPLACED