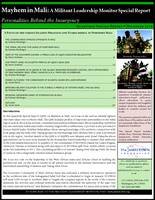 In this Quarterly Special Report (QSR) on Mayhem in Mali, we focus on the various Islamist fighters who have taken over northern Mali. The QSR includes profiles of important personalities in the Sahel region such as Abou Zeid, a brutal, committed and resilient militant under whose leadership AQIM has become extremely realist and results-oriented. A portrait is also provided of former AQIM leader Mokhtar Belmokhtar whose strong knowledge of the territory and connections with local gangs have allowed him to play a prominent role in the region. Another sketch in the QSR is of AQIM’s new Saharan amir Jemal Oukacha whose appointment can be seen as an attempt by the Boumerdes-based leadership to reassert their authority in the wild Sahara/Sahel sector. A snapshot of  the commander of MUJWA’s Osama bin Laden brigade, Ahmad al-Tilemsi, is included along with description of MUJWA’s split from AQIM, which occurred under his leadership in 2011. The concluding profile is of veteran Tuareg rebel Iyad ag Ghali, the head of Ansar al-Din a religiously-oriented armed group.

We focus not only on the leadership of the West African states and African Union in tackling the problem but also on the lack of resolve by all parties involved in the military intervention and the interrelated assembling of Islamist and Tuareg rebel forces.

The December Issue of Militant Leadership Monitor features two briefs by Nicholas A. Heras. The first focuses on the recent announcement by eastern Syrian militant leader Saddam al-Jamal of his change of allegiance from the Free Syrian Army to al-Qaeda. The second brief provides a snapshot of Osama Amin al-Shihabi... MORE
$20.00 – $25.00 Select options
The March issue of Militant Leadership Monitor begins with an update on the efforts of Abu Ayman al-Iraqi, a deputy of ISIS commander Abu Bakr al-Baghdadi, in Eastern Syria. This is followed with a profile of Muhammad Ali Tambako and his expulsion as the vice-chairman... MORE
$20.00 – $25.00 Select options
In this Special Report on the Libya Elections we examine the entrance of militant leaders into the political scene as the country recovers from several decades of Gaddafi's rule. This 2012 Quarterly Special Report features five articles and a timeline commissioned by The Jamestown Foundation.... MORE
$20.00 – $25.00 Select options
In this month's issue of Militant Leadership Monitor, Jamestown analysts have written about militant and criminal underworld figures across the globe. In light of the rising tension between Lebanese Sunnis and Shiites that is being expressed in Syria, Murad Batal al-Shishani drew up a portrait... MORE
$20.00 – $25.00 Select options

The Jamestown Foundation is proud to present a webinar on “Broken... END_OF_DOCUMENT_TOKEN_TO_BE_REPLACED

On January 9, The New York Times ran an article on a scandal involving Hong Kong government elites that featured an interview with Jamestown Senior... END_OF_DOCUMENT_TOKEN_TO_BE_REPLACED

The December issue of Militant Leadership Monitor features a brief on Aleem Khan, a North Waziristan militan leader who recently joined Tehreek-e-Taliban; a look into Sayf Abdulrab Salem al-Hayashi, AQAP’s financial conduit into the Yemen-Somalia weapons trade; a profile of Debretsion Gebremichael, the leader of the Tigray People’s Liberation... END_OF_DOCUMENT_TOKEN_TO_BE_REPLACED