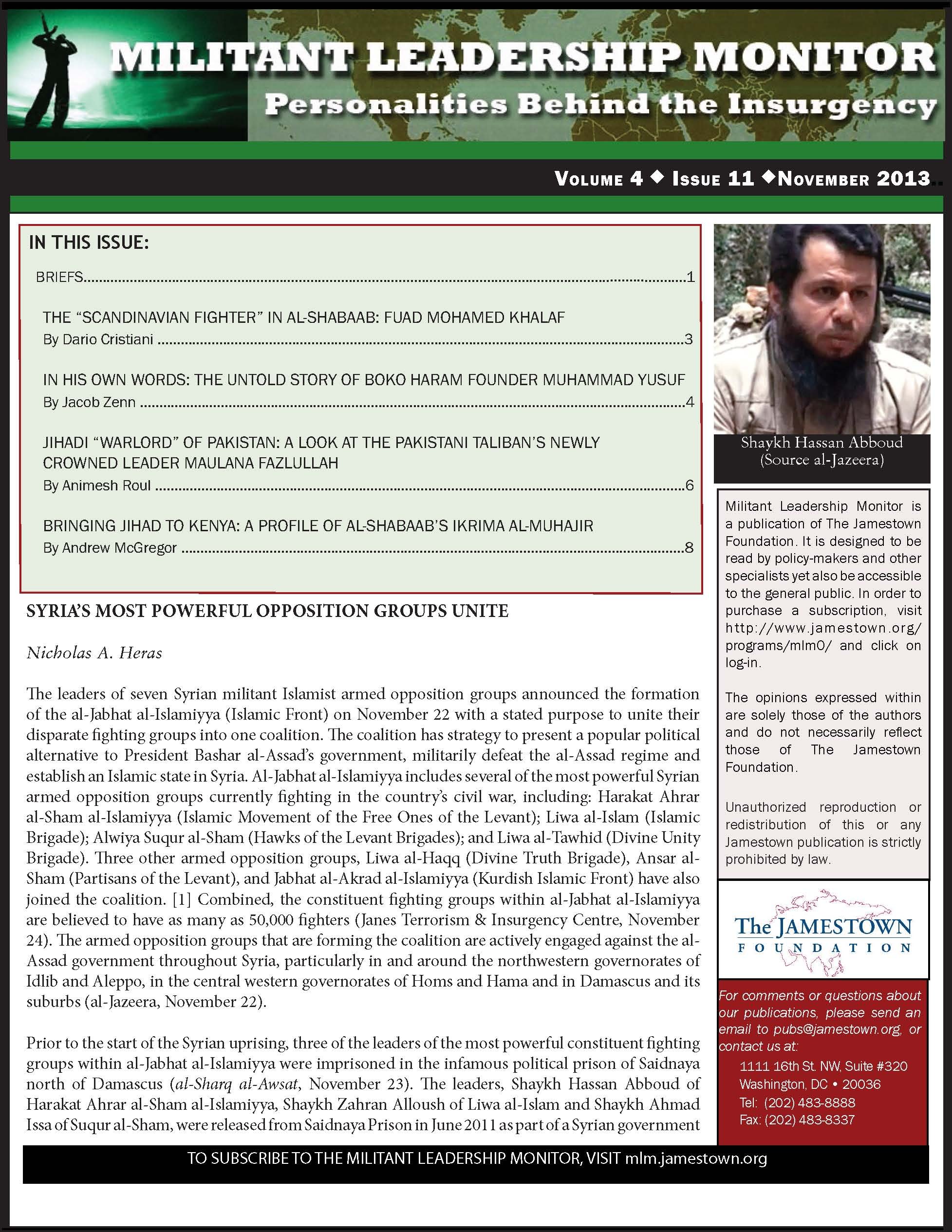 The November Issue of Militant Leadership Monitor features two briefs by Nicholas A. Heras. The first focuses on the recent announcement of the formation of al-Jabhat al-Islamiya (Islamic Front), a coalition of seven powerful opposition groups in Syria, with a look at one of its most prominent leaders, Shaykh Hassan Abboud. The second brief provides a snapshot of Shaykh Ahmad Issa who has been described as the new overall leader of al-Jabhat al-Islamiya. Dario Cristiani provides the first profile of Fu’ad Muhammad Khalaf, al-Shabaab’s Somali-Swedish militant. Next, Jacob Zenn takes a look at Boko Haram founder Muhammad Yusuf, as an individual and as a preacher, to develop a better understanding of him and his impact. Animesh Roul follows with a portrait of the new Pakistani Taliban leader Maulana Fazlullah. The concluding profile by Andrew McGregor is of al-Shabaab’s Ikrima al-Muhajir.

The May 2014 issue of Militant Leadership Monitor begins with two briefs on rival Libyan militia commanders. Shaykh Sha’ban Mas’oud Khalifa Hadia commands the day-to-day operations of Operations Room for Libya's Revolutionaries, a pro-government militia while Uthman Mliqta and Liwa al-Qa'qa are with General Haftar. Animesh Roul... MORE
$20.00 – $25.00 Select options
In this Quarterly Special Report (QSR) on the conflict in South Sudan, we focus on the civil wars, border disputes and rivalries between ethnic groups that have resulted in over half a century of violence in the country. The QSR begins with an overview by... MORE
$20.00 – $25.00 Select options
In this Quarterly Special Report (QSR) on the rise of al-Shabaab, we focus on the various militants who are guiding al-Shabaab, an al-Qaeda-aligned militant organization that aims to impose Shari’a in Somalia. The group began as a radical youth wing of Somalia’s Islamic Courts Union... MORE
$20.00 – $25.00 Select options
In this “Special Report on The Syrian Uprising: A Focus on Parties and Leadership” we examine the roles of key religious, military, and political actors in the Syrian uprising. This 2012 Quarterly Special Report features five brand-new articles commissioned by The Jamestown Foundation and one highly... MORE
$20.00 Select options

The Jamestown Foundation was proud to host a webinar on... END_OF_DOCUMENT_TOKEN_TO_BE_REPLACED

Jamestown Foundation Analyst Richard Arnold was interviewed by PolitiFact for a story on the Lie of the Year 2022, or Putin’s long list of lies... END_OF_DOCUMENT_TOKEN_TO_BE_REPLACED

Years before Shamima Begum and Hoda Muthana made international news for their attempts to leave the Islamic State, renowned terrorism analyst Halla Diyab began writing articles for The Jamestown Foundation documenting numerous cases of Western women being radicalized in their home countries and becoming aggressive, motivated agents for jihadist... END_OF_DOCUMENT_TOKEN_TO_BE_REPLACED