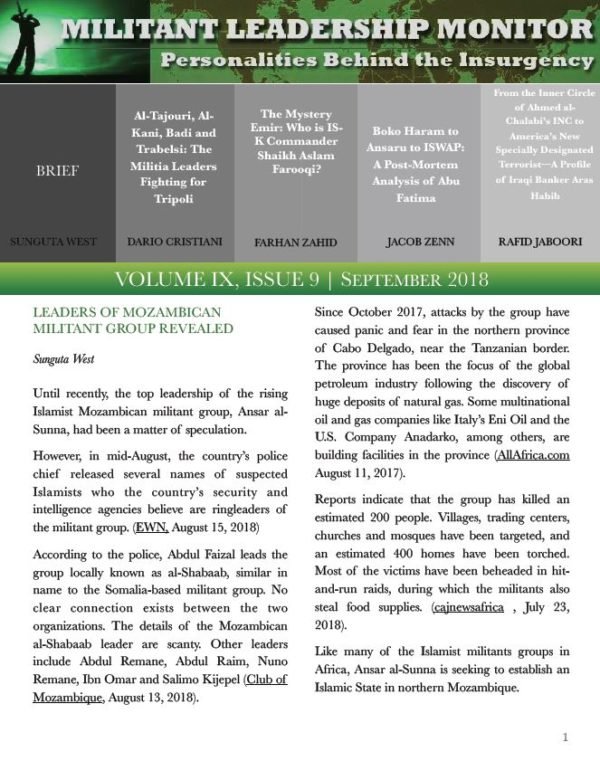 The September 2018 issue of Militant Leadership Monitor features a brief on the leaders of a Mozambican militant leaders recently revealed by local police; as wells as a synopsis of the multiple Libyan militant leaders responsible for the recent violence in Tripoli; a profile of Shaikh Aslam Farooqi, the commender of Islamic State – Khurasan; a post-mortem analysis of the shifting loyalties of Abu Fatima, who in his life was associated with Boko Haram, Ansaru, and ISWAP; and a piece on the Iraqi banker and politician recently designated a terrorist by the U.S. government for his links to Iran and Hezbollah, Aras Habib.

This issue of Militant Leadership Monitor includes in-depth analyses of Ansaru's Khalid al-Barnawi, the Niger Delta's al-Haji Mujahid Dokubu-Asari, succession scenarios after Talabani, and the second part of a who's who in the Jordanian Opposition.
$20.00 – $25.00 Select options
In this Quarterly Special Report (QSR) on the conflict in South Sudan, we focus on the civil wars, border disputes and rivalries between ethnic groups that have resulted in over half a century of violence in the country. The QSR begins with an overview by... MORE
$20.00 – $25.00 Select options
This issue of Militant Leadership Monitor includes profiles of Saudi Arabia's Ahmed Abdullah Saleh al-Khazmari al-Zahrani, AQIM's Jemal Oukacha, Libya's Isa Amd al-Majid, the Niger Delta's al-Haji Mujahid Dokubo-Asari (Part Two), and a look at leaders of Ansar al-Sharia in Tunisia.
$20.00 – $25.00 Select options
This issue of Militant Leadership Monitor begins with two Briefs, covering Congo's M23 leader Sultani Makenga and Malian Militant Cheibane Ould Hama. The issue continues with a small montage of leaders to watch in post-Mursi Egypt, by Michael W.S. Ryan. Dominic Kalms provides an in-depth... MORE
$20.00 – $25.00 Select options