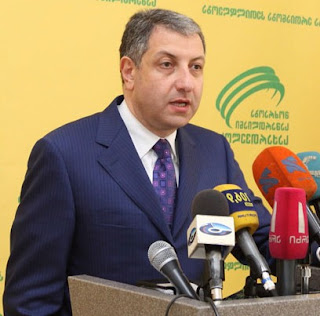 As it has already been reported, Georgia’s former prime minister who now leads the opposition Movement for a Just Georgia, Zurab Noghaideli, visited Moscow several times in December 2009 (http://jamestownfoundation.blogspot.com/2010/01/former-prime-minister-zurab-noghaideli.html). During one of his visits to the Russian capital, he was received by Prime Minister Vladimir Putin and this was the first time that the Russian leader openly met with a Georgian oppositionist.

The 45-year-old Zurab Noghaideli served as prime minister of Georgia under President Mikheil Saakashvili from February 2004 to November 2007, when he resigned, citing poor health condition. Before his premiership, he was a member of Georgian Parliament (1992-2000) and the minister of finance (2000-2002) under ex-President Shevardnadze. For one year before the November 2003 Rose Revolution, which resulted in Shevardnadze’s resignation, Noghaideli was involved in entrepreneurial activity before once again becoming the finance minister in early 2004 under the newly-elected President Saakashvili. During his tenure as prime minister, Zurab Noghaideli rarely expressed his views on Georgia’s foreign policy, concentrating almost exclusively on economic issues. The same is true for the one-year period following his resignation, between November 2007 and December 2008, when he emphatically stayed out of politics and engaged himself in business activity instead.

Zurab Noghaideli’s ascendance to political personality came shortly after Russia’s military aggression against Georgia in August 2008 when he started to slowly accelerate his rhetoric against President Saakashvili’s domestic and foreign policies. In December 2008, he established his own opposition party, the Movement for a Just Georgia (http://www.civil.ge/geo/article.php?id=20139). Unlike Georgia’s ex-speaker of the Parliament Nino Burjanadze and the former envoy to the U.N. Irakli Alasania, though, Noghaideli was only tangentially involved in three-month-long opposition protests in mid-spring to early summer 2009, aimed at President Saakashvili’s resignation. After the street protests failed, he then started to exploit the window of opportunity presented by now politically bankrupt radical oppositionists who had refused to enter Parliament and wanted to promote their agenda through questionable and semi-legal ways. This background is important in order to better understand Noghaideli’s growing clout over Georgia’s fragmented and disarrayed non-parliamentary opposition parties.

Unlike other oppositionists who ostensibly presented themselves as pro-Western politicians—but still adamantly tried to get rid of the pro-Western Saakashvili government—Noghaideli has not shied away from being seen as an openly pro-Russian figure. And while other exes and formers, such as Burjanadze and Alasania, found it necessary to travel to Western capitals to promote themselves as pro-Western and pro-NATO “alternatives” to President Saakashvili (even during the notorious street protests last year), Noghaideli’s major travel destination has almost exclusively been the Russian capital, leaving no doubt about his political taste and foreign policy orientation. This is by far the biggest difference between the ex-prime minister and all of the other opposition figures.

By no means does this mean that Noghaideli has already monopolized the Russian favor or that other oppositionists have not clandestinely tried in the past or will not openly attempt in the future to gain Moscow’s political backing and financial support. What this means is that Noghaideli is first to openly present the Georgian public with a real alternative to what President Saakahsvili stands for; a U-turn in Georgia’s foreign policy direction. Noghaideli’s neutrality agenda which is in fact a euphemism for alliance with Russia has already sent powerful shockwaves to the largely pro-U.S. and pro-NATO Georgian public but there are several reasons why “the Noghaideli alternative” could soon become a significant portion of Georgian society in a real and palatable way.

77% of Georgians supported their country’s NATO membership in a plebiscite held in January 2008 (http://www.civil.ge/geo/article.php?id=17323). Alas, this indisputable public support along with the Georgian government’s considerable contributions to the allied operation in Afghanistan and the advantages presented by Georgia’s location in the strategically important Caucasus region—where the West’s and Russia’s geopolitical interests traditionally collide—was not enough to secure an action plan leading to NATO membership.

What Georgia received in its place at the NATO Bucharest summit in April 2008 was the Western leaders agreeing that someday that country would become a member of NATO. Moscow assessed the Alliance’s indecisiveness as a signal to act as soon as it could to change Tbilisi’s foreign policy orientation, and the military aggression against Georgia followed in a mere four months after the Bucharest summit. Although Russia failed to bring about a “regime change” in the Georgian capital, the ongoing occupation of Georgian territories in Abkhazia and Tskhinvali is a handicap already obstructing Georgia’s road to membership in the Alliance, notwithstanding the fact that until a pro-Western force remains in power in Tbilisi, Russia’s victory in the August war will be seen as partial and potentially reversible.

The Georgian public’s disappointment with the West’s inability to prevent the Russian aggression has further deepened, as no connection is seen to be made between full restoration of NATO-Russia cooperation and de-occupation of the Georgian territories. With the NATO-Russia military-to-military cooperation now revitalized (http://www.nato.int/ims/news/2010/n100126a-e.html), Georgians’ sense of abandonment and disillusionment is growing, leaving ample room for those who advocate rapprochement with Russia at the expense of Georgia’s foreign orientation.

As reported by media, Noghaideli plans to once again visit Russia, this time to boost cooperation between his Movement for a Just Georgia and United Russia, the ruling party in the Russian Federation (http://www.georgians.ru/news.asp?idnews=36437). He has already developed close ties with pro-Kremlin Georgian organizations operating in Moscow, including the Union of Georgians in Russia (http://www.georgians.ru/chapter.asp?idunit=8&idchapter=8), and traveled to Ukraine to secure funds for pro-Russian opposition TV channels in Georgia (http://www.fact.ge/news.aspx?i=1b26260d-1e74-49f4-ae79-140889003d0c).

Noghaideli has repeatedly stated that without a radical change in Georgia’s foreign policy priorities his country’s “destruction will continue” (http://tbiliselebi.ge/?mas_id=2221&jurn_id=3&rubr_id=1). He recently organized a conference in Tbilisi “to hear what experts and politicians have to say on Georgia’s foreign policy” (http://www.interpressnews.ge/ge/index.php/permalink/123517.html&hd_line=1) and speaking to the press before the conference on January 26, Noghaideli warned that “there is danger of Georgia’s further dismemberment” if Tbilisi’s current course continues.

The former prime minister has already secured support from several political parties. The leader of the opposition Conservative Party Zviad Dzidziguri, who also attended the conference, had earlier stated that “thinking about NATO is counterproductive” (http://www.myvideo.ge/?act=dvr&chan=imedi&seekTime=21-01-2010%2020:14) and called for “a broad public debate” on the issue (http://www.rustavi2.com/news/news_textg.php?id_news=35263&pg=1&im=main&ct=0&wth=). At least one non-parliamentary opposition leader, former foreign minister Salome Zourabichvili, who herself is very critical of President Saakashvili, has harshly criticized Zurab Noghaideli and his political allies in the opposition for “engaging in dialogue with a country, which recognized Abkhazia and South Ossetia as independent states” (http://www.civil.ge/geo/article.php?id=22270). In her interview with Georgian media she has distanced herself from “people playing Russia’s game” and described the oppositionists who frequent Moscow as “marginal politicians” “trying to undermine Georgia” (http://www.ambebi.ge/politika/15913-qar-minda-saakashvili-moskovma-moashorosq.html).

Analysts argue that only the United States’ and Europe’s closer engagement with Tbilisi and greater participation in solving Georgia’s outstanding problems with its northern neighbor could prevent a U-turn in Georgia’s foreign policy which would thwart both Georgia’s historical chance to reunite with the West and the West’s goal to promote peace, security, cooperation and democracy in Eurasia.

Back
From Russia with LoveNext
Ukraine: Will Yanukovych Dodge the Debat..

The Jamestown Foundation is pleased to host a forthcoming webinar... END_OF_DOCUMENT_TOKEN_TO_BE_REPLACED

Jamestown Foundation Analyst Kseniya Kirillova offered her expert analysis on Putin’s “partial mobilization” announcement to G-Zero. “The Kremlin calls it ‘partial’ so as not to... END_OF_DOCUMENT_TOKEN_TO_BE_REPLACED

The January 2022 issue of Militant Leadership Monitor features a piece on the newest attempt by the DRC to curb ISCARP activities, Operation Shujaa. The issue follows this brief up with a look into the Islamic State’s newest anti-China propaganda weapon Muhammad al-Uyghuri. The final two pieces showcase in-depth... END_OF_DOCUMENT_TOKEN_TO_BE_REPLACED