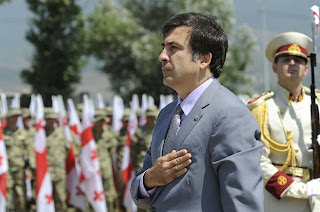 On August 7, Georgia will commemorate the two-year anniversary of the Russian aggression of 2008, the consequences of which continue to haunt the Georgian public and government alike. Some 20 percent of Georgian territory in Abkhazia and the Tskhinvali region/South Ossetia remains under Russian occupation, and the military bases Russia established there pose a constant threat to Georgia’s sovereignty and political independence. Nonetheless, Tbilisi’s main focus has been on development and modernization coupled with robust diplomacy and closer international engagement.

Notably, Georgian President Mikheil Saakashvili will spend the war anniversary far away from his country in Bogota where he will be participating in the inauguration ceremony of Colombia’s new president, Juan Manuel Santos. Georgian government officials and political commentators have been emphasizing all along that closer ties with Latin America and the Caribbean would benefit Georgia both politically and economically.

Firstly, given the fact that two Latin American countries, Venezuela and Nicaragua, have recognized the independence of the two Georgian regions, and with that Russia’s right to a sphere of influence, diplomatic engagement with the neighbors of those states would discourage them to follow suit. Tbilisi, which has dramatically sped up the process of establishing diplomatic relations with Latin American and Caribbean countries, has already opened its embassy in Brazil and intends to have one in Mexico before the end of the year.

The second aspect is Georgia’s thirst for foreign investment. Tbilisi hopes that its liberal economy and diplomatic engagement will pair nicely to boost trade with and attract investment from Latin America. Tourism is another field in which Georgia may find good partners in the Americas. The country has a new minister of economy and steady development, and its chief, the young and energetic Vera Kobalia, who was born in Abkhazia and is also a Canadian citizen, places tourism high on her agenda. She has recently overhauled the tourism department and organized an open contest to select its head. Maia Sidamonidze, a young woman who until now worked as a marketing manager in London’s hotel industry, won the highly-competitive contest.

Georgia plans to develop new ski resorts in Svaneti, a northwestern mountainous region of the country, where snow lasts year-round. Svaneti is so close to the Black Sea that when the project is finished in about two years it will be possible, as Saakashvili recently said, to go skiing in Svaneti half an hour after a good swim in the subtropics of Georgia’s Black Sea beach at Anaklia. “It is the only place in Europe,” the Georgian president was quick to add, “where this kind of miracle is possible.”

“Our enemy had been preparing for the war for three years before attacking us in August 2008,” Saakashvili told a gathering on August 4 at the cemetery where the Georgian soldiers killed in the Russo-Georgian war are buried, “but they failed to achieve their major goal; that is to overthrow our democratic government and do away with our sovereignty and political independence….Furthermore, to their great astonishment, we are developing politically and economically and are advancing our freedoms.” A few days earlier, on July 28, the Georgian president publically endorsed a new military doctrine of “total defense” when speaking at the ministry of defense of Georgia. In Saakashvili’s words, “each village should be able to defend itself,” as “Russia has not dropped its plans to occupy the entire country,” he said.

An emphasis on diplomacy, development and modernization, and a keen awareness of Russia’s “unfinished business” in Georgia, are closely intertwined in the Georgian leadership’s mindset. It remains to be seen whether a strategy of modernization would help the Georgians avoid another Russian invasion or only convince the Russians that now is the time, before Georgia becomes unrecognizable. Since the times of Athens and Sparta, it has been a well-known belief that one country’s economic development could be, for various reasons, as threatening for a neighbor as its military build-up.

Back
Tigipko to be Yanukovych’s Successor a..Next
Russia’s Love-Hate Relationship with A..

The War in Ukraine and the Growing Risk of Russia’s... END_OF_DOCUMENT_TOKEN_TO_BE_REPLACED

On September 11, Jamestown Foundation Senior Fellow Janusz Bugajski was interviewed by the Polish Naval War Academy regarding his book, Failed State: A Guide to Russia’s... END_OF_DOCUMENT_TOKEN_TO_BE_REPLACED