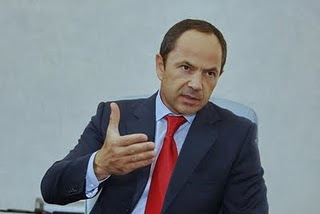 In an interview in Kyiv’s Segodnya Nestor Shufrych revealed that the gas lobby is financing Deputy Prime Minister Sergei Tigipko as a future leader of the Party of Regions to replace Viktor Yanukovych and Nikolai Azarov. Azarov and Yanukovych have shared leadership of the Party of Regions since it was established in 2001 and are now 62 and 60 years old, respectively.

Tigipko was the dark horse of the 2010 presidential elections, coming in third place as an allegedly ‘new face candidate’ with thirteen percent of the vote. Ukrainians joke that Tigipko and Tymoshenko were both born in 1960 and both entered politics in 1998 but somehow the former is a ‘new face’ and the latter an ‘old hand’.

The RUE’s (RosUkrEnergo) support for Tigipko is not out of character as it also initially invested in Arseniy Yatseniuk, who came fourth with seven percent, as another ‘new face’ in the early part of the 2010 election campaign. Yatseniuk – like Tigipko – was seen as the best alternative to Tymoshenko, whom the Party of Regions sees as the main opposition and threat to its interests. In a recent Ukrayinska Pravda interview Levochkin praised Yatseniuk, Tigipko and some other minor opposition politicians as exhibiting future potential but ignored Tymoshenko.

Both Yatseniuk and Tigipko have always supported a ‘constructive opposition’ stance, a peculiar mid-way position between being in power and in opposition, that does not exist in a typical European democracy. Tymoshenko has described ‘constructivists’ as a ‘pocket opposition’ loyal to the authorities.

Following the 2010 elections Tigipko agreed to join the Azarov government, after initially stating he would not, while Yatseniuk remained in ‘constructive opposition’. ‘Constructivists’ like Yatseniuk have refused to join the Committee in Defence of Ukraine, established in May as an umbrella opposition group. One reason could be Yatseniuk’s new source of funding being Deputy Prime Minister Borys Kolesnykov, a fact revealed to the author by a Ukrainian political consultant once close to Yatseniuk.

Yatseniuk has admitted that Viktor Pinchuk, Ukraine’s second wealthiest oligarch and Kuchma’s son-in-law, provided his 2010 election campaign with the largest amount of financing. In return, Pinchuk demanded in June 2009 that Yatseniuk replace his Ukrainian with Russian political consultants that proved to be disastrous and reduced his popularity.

Conspiracy theorists, such as the political consultant who talked with the author on the condition of anonymity, believed the switch to Russian consultants was undertaken deliberately to open up space for Tigipko as a late ‘new face’ candidate. With Shufrych revealing the Party of Regions future plans for Tigipko, we now know why the Yanukovych campaign wanted Tigipko to do well in this year’s elections. Yatseniuk, who in the early part of the campaign was only a few percentage points behind Tymoshenko and could have therefore entered the second round, ended up in fourth place, receiving only half of Tigipko’s vote.

Back
Mergers and Acquisitions Putin-StyleNext
Optimism Prevails as Georgia Commemorate..

The Jamestown Foundation is pleased to host a forthcoming webinar... END_OF_DOCUMENT_TOKEN_TO_BE_REPLACED