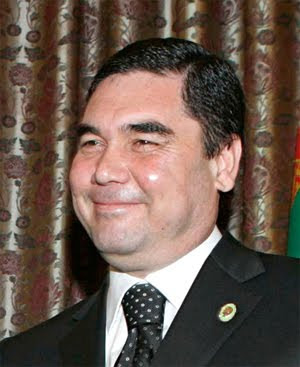 As the summer of 2009 comes to an end, a rash of political maneuvers has begun on the Central Asian gas pipeline front. The greatest interest centered on Turkmenistan President Gurbangully Berdumykhamedov’s visit to Bulgaria and Turkey in late August where he promoted his country’s willingness to join the Nabucco pipeline project.

His key stop was Antalya, Turkey where he met with his counterpart Abdullah Gul who appears prepared to mediate in a border dispute between Azerbaijan and Turkmenistan over important oil and gas fields in the Caspian Sea. If an agreement can be reached between the two regional energy giants, it would greatly improve Turkmenistan’s chances of selling gas to European consumers via the future Nabucco pipeline.

Turkmenistan is desperately in need of customers for its gas following Russia’s decision to stop buying Turkmen gas in April 2009 following an explosion in the Central Asia Center pipeline. In late 2008 Gazprom had contracted to purchase some 47 billion cubic meters (bcm) of Turkmen gas mainly for sale to the Ukrainian market. According to Kommersant daily from mid- April to the end of August, Turkmenistan has lost $3 billion in gas sales revenue.

After the drop in demand for gas in Ukraine in 2009 due to the world-wide recession along with lower demand in the EU, Gazprom was saddled with high-priced Turkmen gas. Gazprom spokesmen began demanding that the contract with Turkmenistan be renegotiated to reflect new market realities.

However, Turkmenistan’s recent support of the Nabucco pipeline project does not mean that more revenue from gas sales will begin flowing into Ashgabat soon. While forthcoming sales to China of 10 bcm and 6 bcm to Iran will help fill the coffers, there still remains 47 bcm of unsold gas and this gas will remain unsold unless a deal is struck with Russia.

Ukrainian President Viktor Yushchenko recently floated the idea that Ukraine buy Turkmen gas directly. However, all the transport routes from Turkmenistan to Ukraine go through Russia and it is unlikely that Gazprom will allow Ukraine to renege on its January 2009 ten year contract to buy all of its imported gas from Russia.

The Kremlin meanwhile is keeping a close eye on Berdumykhamedov’s trip as it prepares talking points and develops a new approach to Turkmenistan for Russian President Dmitry Medvedev to present during his visit to Ashgabat on September 13. Gas will head the list of topics to be discussed and given the instability today of the Russian gas industry – due to dropping production and reduced export revenue – Medvedev’s trip will test his skill as a negotiator in a region which today is the epicenter of the “Great Pipeline Game” between the West and Russia.

“The Great Pipeline Opera” is how Daniel Freifeld, director of international programs at New York Universities Center on Law and Security titled his excellent article in the August 24 issue of Foreign Policy magazine. Freifeld provided this piece of insight into how the libretto of this “Opera” is sung in Russian.

“If recent experience teaches anything, it is not to count Russia out, especially when so much is at stake. When I raised this issue with Russian Energy
Minster Sergei Shmatko at a meeting in Bulgaria in April, he shot me a threatening glare and cautioned against planning for an energy future without Russia,unless the Europeans were fully prepared to deliver it. “We have an expression in Russia,” Shmatko told me, “Don’t sell the skin off a bear before you kill it.”

Back
ON VACATIONNext
Georgia's Efforts to Protect Its Territo..

The Jamestown Foundation is pleased to host a forthcoming webinar... END_OF_DOCUMENT_TOKEN_TO_BE_REPLACED

Jamestown Foundation Analyst Kseniya Kirillova offered her expert analysis on Putin’s “partial mobilization” announcement to G-Zero. “The Kremlin calls it ‘partial’ so as not to... END_OF_DOCUMENT_TOKEN_TO_BE_REPLACED

The September 2020 issue of Militant Leadership Monitor features a brief on the recently killed al-Shabaab leader Abdulkadir Commandos; a look at the al-Qaeda media chief Husam Abd al-Rauf; an analysis of the background of the new Islamic State-Khorasan Emir, al-Shahab al-Mohajir; an in-depth profile of the local Idlib leader... END_OF_DOCUMENT_TOKEN_TO_BE_REPLACED