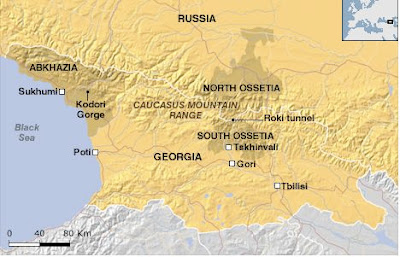 The Kremlin appears to be increasingly incensed at Georgia’s efforts to protect the sovereignty of its territorial waters in the Black Sea. Over the past few days representatives of the Moscow-sponsored government in the occupied territory of Georgia’s Abkhazia region have ratcheted up their rhetoric against Tbilisi, condemning the latter for seizing vessels illegally sailing to and from Abkhazia.

According to the Russian radio station Ekho Moskvy, “the foreign minister” of Abkhazia, Sergei Shamba, stated that “the situation…needs to be addressed…Just over the past few days there have been four cases…of seizures [of vessels). He stressed that “the participation of Russian border guards to protect the Abkhaz territorial waters will be in compliance with the agreement reached with the Russian Federation.” Ekho Moskvy also announced that Russia “will provide security for the vessels present in the territorial waters of Abkhazia.”

Tbilisi calls the Russian decision “piracy,” although, according to the State Minister for Reintegration of Georgia, Temur Yakobashvili, “Georgia is not going to sink Russian ships” and “will instead use international mechanisms” to deal with illegal Russian actions. The Georgian TV station, Rustavi 2, reported on August 29 a statement by the Deputy Chief of the Border Defense Service of the Russian Federation, Lieutenant-General Evgeny Inchin, in which he expressed his outrage at “Georgia’s aggressive moves on the sea” and promised that Russia will take “appropriate measures”.

In regard to the specific measures to be taken by the FSB – under whose authority the Russian border protection service falls – the Russian news agency RIA Novosti said that “the Russian and Abkhaz border guards will be equipped with special motor boats to deal with their tasks”.

According to various Russian sources, FSB officers do not conceal that Russia’s decision to boost its military presence along the Abkhazia sea coast “should be viewed in conjunction with other measures implemented by Moscow in the run-up to the Sochi Winter Olympics in 2014″.

A new ‘sea phase’ of confrontation between Russia and Georgia comes as Tbilisi is desperately trying to increase its defensive capabilities one year after the Russian military aggression that was followed by a Russo-Georgian war in August 2008 and the occupation of Georgian territories in Abkhazia and Tskhinvali. Protection of its territorial waters has been one of Georgia’s top priorities and Tbilisi has indeed seized dozens of ships trying to illegally access Georgian ports along the Abkhazia coast.

When President Saakashvili was introducing the new defense minister Bacho Akhalaia on August 28, he said that “he is not fully satisfied with the preparedness of the Georgian armed forces to contain our very aggressive neighbor.” At the same time the Georgian president lauded Bacho Akhalaia’s organizational skills when during the past few months as deputy defense minister he helped “establish the lines of military fortifications around Tbilisi,” and thanks to his “personal efforts,” “these defense lines are now set in place”.

President Saakashvili also noted that “reforms aimed at bringing Georgia up to NATO standards will continue.” On his part, Mr. Akhalaia said at his first press conference as defense minister that his priorities will be the modernization of the Georgian army, maintenance of peace and integration into NATO.

As Russia continues to boost its military presence in Abkhazia and naval capabilities in Georgian territorial waters, the major priority of the Georgian government is the defense of the capital Tbilisi.

With Russian forces ominously stationed just a few dozen kilometers from the Georgian capital in the region of Tskhinvali, the emphasis on the security of Tbilisi makes perfect sense. On the other hand, President Saakashvili’s government is being urged by supporters to increase international efforts to force Russia to comply with its international obligations, including those related to the safety of navigation and the inviolability of territorial waters.

Signs that Russia might perpetrate illegal actions close to Sochi, which will host the 2014 Winter Olympics, have put pressure on Tbilisi to bring the issue to the attention of the International Olympic Committee.

Furthermore, the Georgian government, according to observers, has to increase pressure on the European Union, the guarantor of the August 2008 ceasefire agreement between Russia and Georgia, to apply more pressure on the Kremlin to comply with the terms of the agreement and withdraw its forces from the occupied Georgian territories.

Moscow’s aggressiveness could take an upward trajectory if it is convinced that the international community ignores or condones its actions. Checking the possible reaction of the West has always been a part of Russia’s operating procedures when it intends to escalate any provocation against its neighbors.

Back
Pipeline Politics: Turkmen President in ..Next
Will Moldova’s New Coalition Succeed?