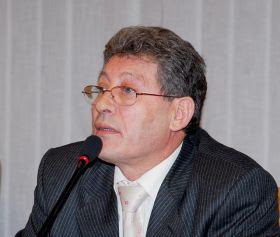 On August 28, Moldova’s brand new parliament elected a brand new speaker – Liberal Party head Mihai Ghimpu. The 58-year-old Ghimpu has been the head of the Chisinau City Council since 2007.

Ghimpu’s election comes on the heels of an opposition victory in the July 29 snap parliamentary elections and the subsequent creation of a majority coalition christened the Alliance for European Integration (AEI).

The AEI favors closer relations with the European Union, particularly with regard to lessoning visa requirements for Moldovans. Both sides also understand that the ongoing issue of smuggling through the separatist republic of Transnistria must be addressed. Finally, the AEI is interested in negotiating with the IMF for assistance.

Before moving forward with EU or IMF talks, however, the AEI must prove itself domestically. This Alliance is the most recent of many; earlier versions have failed. Over the last eight years, under a succession of Communist Party governments, opposition strides were quickly eliminated by infighting, capitulation to the ruling party and political ambition.

In fact, until this year, the work of Moldova’s “democrats” generally has been disappointing. Moldova has become the poorest country in Europe with a population where 1/3 of its citizens are believed to work abroad.

But, just maybe, this year will be different.

The country’s opposition appears to have received a major shove from “the people,” who viewed 5 April parliamentary elections as fraudulent and rose up in protest. The uprisings began a series of moves that ended in the AEI. The protests also appear to have struck fear into the Communist Party for the first time, forcing fairer repeat elections.

The 29 July elections gave the “opposition” 53 of 101 seats and the right to form the government – should the four opposition parties be able to work together.

The election of Ghimpu and a series of well-coordinated statements provide glimmers of hope that the parties may be able to do just that. But, the hard work is just starting.

While the majority coalition has enough votes to name a speaker and prime minister, it will need additional votes from eight Communists to replace Communist President Vladimir Voronin. In Moldova’s parliamentary system, the president is elected by 61 votes.

To deal with this deficiency, Ghimpu announced that the coalition had agreed to nominate former Communist Speaker of Parliament Marian Lupo as president. Lupo resigned from the Party only after the April protests. However, before joining the Communists, he headed the EU’s TACIS program. In August, he claimed that Communist discipline was forced “by repressive measures and fear.”

As if to prove Lupo correct, in response to the election of the speaker, the Communist Party’s leadership insisted all members boycott parliament. This tactic undermines Lupo’s attempts to split the party.

But President Voronin understands the boycott can’t go on forever. This week, he announced his impending resignation – which will happen sometime in the future. He also pointedly threatened one of the coalition leaders: “We will find other ways to deal with you.”

So now the questions become – How far with Voronin go to keep his MPs in line? What will Lupo do to find those eight votes? And after a history of giving in, will the opposition finally hold together?

Back
Georgia's Efforts to Protect Its Territo..Next
The Putin-Medvedev Brawl over Gazprom: W..

The Jamestown Foundation is proud to present a virtual event to... END_OF_DOCUMENT_TOKEN_TO_BE_REPLACED

Russian authorities are extremely divided about the right position to take as Moscow increasingly concerns itself with the Afghan question. They have continually criticized NATO’s decisions though, at the same time, many Russian politicians recognize that the coalition’s failure to stabilize Afghanistan would place Russia in great danger. To... END_OF_DOCUMENT_TOKEN_TO_BE_REPLACED