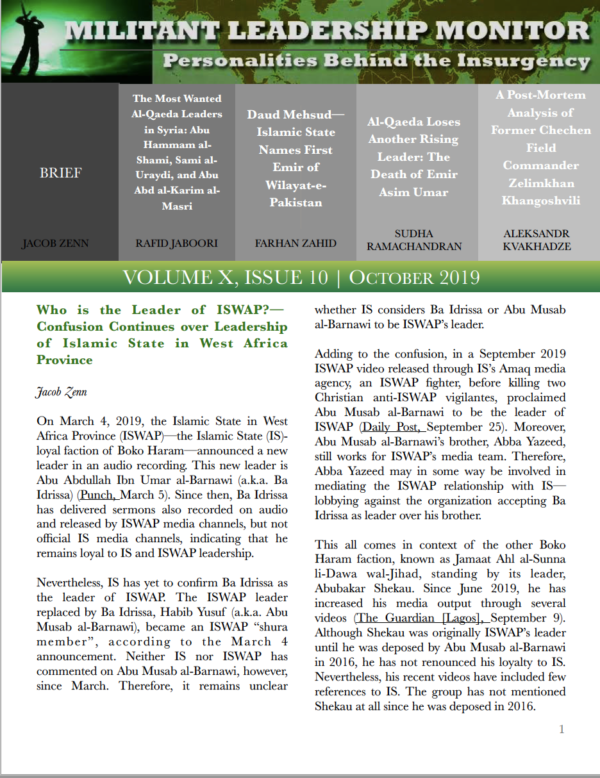 The October 2019 issue features a brief on the ongoing confusion in leadership of Islamic State West Africa Province (ISWAP); a look at the 3 al-Qaeda leaders in Syria that the U.S. State Department released an offer for a reward for information on; a profile on Daud Mehsud, the new emir of Islamic State’s Wilayat-e-Pakistan; an examination of recently killed emir of al-Qaeda in the Indian Subcontinent (AQIS) Amir Umar’s leadership; and a post-mortem analysis of former Chechen Field Commander Zelimkhan Khangoshvili, who was recently assassinated in Berlin.

In this “Special Report on Boko Haram: Nigeria’s Islamist Movement” we examine the rise of Boko Haram’s elusive leader Abu Shekau, and the policies of the group’s charismatic leader – Mohammed Yusuf – the former leader whose death in 2009 led to Abu Shekau’s rise... MORE
$20.00 – $25.00 Select options
This issue of Militant Leadership Monitor includes in-depth analyses of Ansaru's Khalid al-Barnawi, the Niger Delta's al-Haji Mujahid Dokubu-Asari, succession scenarios after Talabani, and the second part of a who's who in the Jordanian Opposition.
$20.00 – $25.00 Select options
The April issue of Militant Leadership Monitor begins with a profile of Maysar Ali Al-Jabouri, a Jabhat al-Nusra amir who is encouraging the split between al-Nusra and ISIS in Syria. This is followed with the next brief covering the connection between anti-balaka militias and Patrice Edouard Ngaissona in the Central African Republic.... MORE
$20.00 – $25.00 Select options
The March issue of Militant Leadership Monitor begins with an update on the efforts of Abu Ayman al-Iraqi, a deputy of ISIS commander Abu Bakr al-Baghdadi, in Eastern Syria. This is followed with a profile of Muhammad Ali Tambako and his expulsion as the vice-chairman... MORE
$20.00 – $25.00 Select options