China’s recent deployment of HQ-9 missiles to the Paracel Islands represent part of a larger effort to consolidate the country’s position in the South China Sea. While the deployment in itself only adds an incremental improvement to China’s ability to control the Paracel Islands, its larger significance lies in its demonstration of Beijing’s determination to strengthen control of the vital water and air space over the objections of its Southeast Asian neighbors, the United States and other countries. Even more worryingly, China’s rising confidence in the moral, legal and, over time, military strength of its position may embolden it to risk a dangerous level of escalation in any militarized crisis involving the Paracels.

This is not the first time China has sent the advanced SAM system to those contested islands. Senior U.S. military officials have confirmed that China sent the missiles at least twice before to participate in exercises (Military.com, February 19). This deployment differs from those previous occasions in that it was not part of any exercise. Moreover, the PLA has operated in the Paracels for decades, even formally incorporating Woody Island as the seat of the prefecture-level Sansha City that administers Chinese territorial claims in the area. China seized the Paracel Islands from then—South Vietnam in 1974. Today only Vietnam and Taiwan also claim ownership of the islands. This is in contrast to the more hotly contested Spratly Islands, in which China’s military presence remains nascent. In addition to the recent extension of the island’s airstrip to military-grade, Woody Island also features hardened gun emplacements (China Brief, October 23, 2014). Woody Island has also hosted visits by military ships and airplanes, including deployments of J-11 aircraft (Sina, October 31, 2015).

In military terms, the deployment of the HQ-9 on the Paracel Islands incrementally increases China’s ability to control the airspace immediately surrounding Woody Island. However, its tactical significance increases when deployed in combination with other anti-access, area denial (A2/AD) weapons. Moreover, the weapon carries tactical and strategic implications that can affect the regional security order in peacetime, crisis and in conflict.

The most direct tactical effect in peacetime is to threaten the safety of U.S. surveillance and reconnaissance aircraft that may pass by the islands, such as the U.S. Navy’s P-3 or P-8 patrol planes. China has long protested such missions and sortied fighter aircraft to intercept U.S. airplanes. Deployment of SAM systems such as the HQ-9 or S-300 along the coast or on disputed islands such as the Paracels adds a more threatening way for China to signal its dissatisfaction with the flights. The danger increases if strains in the bilateral relationship embolden Beijing to take provocative measures. Targeting the U.S. patrol planes with the SAM’s targeting radar would represent a highly threatening gesture that could reinforce Beijing’s point, although such a move would carry its own risks of aggravating military tensions with the United States.

The peacetime deployment of a SAM system to the Paracels also establishes precedent for the militarization of Chinese holdings in the Spratly Islands. Over time, China could increase both the scale of military weapons and systems on the Paracels as well as gradually introduce military weapons and platforms in other contested features, such as the Spratly Islands. China could cite any number of military activities on the part of the United States or other regional powers as justification for such an expansion. But the net effect would be to gradually strengthen China’s military edge over a rival disputant and raise the stakes for the United States and any country that might seek to curb Chinese control of the features.

In a crisis involving the South China Sea, deployment of HQ-9 and similar systems to the Paracels, Hainan Island, the southeast coast and, perhaps, the Spratly Islands could strengthen Chinese control of the local airspace. Deployment of HQ-9–armed destroyers, such as the Type 052C or 052D, could provide additional coverage of the airspace, posing a severe threat to aircraft sortied by Chinese opponents. PLA Navy Destroyer zhidui at Zhanjiang, Guangdong Province, and in Sanya both include several such destroyers (China Military Online, September 7, 2015; China News, June 3, 2013). Combined with deployments of military aircraft and ships and surface-to-surface missiles, the SAM umbrella could place China in a strong position to dominate any of its rival neighbors in any crisis around the disputed features and raise the risk of a major escalation in a confrontation involving the United States.

It is true that in a major war, assets stationed on the Paracels, Spratlys, or other islands would be highly vulnerable to attack. After all, the features remain well within range of land-based cruise missiles, such as Vietnam’s P-800 Oniks (range: 600 nm), among other threats. The confined space on remote islands renders useless the HQ-9’s mobility. But attacking missiles on the islands would require striking what China regards as its territory, which would bring its own risks of escalation. If the United States, Vietnam, or other country opted not to hazard major war to remove the missile threat, then options to cope with the HQ-9 in a militarized crisis or clash would become much more limited.

Chinese officials and commentators have in fact depicted the deployment as a “defensive response” to U.S. military activity in the South China Sea. At a press conference on February 25, the Ministry of Defense spokesman mocked U.S. efforts to make the HQ-9 a “hot issue” and claimed the deployment served “defensive purposes” (MOD, February 25). A few weeks prior to news of the deployment, Chinese media reported that Wu Shengli, Commander of the PLA Navy, reportedly warned U.S. Chief of Naval Operations Admiral John Richardson that China’s decision to send military capabilities to the contested region would “completely depend on the level of threat we face” (China Daily, January 22). In the aftermath of reports of the HQ-9 deployment, Chinese commentary has similarly accused the United States of “militarizing” the South China Sea situation and depicted the deployment as a “defensive” response to U.S. “violations of international law” through naval and air operations near Chinese claimed maritime features (People’s Daily Online, February 20). An article in the semi-official populist newspaper, Global Times, explained that China would “respond with countermeasures” to “every provocation from the United States” (Global Times, February 19). It echoed Wu’s warning in declaring that China’s choice of military deployment would “depend on the kind of threat posed by the United States and other outside forces.”

Efforts to depict Chinese military actions as being in the moral and legal right closely follow the style of politics that has prevailed under Xi Jinping. Xi’s pledge of a “bottom line” principle set the tone in rejecting compromise on any territorial or sovereignty issue (China Brief, January 7, 2013). The 2013 defense white paper similarly aims to establish China’s moral high ground in repurposing the Maoist dictum that China will “never attack, but if attacked, we will surely counter attack” from one of defense against invasion to one in which China will “resolutely take all measures necessary to safeguard its national sovereignty and territorial integrity” (SCIO, April 16, 2013). The more confident that Beijing feels that it has the moral and legal upper hand, the more inclined it will be to tolerate risk in any crisis involving the disputed South China Sea islands.

By itself, the deployment of an HQ-9 SAM system to Woody Island only incrementally increases China’s control over the air space in the South China Sea (See map). Its range falls short of Hainan Island and scarcely covers more than a fraction of the vast airspace of the South China Sea. The most immediate threat posed is to aircraft that fly within its range—principally, U.S. reconnaissance and surveillance airplanes. Although China has long challenged the legitimacy of those flights, it is unlikely to shoot down the airplanes unprovoked. In a crisis featuring a military standoff involving U.S. forces in the South China Sea, however, Chinese willingness to risk a crisis to demonstrate its resolve would greatly increase the danger. U.S. commanders would have to weigh the hazards of flying within range of the system against the importance of signaling U.S. resolve and collecting intelligence. However, the threat goes beyond the United States. All other countries that traverse the South China Sea have reason to exercise caution. Indeed, Australian authorities have already expressed concern about potential threats to aircraft passing through the region (The Australian, February 19). Any other regional rival that sought to probe China’s resolve to defend any of its claimed features in the South China Sea could similarly find itself at the receiving end of a military retaliation and all the risks of disastrous miscalculation that such a situation would entail. As China’s confidence in the moral, legal, and, over time, the military strength of its position increases, its leadership will likely show an even greater willingness to tolerate risk for the sake of establishing its resolve to defend its claims.

Short of a crisis, the larger significance remains political and strategic. The deployment signals China’s determination to consolidate its gains in the South China Sea, regardless of criticism by the United States and its allies. Beijing has firmly rejected demands by U.S. authorities to “stop” construction or militarization of its holdings in the South China Sea. China appears equally determined to demonstrate that however much countries in Asia may resent it, they are incapable of impeding Beijing’s pursuit of control over the critical maritime space. It is no coincidence that China has loudly promoted the potential economic gains of its “One Belt, One Road” and other regional economic initiatives at the same time that it has pushed its coercive, but so far non-violent expansion of control over the South China Sea. U.S. efforts to build international pressure through joint patrols and promotion of arbitration through international courts represent the right way to counter China’s moves. However, determining the appropriate level of international pressure to dissuade Beijing remains a worryingly elusive task. 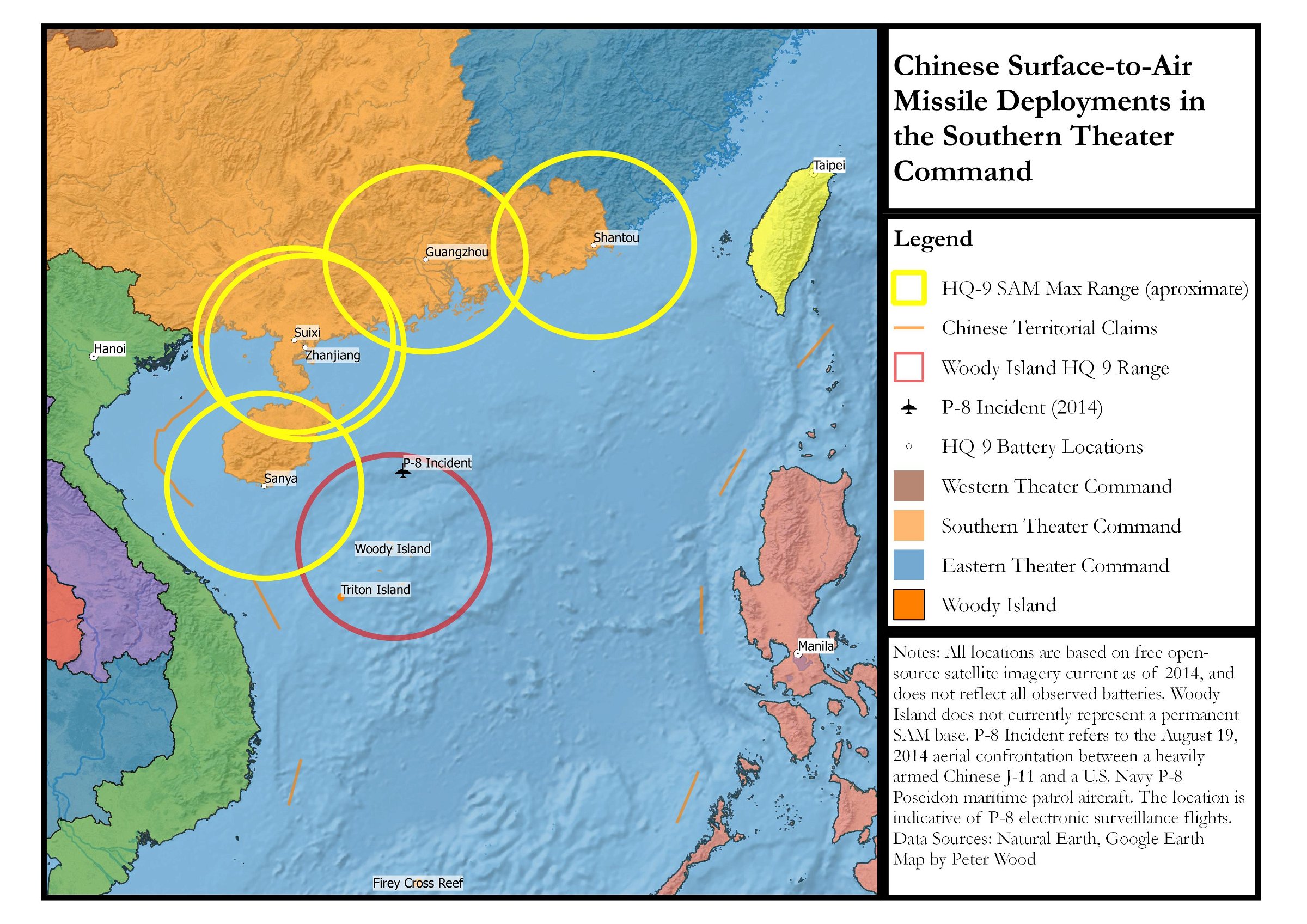 Back
China-Indonesia Relations Heat Up Along ..Next
The Influence of Russian Military Reform..

The Jamestown Foundation is proud to present a webinar on “Broken... END_OF_DOCUMENT_TOKEN_TO_BE_REPLACED

On January 27, The New York Times published an article concerning Russia’s military modernization and its impact on the Ukraine crisis. In the article, Jamestown Board... END_OF_DOCUMENT_TOKEN_TO_BE_REPLACED