Cai Dongjia, party secretary for Boshe village in Lufeng, Guangdong province, and a man otherwise known as “the Godfather of Meth,” was sentenced to death last week (Guangdong Courts, March 7). Cai was arrested in 2014 when 3,000 police raided his village, confiscating three metric tons of methamphetamine and uncovering the involvement of over one-fifth of the households in Boshe village, leading reports to compare it to the television show “Breaking Bad” (South China Morning Post, January 6, 2014). Two weeks ago, police in Harbin—in China’s northeastern Heliongjiang province—apprehended three methamphetamine traffickers after a dramatic car chase ended in a collision later described as a scene from another American series, Fast & Furious (Harbin News, March 9). Although drug busts like these are encouraging and the press they receive is welcomed by the government, they indicate the emergence of unconventional vectors and the unprecedented quantities of locally produced narcotics, two factors that may require Beijing to adopt a new approach, namely, enhanced government transparency and direct coordination with foreign agencies at both the national and local levels.

One of China’s biggest anti-narcotics victories was the recent capture of Sai Naw Kham, formerly a thug whose loyalty belonged to the Shan warlord and opium trader Khun Sa, but who later became head of the drug trafficking organization, Hawngleuk Militia, and as a result, arguably Burma’s most powerful druglord. After initially denying the charges, Kham pled guilty to killing 13 Chinese sailors and was executed in Kunming, the capital of China’s Yunnan province, in 2013 (CCTV, September 20, 2012; Xinhua, September 21, 2012; People’s Daily, March 1, 2013). According to Ai Zhen, a foreign affairs official for Yunnan’s Xishuangbanna, which borders Burma, Naw Kham’s group was the “most powerful” in the entire Mekong region (China Daily, September 20, 2012).

According to Sun Jungong, spokesman for the Supreme People’s Court, from 2007 to 2011, the number of drug-related trials increased by roughly 80 percent (Xinhua, June 26, 2012). Last year, 1.06 million drug users were arrested in China, representing a 20 percent increase from the year before and constituting 14 percent of all criminal cases. Half of these were first-time offenders, 73.2 percent were amphetamine users, 60.6 percent of all users were between 18 and 35 years old and notably, 80 percent of traffickers were farmers or unemployed (South China Morning Post, February 18). In China, drug trafficking is predominantly a young farmer’s game. As the problem continues to explode, it is therefore China’s poorest who will likely suffer most while authorities redouble their efforts, as seen by their execution of individuals found guilty of drug crimes (China Daily, May 28, 2015). Given that these are members of the one-child generation, their executions extinguish family lines, reinforcing the cycle of poverty that likely drove these youths to try their hand at drug trafficking in the first place.

Moreover, as pointed out in an earlier issue of China Brief, China is currently suffering a serious security vacuum whereby law enforcement has become more and more concentrated in urban centers, leaving rural areas increasingly open to criminal activity and putting rural residents, and therefore China’s poorest communities, at greater risk than ever before (China Brief, September 4, 2015). Beijing’s harsh policing and punishment of drug-related crimes may exacerbate ethnic conflict in rural regions without addressing the fact that, in addition to national security concerns, the illicit drug market is also fueling a looming health crisis. For example, methamphetamine use is currently contributing to a spike in HIV cases (China Daily, February 24).

Beijing also uses its media control to promote anti-drug films, television shows, radio programs, and to extract confessions from celebrities found guilty of illegal drug use. In August 2014, Jaycee Chan, Jackie Chan’s son, was caught in Beijing with over 100 grams of marijuana; individuals found possessing more than 50 grams potentially face the death penalty (China Radio International, August 18, 2014). He later made a taped confession, featured on CCTV 13, expressing his regret to family and fans, saying, “I made a big mistake … I did something wrong” (Hong Kong Free Press, February 8). He was released after seven months in prison and his father is now making an anti-drug film entitled Polar Night (Mtime News, June 12, 2015).

As the situation worsens, its transnational nature will require greater collaboration by Beijing with the international community. China’s illegal drug market is presently dominated by heroin, ketamine, methamphetamine, other amphetamines, and cannabis. Each of these is on the rise. From 2014 to 2015, for instance, ketamine seizures increased 140 percent (South China Morning Post, March 4). Liu Yuejin, China’s first counterterrorism chief, said in a statement last year that most opioids in China come from the Golden Triangle (the mountains of Burma, Laos, and Thailand) and the Golden Crescent (the mountains of Afghanistan, Iran, and Pakistan), while the primary domestic sources for methamphetamine and ketamine are Sichuan and Guangdong (China Radio International, June 24, 2015). North Korea is also a significant source for methamphetamine (Vice China, March 20, 2014). Thus, it is imperative to work together in order to staunch the flow of narcotics into China.

Domestic seizures are only half the battle. To strangle the demand that drives the drug trafficking market, China must also tackle exports, since not all drug trafficking within the nation is for domestic consumption. In the first half of last year, New Zealand authorities seized methamphetamine shipments from China totaling over $163 million (USD), a record figure (Global Times, July 22, 2015). Last month, Australian authorities found $900 million worth of liquid methamphetamine—the largest such case in Australian history—hidden in the bras of four Chinese nationals (China Daily, February 16). Days later, Sydney police made the largest methamphetamine seizure in Australian history, intercepting a shipping container from Hong Kong (South China Morning Post, February 20). Further evidence of the international nature of the beast is given by the fact that, of China’s five Interpol Red Notices for drug smuggling, two are ethnic Koreans, one is Nigerian, one is Iranian and one is a Canadian of Iranian descent (Interpol, 2016).

In 2015, following the 11th UN Congress on Crime Prevention and Criminal Justice, Xie Bohua, the Chinese delegation’s counsellor, addressed Chairman Hu Jintao, saying, “to have a drug-free world, the international community must implement international drug control conventions in a comprehensive and effective manner” (Ministry of Foreign Affairs, October 7, 2005). He stressed the importance of working together to stop the flow of precursor chemicals, as well as the duty developed countries have to provide financial and technical assistance to source nations. That year, Hu initiated the Peoples’ War on Drugs and the government passed laws that, to this day, actively inhibit the precursor black market (Ministry of Commerce, November 5, 2015).

China also works to help less developed countries answer the call. To this end, it has signed memoranda of understanding with Burma, Cambodia, Laos, Thailand, Vietnam and the United Nations (China Daily, December 16, 2011). In 2012, China gave $600,000 to Laos for the development of drug rehabilitation centers and $47.62 million to subsidize the farming of crops other than poppy in Burma and Laos (Xinhua, June 5, 2012). Also that year, Beijing and Moscow agreed to work together to combat drug trafficking within the framework of the Shanghai Cooperation Organization Regional Anti-Terrorism Structure (SCO/RATS); Sergei Liu Jianing, director of the Russian Academy of Sciences’ Far East Institute, commented at the time that the sangu shili (三股势力; three evils, i.e. terrorism, separatism and religious extremism) was an outmoded concept because it didn’t include drug trafficking (Russia Beyond the Headlines, September 26, 2012).

China also works to cultivate international efforts with Western agencies. It participates in Operation Purple, an intergovernmental tracking system for potassium permanganate, a precursor used in the production of cocaine, and plays a role in Operation Topaz, an intergovernmental effort to restrict the flow of heroin precursors (People’s Daily, 2002 [accessed March 10]). Last year, Minister of Justice Wu Aiying led a delegation to the 13th UN Conference on Crime Prevention and Criminal Justice, and this year, the US-China Joint Liaison Group on Law Enforcement Cooperation, which deals with anti-drug criminal justice, will convene its 14th session (China Daily, May 31, 2015).

Beijing’s strong stance on drugs had led to criticism that the sentences meted out are too draconian, although there is historical warrant for such severity; drugs are associated with periods of colonial aggression, such as the two Opium Wars, and national weakness, as exemplified by the bainian guochi (百年国耻; Century of Humiliation).

China has zero tolerance for certain drug offenses and makes liberal use of the death penalty in curbing the spread of narcotics, regardless of an offender’s nationality. Juliana Lopez, a Colombian model and television presenter, currently faces the death penalty for smuggling drugs inside her laptop during a recent shopping excursion to China (Chinese Radio International, August 2, 2015).

Last year, President Xi Jinping said, “drugs are a menace for society and a significant issue concerning public security.” He added that the government would strengthen its stance against drugs in the future, observing, “a firm opposition to drugs is the routine standpoint of the Party and the government” (China Daily, June 26, 2015).

But Chinese still faces several challenges, one being corruption. A 2006 report by the U.S. embassy in Beijing noted, “corruption in far-flung drug producing and drug transit regions of the PRC limit the accomplishments of dedicated enforcement officials,” and as the drug market grows, this problem only worsens (U.S. Embassy, Beijing, 2006). Indeed, Cai Dongjia isn’t the only Party member to use illegal drugs; 41 members were expelled for drug use in Yunnan where, according to Yang Fuquan, vice president of the Yunnan Academy of Social Sciences, drug use is a chief cause of corruption (China Daily, December 11, 2014).

In fact, the Guangdong methamphetamine market depends on the availability of certain licit chemical precursors that are only made available to methamphetamine cooks thanks to corruption within China’s pharmaceutical industry (South China Morning Post, February 22, 2015). Along with Yunnan and Guangdong, China’s third major drug center is Fujian, where for instance, last year Fujian police seized one metric ton of narcotics in a single raid (Sina, October 19, 2015). As one author bluntly wrote on the popular message board site Tianya Club, “Fujian is a hotbed of drug corruption” (Tianya Club, July 2, 2006).

Another problem is inefficiency. The sledgehammer is inferior to the scalpel, yet particular aspects of Chinese bureaucracy prevent the NNCC from operating with anything like surgical precision. Principally, its lack of transparency perpetually hinders international collaboration. For instance, bilateral cooperation with U.S. drug enforcement officials remains hamstrung by China’s restrictions on intelligence sharing, even concerning arrests made possible by U.S.-developed leads. Chinese policy also requires that all communication be routed through Beijing, a far less efficient process than direct communication with Chinese agents on the ground (U.S. State Department, March 1, 2010; U.S. State Department, 2015). Beijing must decide whether it wishes to keep a grip on weiwen (socio-political stability) by continuing to hold its cards close to its chest or to instead prioritize victories against the illegal drug market, which is eroding that status quo.

David Volodzko is the national editor for the JoongAng Daily, a writer for The Diplomat, where he covers matters related to Chinese politics and society, and a former university lecturer. 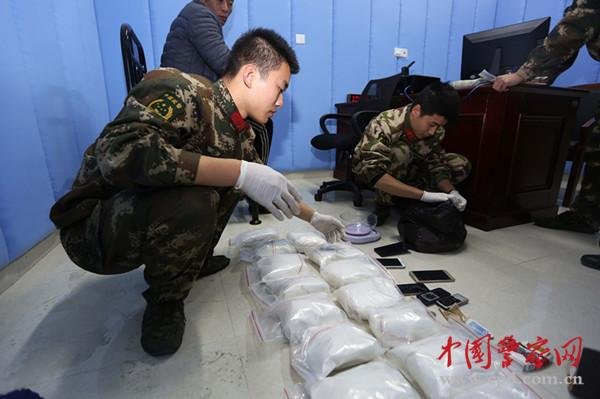 Back
Understanding China’s Response to Nort..Next
The Chinese People’s Armed Police in a..

The Jamestown Foundation is pleased to present the hybrid in-person... END_OF_DOCUMENT_TOKEN_TO_BE_REPLACED

On November 17, Jamestown Foundation Senior Fellow Olevs Nikers was interviewed by Romania-based outlet Veridica regarding, among other topics, the best possible outcome for the... END_OF_DOCUMENT_TOKEN_TO_BE_REPLACED

The February 2019 Issue of Militant Leadership Monitor features a brief on the elimination of a top al-Qaeda financier and strategist in the Sahara/Sahel, Yahya Abu al-Hammam; an exclusive analysis of the Ughyur insurgent commander haunting China in Afghanistan, Haji Furqan; an in-depth look into JeM leader and the... END_OF_DOCUMENT_TOKEN_TO_BE_REPLACED