The Council of Defense Ministers of CIS member countries met in a depleted format on June 24 in Dushanbe, with Russia’s Defense Minister Sergei Ivanov in the chair. The host, Tajikistan’s President Imomali Rakhmonov, noted the “negative impact of disintegration processes” — a reversal of the ubiquitous Russian cliché “integratsionnyie protsessy.” Georgia, Moldova, and (as usual) Turkmenistan were absent; Ukraine had announced in advance that it would downgrade its attendance to that of an observer; and there was no clear word regarding Uzbekistan’s attendance.

Rakhmonov aired an unprecedented proposal for creation of rapid-deployment forces of the Shanghai Cooperation Organization (SCO) for Central Asia, in parallel with the existing rapid-deployment structure of the CIS Collective Security Treaty Organization (CSTO). As the SCO includes China and Uzbekistan, which are not CSTO members, Rakhmonov’s proposal may be read either as a veiled attempt at balancing the CSTO, or as an implicit acknowledgment of the CSTO’s ineffectiveness. The Dushanbe meeting also discussed inconclusively the issue of drug trafficking from Afghanistan, which Ivanov and Rakhmonov termed the main security challenge to neighboring countries. All these issues are, in any case, beyond the competence of the CIS as such and its Defense Ministers’ Council.

The meeting was only able to review the operation of the CIS Joint Air Defense System in 2004 and a framework plan for 2006-10. In fact, the Dushanbe session — like the CSTO’s summit in Moscow on June 24 — highlighted Russia’s shift of emphasis from the CIS nonintegrated air defense system to an integrated one to be developed within the CSTO (see below).

The meeting approved a six-month extension of the powers of Russia’s Maj.-General Sergei Chaban as commander of the “CIS peacekeeping force in the Georgian-Abkhaz conflict zone.” Such extension is granted routinely to Russian-appointed holders of that post at six-month intervals by the CIS Defense Ministers’ forum. In this case, the decision demonstrated even more starkly than usual the disregard for international law and internal due process in CIS bodies. The meeting confirmed Chaban in Georgia’s absence. With Chaban first appointed in March, the extension was not due for routine consideration until September; but, apparently, Moscow is not certain whether another CIS defense ministers’ meeting can be held (or held smoothly) by that time. The fictitious CIS label covers a purely Russian force. The CIS has no legal authority to grant peacekeeping mandates; even Moscow no longer claims such authority on behalf of the CIS, but rather for the CSTO.

In the meeting’s aftermath, Russia’s Air Force Commander in Chief, General Vladimir Mikhailov, threatened to “smash terrorist bands beyond Russia’s territory.” Specifically, Mikhailov accused Georgia of harboring “bandits in that [Pankisi] valley, who can move as they please.” He dismissed Georgian concerns about violations of its airspace by Russian planes with a guffaw: “Fear has big eyes, and Georgians think that we are flying over Tbilisi.” This latter remark seemed to gloat over Georgia’s unrequited wish to procure modern airspace surveillance equipment (Itar-Tass, June 27). Earlier this month, Russia’s Federal Security Service anti-terrorism directorate chief, Yuri Sapunov, similarly accused Georgia and also Azerbaijan of allowing their territories to be used by “international terrorism.”

Mikhailov supervises an ongoing CIS air defense exercise, Combat Commonwealth 2005, the first phase of which began on June 24 and is scheduled to culminate on July 10. The exercise includes detection and firing practice at the Telemba range in Russia’s Chita oblast, as well as rehearsing coordinated actions of air defense units of Kaliningrad-based Russian forces with those of Belarus. The second stage and third stages, from July through September, will take place in Kazakhstan and at Russia’s Ashuluk training range in Astrakhan region. Although billed in keeping with tradition as a CIS exercise, Combat Commonwealth 2005 in fact involves only CSTO member countries. This reflects Russia’s just-announced decision to fall back on the “core” group CSTO while bypassing or discarding CIS military structures, due to the political fragmentation of the CIS.

Russia hopes to persuade NATO to deal with individual CSTO member countries via Moscow, rather than directly. However, most CSTO member countries will not willingly accept such a limitation. Armenia does not. And, on June 24, Kazakhstan submitted the presentation document of its Individual Partnership Action Plan (IPAP) to a meeting of the North Atlantic Council in the NATO + Kazakhstan format in Brussels. 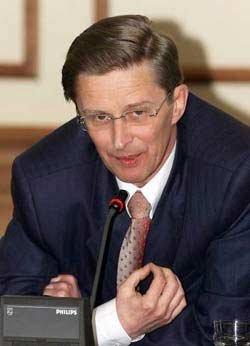