Nadezhda Savchenko, a Ukrainian air force helicopter pilot, was captured by Moscow-backed separatist forces during fighting in the Donbas region of eastern Ukraine, in the summer of 2014, and ended up in a Russian jail. Savchenko was serving in Donbas as a volunteer soldier with a local volunteer infantry battalion, “Aydar,” while on leave from her unit. Savchenko was accused by Russian prosecutors of complicity in the death of two Russian journalists of the state-owned Rossiya TV channel, who were imbedded with armed separatists. The two were allegedly killed in a Ukrainian artillery barrage. Savchenko was given a jury trial, and last March a Russian judge sentenced her to 22 years in prison. While Savchenko was in Russian custody, two Russian Spetsnaz (special forces) soldiers—Sergeant Alexander Alexandrov and Captain Yevgeny Yerofeyev—were wounded and captured by the Ukrainian military in a skirmish north of Luhansk, near the town of Schastye, in May 2015. The Russian defense ministry claimed that the captured Spetsnaz soldiers were fighting in Ukraine as volunteers, after resigning from active service. Last April, a Ukrainian court sentenced Alexandrov and Yerofeyev to 14 years in prison on charges of terrorism and “fighting an aggressive war against Ukraine” (TASS, May 25). The stage was, thus, set for a high-profile prisoner exchange.

About a month ago, President Vladimir Putin and his Ukrainian counterpart, Petro Poroshenko, reportedly agreed in principle to swap Savchenko for Alexandrov and Yerofeyev. According to officials, it took a month of detailed negotiations to agree and fulfill the elaborate logistical and legal procedures to make the exchange possible. In the end, both presidents simultaneously pardoned Savchenko, Alexandrov and Yerofeyev. The actual exchange had to be postponed until all three detainees and their lawyers completed legal proceedings and waived their appeals as a prerequisite to an executive pardon, in accordance with Russian and Ukrainian legal practice. On May 25, Poroshenko sent his presidential jet to pick up Savchenko at an airfield in Rostov-on-Don to fly her to Kyiv; simultaneously, Alexandrov and Yerofeyev were picked up by a Russian transport jet at an airfield near Kyiv and flown to Moscow (Interfax, May 25).

Savchenko, who during her captivity and high-profile trial became a symbol of Ukrainian national resistance against Russian encroachment, received a euphoric welcome in Kyiv and was greeted by hundreds of reporters. Savchenko met with Poroshenko, who awarded her the medal of Hero of Ukraine (Podrobnosti.ua, May 25). Savchenko is, today, a Ukrainian super-celebrity. She is a deputy in the Supreme Rada (parliament) and enjoys international recognition. In Washington and in European capitals, the freeing of Savchenko was welcomed as a step by Moscow in fulfilling its obligations under the Minsk agreements that require, among other things, the freeing of prisoners of war (POW). Hope was expressed that Moscow will move on to fulfill its obligations by freeing all Ukrainian prisoners, withdrawing all Russian servicemen from Donbas, and handing over control of the Donbas border to the Ukrainian authorities under international supervision. Savchenko is expected to attend the Parliamentary Assembly of the Council of Europe next month, in Strasburg, and possibly speak from the podium (Ba.org.ua, May 25).

The arrival of Alexandrov and Yerofeyev in Moscow was not announced in advance; there was no official welcome and no flurry of reporters—only a couple of TV crews from state channels to film their disembarking on an empty airstrip and reunion with their wives (Vesti.ru, May 25). Putin’s spokesperson, Dmitry Peskov, later told journalists he does not know of any plans to decorate Alexandrov or Yerofeyev and does not know whether they will continue their military service: “They were in Ukraine as private citizens, not as servicemen.” According to Peskov, the release of Savchenko and the prisoner exchange “will hardly seriously change the present atmosphere of East-West relations” (Rosbalt, May 26). While Ukrainian officials praised Paris, Berlin and Washington for help in freeing Savchenko, the Kremlin was quick to reject these claims and insisted the prisoner exchange was not connected to the Minsk peace process in any way. Moscow insists Savchenko was not a POW, and though Western leaders were informed of the coming exchange, the agreement was exclusively between Moscow and Kyiv (RIA Novosti, May 26).

As a living symbol of Ukrainian fortitude and resistance, Savchenko will probably become a political force at home and possibly an advocate of the Ukrainian cause internationally, going on tours and making speeches. But Alexandrov and Yerofeyev will most likely disappear into the shadows, as Spetsnaz officers tend to. They are seen by officialdom not as heroes, but more as an embarrassment—as men who were caught and forced Putin to compromise. The Russian public was force-fed the narrative by state agitprop media outlets about Savchenko the journalist killer; but now she has been set free to a hero’s welcome. A sense of bewilderment has, therefore, overcome Moscow, while the agitprop is working overtime to project the image of “Putin the merciful,” who pardoned Savchenko on humanitarian grounds after the relatives of the slain Russian journalists personally pleaded on her behalf (Vesti.ru, May 25). The Russian press is full of speculation that Alexandrov and Yerofeyev’s liberation was not the only price Ukraine had to pay for Savchenko’s release: Other Russians could perhaps be freed later, sanctions against Russia might be eased, or further concessions may be made (Ng.ru, May 26; Vz.ru, May 25).

Vice Chancellor Sigmar Gabriel—a seasoned friend of the Kremlin who also serves as Germany’s minister for economic affairs and energy as well as the chairman of the Social Democratic Party of Germany—told journalists this week (May 25) that dialogue with Russia must be resumed and sanctions phased out “because isolation does not work” (RIA Novosti, May 25). Shooting and skirmishes continue in Donbas, and Moscow does not seem ready to make any serious further concessions, using as a pretext the intransience of local Moscow-appointed separatist leaders. While Moscow said it is considering the recent proposal by Kyiv, Paris and Berlin to increase and arm the Organization for Security and Cooperation in Europe’s (OSCE) observer mission in Donbas, Peskov announced that the separatists must make the final decision. The latter did not hesitate with a rejection: “Armed monitors could become involved in fighting, creating a pretext for an invasion by NATO [North Atlantic Treaty Organization] armies” (Mk.ru, May 24). The Kremlin is, thus, playing good cop, while the separatists play the bad cop. Such a tactic could work with Russia’s friends in the West who seek any pretext to return to business as usual. 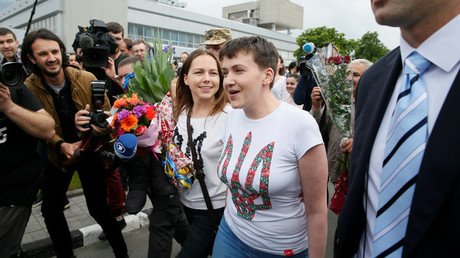 Back
Will the Opposition Gain Seats in the Be..Next
Surkov-Nuland Talks on Ukraine: A Nontra..

The Jamestown Foundation was proud to host a webinar on... END_OF_DOCUMENT_TOKEN_TO_BE_REPLACED

Jamestown Foundation Analyst Richard Arnold was interviewed by PolitiFact for a story on the Lie of the Year 2022, or Putin’s long list of lies... END_OF_DOCUMENT_TOKEN_TO_BE_REPLACED

On March 4, The Jamestown Foundation held a conference on The Iraqi Elections & the Changing Politico-Security Environment in Iraq at the Carnegie Endowment for International Peace in Washington, DC. The full-length DVD covers the entire conference proceedings, which includes the luncheon panel presented by keynote speakers: Dr. Colin... END_OF_DOCUMENT_TOKEN_TO_BE_REPLACED