On March 23–24, the Public Council of the North Caucasian Federal District held a conference in Nalchik, Kabardino-Balkaria. The primary purpose of the conference was to work out ways to prevent the spread of religion-based radicalism in the North Caucasus. Only officially approved religious leaders were represented at the conference, but the differences between them still were quite evident. Some religious figures even contradicted themselves. For example, the Russian Orthodox Archbishop of Pyatigorsk and Cherkessia, Feofilakt, first said that the way of life in the North Caucasus has always been open to inter-ethnic and inter-faith dialogue. The Russian Orthodox cleric then asserted that globalization was posing dangers to the culture and traditions of the region’s small ethnic group and that certain unnamed foreign forces were using globalization in their own interests (Skfo.gov.ru, March 23). It was unclear how the inherent openness of North Caucasians to other cultures was incompatible with globalization.

The North Caucasus is one of the most ethnically diverse areas in the world and, thus, locals have been exposed to cultural diversity for a long time. The leaders of the Russian Orthodox Church, however, advance a view that is strikingly similar to the position of the Russian state. Moscow traditionally views foreign influences on its periphery as a threat. And Moscow is especially concerned about the Muslim-majority regions in the North Caucasus, which have increasingly become culturally distinct from the rest of Russia.

One particular point of contention among the conference participants was the government’s involvement in religious affairs. The dean of the Department of Eastern Languages and Cultures at Pyatigorsk State Linguistic Institute, Ibragim Ibragimov asked: “Why do young people in Russia choose the path of radicalism even though religion is given a lot of attention, the state helps religious groups, freedom of conscience is implemented? Why do young people end up fighting in the war-torn Middle Eastern countries? Many of our brothers and sisters are fighting in the ranks of terrorists and die there. But what for? Maybe because of their false understanding of religion? I do not want to discuss the sincerity of their intentions, because only the Almighty knows about them. But such a problem exists.” A civil activist from Ingushetia, Movlad-Girey Dzagiev, however, retorted that the core problem is precisely the government’s attempts to control religion. “There are more than 100 tariqas [orders] in Islam, and new teachings also appear. But who is the judge of those developments? The existing religious structures, which are completely fused with the government, judge them. In my opinion, such a merger of the religious and secular authorities is completely unacceptable. Such coalescence undermines the moral foundations of society. Religion must act on its own. Instead, the authorities feed and tame religious movements—and, accordingly, the religious authorities do not criticize any of the government’s actions” (Kavkazskaya Politika, March 27).

Some experts have pointed to the government’s support for some religious teachings and its suppression of all others as the cause of destabilization in the North Caucasus. The majority of Muslims in the North Caucasus have traditionally been the adherents of Sufism. The Salafist school of Islam, however, has become increasingly popular among the locals. Part of the reason for the change is that the Sufi religious leaders are often so well connected to the authorities that ordinary Muslims equate them with the government. The Salafists have much less in common with government officials, and thus, many Muslims have started to regard Salafism as morally superior and non-corrupt.

Experts often miss yet another side of the issue: why do Muslims who are disappointed with Sufism switch to Salafism, instead of becoming more secular? While some cases of secularization probably happen from time to time, the rise of Salafism and its increasing political importance indicate that the most active parts of the Muslim community often end up in the Salafist camp. Apparently, secularization is a less attractive option for disappointed Sufi Muslims than Salafism. The reason for this phenomenon may be connected to politics. Secular institutions are in crisis and do not provide adequate avenues for channeling the social and political grievances of disenfranchised young people. Indirect evidence of this is the fact that many of the radical Salafists are, in fact, well-educated and politically active people.

Instead of political liberalization, however, Russian activists propose moving in the direction of greater government control over religion. Russian nationalists like Valery Korovin, an activist with the Eurasian Movement and scholar of “conservative research” at Moscow State University, said that the registration of religious groups in Russia is too liberal and should become stricter. Stricter registration laws, according to Korovin, would allow the state to weed out the “wrong” religious organizations (Kavkazskaya Politika, March 27). 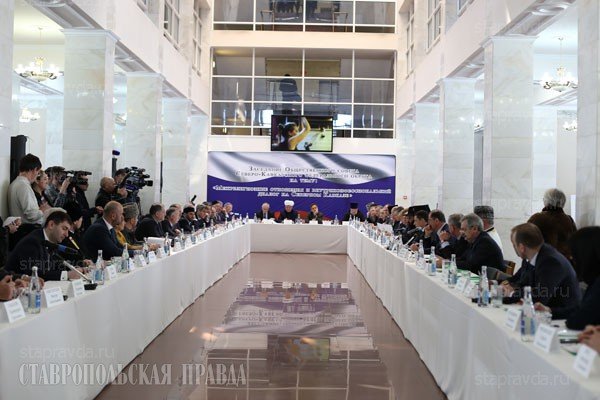 Back
Azerbaijan’s War of Attrition: A New S..Next
Social Protests in Russia Repeatedly For..

On August 4, the Jamestown Foundation held a webinar  on... END_OF_DOCUMENT_TOKEN_TO_BE_REPLACED

Jamestown Senior Fellow Margarita Assenova was featured in an event with the New Lines Institute for Strategy and Policy on Capitol Hill. The event was... END_OF_DOCUMENT_TOKEN_TO_BE_REPLACED

S. Enders Wimbush and Elizabeth M. Portale, editors Foreword by Paul A. Goble Russia is in precipitous decline, which is unlikely to be reversed. Based on the research of Russian and American experts, this conclusion constitutes the bottom line of this short volume and research project of the same... END_OF_DOCUMENT_TOKEN_TO_BE_REPLACED