While Russia’s economic woes are usually blamed on a combination of Western sanctions and falling global oil prices, it is worth remembering that some of the country’s economic wounds are self-inflicted. For example, on March 28, Russian agricultural workers planned to stage a protest (stylized as a “march”) from Labinsk (Krasnodar territory—krai) to Moscow. The farmers came from nine villages and hamlets in the Krasnodar territory, including Labinsk, Tblisi, Kalinin, and Novopokrovskiy Kuban. The protestors were mostly concerned about the neutrality of so-called “pocket courts” and the unfair distribution of agricultural land. According to the farmers, “raiders” use legal ambiguity to capture the land of local farmers and shareholders. The situation is so bad, apparently, that some have compared the position of the farmers in Krasnodar to that of the serfs in pre-1861 Russia (Novaya Gazeta, March 26). Indeed, undermining the notion of the Russian Federation as a single legal space, farmers from the village of Geymanosky Tblisi had won a legal case before the Russian Supreme Court, but are still waiting for the return of their agricultural lands: the raiders have simply ignored its verdict.

While the protest might be thought of as a purely localized issue, one of the march organizers told journalists that it was impossible for the problem to be addressed at the regional level given the current architecture of the regional administration: “It all started with [former Krasnodar governor Alexander] Tkachev, the current minister of agriculture of Russia… [He] built a powerful system, which currently cannot restrain the local administration and the new governor of the [Krasnodar] region.” The farmers’ march organizer continued, “Agricultural holdings do what they want: the land is [taken away from] individual peasant farms. The shareholders, put pressure on the farmers without regard for their struggles. Each district has its own prince, and court supervisors dance to his tune. Not in Kushchevskaya of course, not after the massacre [a reference to the 2010 mass murder of 12 people, including 4 children, by local thugs (RIA Novosti, November 19, 2010)], but who knows what will happen next.” The leader of the rally had prepared about 100 tractors and 3,000 people to participate in the march as well as disseminated press releases to ensure maximum coverage (Novaya Gazeta, March 26).

Just as it is worth remembering that some of Russia’s economic problems are of its own making, the government’s responses designed to deal with those problems are also often insufficient or self-defeating. Notably, the farmers’ rally ended before it could begin; when Moscow learned of the protesters’ intent and their demands, it sent a representative of the All-Russia People’s Front (ONF), Natalia Kostenko, to negotiate with them. The ONF is a pro-Kremlin umbrella coalition of non-governmental organizations, political parties, business associations, labor unions and civil society groupings, started by then–prime minister Vladimir Putin, in 2011, to support his presidential reelection campaign (see EDM, June 2, 2011; October 20, 2011). Claiming that “Moscow came to you,” Kostenko sat for three hours with the farmers and promised to establish a working commission to investigate the situation in the region (Novaya Gazeta, March 29). Burying investigations in a committee that promises to take action but rarely ends up doing so is a classic move of bureaucracies, which hope a problem goes away on its own and does not reappear. Still, the Krasnodar farmers’ case is interesting for what it says about the future of protest in Russia and the forms such protests may take.

In early January 2016, Russia’s Center for Economic and Political Reform (CEPR) warned that protests in the coming year will be much harder for the authorities to handle than those that took place in 2011. Protests in 2011 featured mainly members of the so-called “creative classes” (young, educated, metropolitan, middle class entrepreneurs, professionals, etc.) from Moscow and St. Petersburg, with some limited public support. VtSIOM opinion polling from that time showed that 10 percent of the Russian population surveyed declared themselves ready to protest, and 38 percent passively supported the fundamentally political goals of the protesters. The CEPR went on to state that in 2016, a year with scheduled Duma elections, the situation has changed and the goals of Russia’s protesters are now mainly economic (Gazeta.ru, January 8). As if to confirm this, the largest domestic protest of recent times was the truckers’ strike, whose members were demonstrating against the new Platon taxation system. The protest, which began on November 30, 2015, drew truck drivers from all over the country and garnered public wide support across Russia (see EDM, November 30, 2015; The Moscow Times, December 14, 2015). Whereas the Moscow authorities had previously been able to ignore the complaints and the plight of those on the periphery, now it is becoming more difficult to discount such growing domestic grievances within Russian society.

There have already been some signs of growing tensions at the regional level in the form of protest votes against the preferred candidates of the Kremlin. In the regional elections that took place in Irkutsk oblast last year, voters turned the tide in favor of the Communists, and in Amur they almost forced a second round of elections for the candidate from United Russia (Gazeta.ru, January 8). In the case of both the Krasnodar farmers and the truckers’ strike, there appears to be an important lesson about the concerns of the government and the form that will be taken by effective future demonstrations. What prompted Moscow to action in Krasnodar was the threat of the farmers marching on Moscow and making a regional issue into a national one. This concentration on the Russian capital was also the strategy of the truck drivers, who carried out one of the most effective protests in recent times. With national parliamentary elections due to be held this year, the authorities may have to secure the votes needed to win by listening to the voices of those on the periphery—or else resort to the dangers of outright falsification of the results. 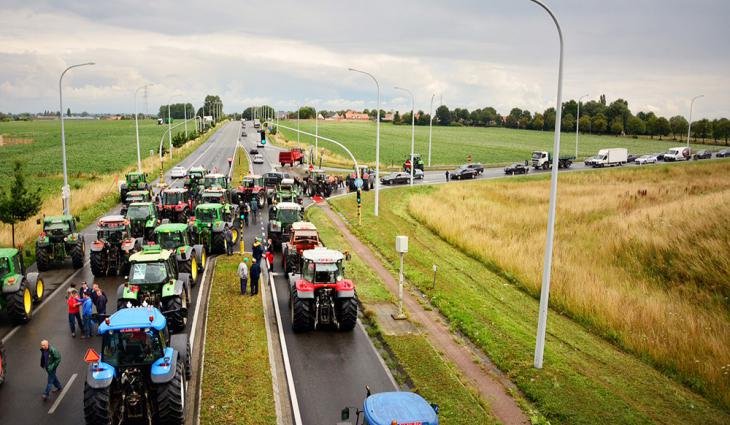