This week (April 6), without prior warning or any meaningful public debate, President Vladimir Putin announced a massive overhaul of security, public order and law enforcement in Russia by creating a special new internal army. Formed immediately by presidential order (ukaz), the new “National Guard” will be based on the existing Interior Ministry Troops—a 200,000 strong armed force with mechanized motor-rifle brigades and divisions, special troops and an air force, previously subordinated to the interior ministry, which is in charge of Russia’s police forces. The National Guard will include not only the Interior Troops that are mostly manned by conscript soldiers, but also special paramilitary police units known as OMON and SOBR as well as the interdepartmental government security guard service (Vnevedomstvenaya Okhrana). These units of contract servicemen number some 200,000 and will, thus, boost the National Guard to around 400,000 (Interfax, April 6).

The creation of the National Guard requires major changes to existing legislation. The Kremlin has introduced a package of bills to the Duma to make the National Guard a legal entity with sweeping powers to arrest, interrogate and use of deadly weapons against Russian civilian suspects or “troublemakers.” Putin expressed full confidence the Duma would approve the National Guard legislative package without any delay “so there could be no possible misunderstandings”; but the overhaul is going ahead before the legislators have time to even consider the changes. By separate ukaz, Putin appointed Army General Viktor Zolotov (62) as the commander-in-chief of the National Guard. Zolotov will be subordinated solely and directly to the president and have the administrative rank of a cabinet member (Interfax, April 6).

Zolotov is Putin’s long-time close associate from St. Petersburg and the president’s chief bodyguard and sparring partner in boxing and judo. Born in St. Petersburg, Zolotov served in the KGB bodyguard 9th Main Directorate. From 2000, when Putin became president, until 2013, Zolotov was the chief of the presidential security service. In May 2012, Zolotov was appointed a permanent member of Russia’s Security Council. In 2013, Zolotov, who did not have any police or military service background, was appointed deputy commander of the Interior Troops. In May 2014, Zolotov became commander of the Interior Troops. Plans to create a National Guard in Russia, based on the Interior Troops, have reportedly circulated in the Kremlin in previous years. Zolotov—a professional bodyguard, whom Putin apparently considers absolutely loyal—was clearly being groomed to become the commander of the new joint security force (Kommersant, April 5).

In an apparent move to compensate the interior ministry, Putin announced that the antinarcotics service—the Federal Drug Control Service (FSKN)—and the Federal Migration Service (FMS), which controls foreigners on Russian territory, will be merged with the Ministry of Interior. Bribes from illegal immigrants and narcotraders make the FSKN and FMS prime illegal moneymakers within Russian law enforcement. Both the FSKN and FMS will be transformed into directorates within the interior ministry; their present staff will be cut and rotated. Russia’s entire police force is being rebooted, and officers will be reinstated into new structures (Kommersant, April 5). In Russia, obtaining a good moneymaking position traditionally requires paying a substantial bribe, in advance, to the decision-making superiors.

Putin has declared the National Guard’s prime task to be fighting terrorists and organized crime, but the force seems too big and too heavily armed with new tanks and other heavy weapons for such a mission. The Federal Security Service (FSB), the Investigative Committee and the Ministry of Interior will continue to work organized crime and terrorist threats, and it is not clear how the National Guard could be the leading antiterrorist or anticrime force. In Soviet times, the Interior Ministry Troops were a heavily armed internal force created to deal with domestic enemies—the people of Russia primarily, whom the Communists always considered an inherent threat. Today, Putin apparently believes the internal threat to his regime is rising rapidly, although all opinion polls continue to put Putin’s approval ratings at record highs. Of course, the Russian economy is in the doldrums, mass poverty is on the rise, and social unrest is possible in the future. But the consensus opinion of social scientists and pollsters is that at least two to three more calm years can be expected ahead (Ng.ru, April 6).

When rigged Duma elections triggered mass antigovernment demonstrations in Moscow at the end of 2011 and in spring 2012, the interior ministry did not initially demonstrate great efficiency and struggled to muster enough trained manpower to effectively control the streets of Moscow. In 2012 the number of specialized anti-riot OMON police in all of Russia was estimated at some 25,000, the number stationed permanently in Moscow—only some 2,000. The Internal Troops units used as backup in Moscow in spring 2012 were inept conscripts, with less than a year of service under their belts. The precinct Moscow police, on the other hand, are corrupt; their morale is low and their riot training—zero. The Moscow OMON was boosted to 6,000 by other OMON units flown in from all over Russia. This left Russian provincial cities exposed if protests spread. The different OMONs from various regions are closely connected to local authorities; they have never trained together and do not know other cities (Novaya Gazeta, March 2, 2012).

Putin’s sudden decision to create a joint massive praetorian National Guard by merging together all the OMON units and the Interior Troops may have been triggered by the publication of the so-called “Panama Papers,” which disclosed corrupt offshore financial schemes that involved, among others, some of Putin’s closest acquaintances. The Kremlin has accused the US State Department and the Central Intelligence Agency (CIA) of being instrumental in their publication—allegedly aimed at Putin (Interfax, April 4). According to Putin himself, the release of the Panama Papers is an attempt to weaken Russia from the inside, to “split society and undermine trust in the government.” Putin added: “They will pit us one against another, like it was done during the tragic time of World War I” (Interfax, April 7). Apparently Putin is referring to the Bolshevik revolution led by Vladimir Lenin, which was partially financed by the German General Staff. It seems, Putin considers himself as some besieged emperor in the Kremlin, while a US-led and financed revolutionary regime change has been commenced, with the Panama Papers as a declaration of war. A massive praetorian National Guard, headed by an absolutely loyal bodyguard, is seen as the only means to stop the onslaught. 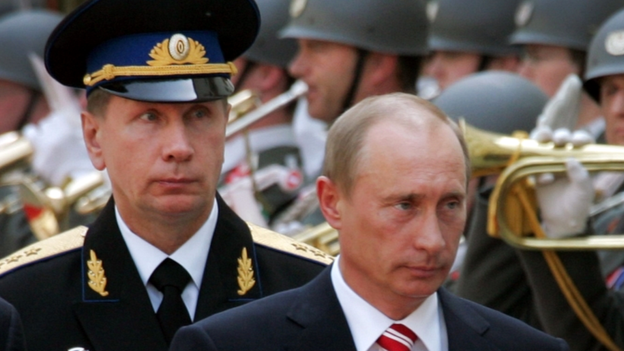 The Jamestown Foundation was proud to host a webinar on... END_OF_DOCUMENT_TOKEN_TO_BE_REPLACED

Jamestown Foundation Analyst Richard Arnold was interviewed by PolitiFact for a story on the Lie of the Year 2022, or Putin’s long list of lies... END_OF_DOCUMENT_TOKEN_TO_BE_REPLACED

The March 2022 issue of Militant Leadership Monitor features a piece on Abraham Amuta, a Christian turned bodyguard of Boko Haram. It also features a short look into the lone wolf attack claimed by IS that rocked Israel on March 27, 2022. Following these briefs, the issue looks into... END_OF_DOCUMENT_TOKEN_TO_BE_REPLACED