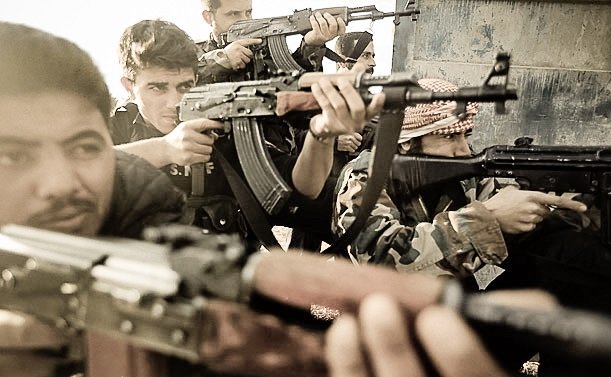 In this Quarterly Special Report (QSR), we focus on the foreign fighters who have flocked to the Syrian conflict from around the world. From the Caucasus to the Black Sea to Indonesia, the Syrianconflict has attracted militants from various corners of the globe to fight against Bashar al-Assad’sregime. The QSR begins with a brief survey of foreign fighters in Syria by Nicholas Heras. Theprofiles of foreign fighters start with a portrait of the Georgia-born Chechen Omar al-Shishani, ofthe Islamic State, written by Sirwan Kajjo. Jacob Zenn then explores the little known connectionbetween militants in Indonesia and Syria. The QSR continues with an updated profile of Abu Bakral-Baghdadi, the leader of the Islamic State, formerly the Islamic State of Iraq and Syria. The al-Qaeda affiliate in Syria, Jabhat al-Nusra, and its Jordanian ideologue Sami al-Aridi is profiled byMurad Batal al-Shishani. Mairbek Vatchagaev provides a unique look at the Crimean fighter Abdul-Karim Krymsky. Murad Batal al-Shishani then offers an overview of Syrian rebels originally fromthe Russian North Caucasus. Nicholas Heras covers a Lebanese al-Qaeda commander, OsamaAmin al-Shihabi. Leyla Aslanova then provides an independent assessment about the emergence ofAzerbaijani fighters in Syria as reflected in a new documentary film. Finally, a timeline of milestones in the Syrian civil war is provided for context.

This issue of Militant Leadership Monitor includes profiles of Pakistan's Most Wanted Adnan Rasheed, Laskhar-e-Jhangvi founder Malik Muhammad Ishaq, Lashkar-e-Taiba's Abdul Rahman Makki, and al-Shabaab's Abu Mansoor al-Amriki.
$20.00 – $25.00 Select options
The November Issue of Militant Leadership Monitor features two briefs by Nicholas A. Heras. The first focuses on the recent announcement of the formation of al-Jabhat al-Islamiya (Islamic Front), a coalition of seven powerful opposition groups in Syria, with a look at one of its... MORE
$20.00 – $25.00 Select options
The September Issue of Militant Leadership Monitor focuses on militant leaders in Africa and the Middle East. In the first brief, Nicholas A. Heras analyzes an Iraqi Shiite militia leader who has vowed vengeance if the United States and its Allies launch a strike on Syria. The... MORE
$20.00 – $25.00 Select options
In this Special Report “Pakistan’s Tribal Militants: Profiles from the Pashtun and Baloch Insurgencies,” we examine some of Pakistan’s tribal militant leaders in the Federally Administered Tribal Areas (FATA) and the North West Frontier Province (NWFP) as well as the tribal insurgency in Pakistan’s south,... MORE
$20.00 – $25.00 Select options

The Jamestown Foundation is proud to present a webinar on “Broken... END_OF_DOCUMENT_TOKEN_TO_BE_REPLACED

On January 9, The New York Times ran an article on a scandal involving Hong Kong government elites that featured an interview with Jamestown Senior... END_OF_DOCUMENT_TOKEN_TO_BE_REPLACED

The May 2020 issue of Militant Leadership Monitor features a brief on Mullah Yaqoob, the son of the Taliban founder who was recently promoted to the position of military chief of the Afghan militant group; an update of Tariq Saleh, Yemen’s wildcard general; a look at Sultan Aziz Azam,... END_OF_DOCUMENT_TOKEN_TO_BE_REPLACED