Events in Ingushetia this past week again forced the Russian mass media to broadcast news about daily violent incidents, making it difficult to agree with the republic’s president, Yunus-Bek Yevkurov, that the situation there is no different from the situation in other regions of the Russian Federation. It is unlikely that the same combination of frequent militant actions by the armed underground and organized crime activities can be found in other regions of the country outside the North Caucasus to the same—or even to a comparable—degree.

As the press department of the Federal Security Service (FSB) admitted last month: “The main terrorist threats on the territory of Russia remain those related to the activities of gangs and conspiratorial religious-extremist structures in the North Caucasus region, as well as the stirring up of neo-Nazi youth groups that exploit the tactic of violent extremist actions.” According to the press service of the National Anti-Terrorism Committee (NAK), 29 counter-terrorist operations were carried out in the Southern Federal District of Russia in the past year. The NAK said 243 militants, who showed armed resistance, were killed, including 23 gang leaders (http://www.rosbalt.ru/2009/03/11/624833.html). In the spirit of the Soviet era, the losses among personnel of the Interior Ministry, FSB and the Russian Defense Ministry’s Main Intelligence Directorate (GRU), as usual, are not made public. At the same time, the authorities are compelled to admit that they are dealing with the sizeable armed underground (see Yevkurov’s interview last month with Novaya Gazeta, http://www.novayagazeta.ru/data/2009/013/14.html).

While Yevkurov tried to attract the attention of journalists to the problems he is resolving by implementing various course of actions (e.g. anti-corruption initiatives, resolving the issue of blood feuds, tackling the problem of radicalism among youth, and so on), an observer might get the impression that there is no authority or power capable of fully controlling the situation in the republic. Dressing in the traditional garb of a tariqat member (meaning a member of the Sufi brotherhood or order of Kunta-Khaji), Yevkurov is striving to win the sympathies of ordinary Ingush. Equally important is the fact that he is removing from his retinue practically everyone connected with his predecessor, Murat Zyazikov. With his policy of denying the reality—the rise in criminal activities, massive corruption among state bureaucrats, and the struggle with the Ingush jamaat—Zyazikov earned the wrath of Ingush society. Yevkurov recently fired the press secretary and a number of bureaucrats from the Ingushetian presidential administration.

Most unexpected was Yevkurov’s appointment of Kaloi Akhilgov as his new press secretary. Akhilgov is better known as the lawyer of Magomed Yevloev, the former owner of the independent Internet portal who was killed on August 30, 2008 under murky circumstances by the personal security detail of then Ingushetian Interior Minister Musa Medov. Akhilgov is among those who personified the past opposition to Zyazikov (http://aksakal.info/news%2Bview%2B3419.html). He was not the first opposition member to join the establishment, given that Yevloev’s other lawyer, Musa Pliev, was earlier appointed to the position of adviser to the new republican president. The resignation of the bureaucrats from Ingushetia’s presidential administration will undoubtedly be perceived by society positively, but it is not likely to yield any real results in the policy carried out by President Yevkurov, who is increasingly focusing on the personnel issue while avoiding public statements with regard to the daily losses among the civilian population occurring in the course of the so-called counter-terrorist special operations.

President Yevkurov also replaced his representative in the Federation Council, the upper house of the Russian parliament also known as the Senate. Ingushetia’s representative in the Senate was Isa Kostoev, a former investigator who became famous during the Soviet period for solving the case involving Andrei Chikatilo, the most dangerous serial killer of the 1980s. Isa Kostoev was also one of Murat Zyazikov’s fiercest supporters, and he criticized Ruslan Aushev, Zyazikov’s predecessor. He could not have satisfied the demands of Yevkurov, who frequently recruits into his team people close to or sympathizing with Aushev, Ingushetia’s first president.

The head of presidential administration was replaced by the deputy, Yakub Patiev (http://ingushetia.org/news/18924.html), who is known better in Ingush society for his literary work than his administrative capabilities.

The Russian authorities are trying to demonstrate their willingness to assist Yevkurov financially in the implementation of his projects. Apart from the promised 29 million rubles (around $858,000), the announcement about the allocation of almost 315 million rubles (nearly $9,320,000) from the Russian federal budget was made in April (http://ingushetia.org/news/18908.html). The federal authorities, however, expect tangible achievements from Yevkurov when it comes to the struggle against the armed underground, which is represented by the Sharia Jamaat led by Emir Magas. Following a working meeting between Yevkurov and the chairman of Investigative Committee of the Prosecutor-General’s Office, Aleksandr Bastyrkin, in Nazran (http://www.yuga.ru/news/151055/), an agreement was reached to establish an interagency working group for increasing the effectiveness of the investigation of crimes and improving the interaction of law-enforcement authorities in the republic (http://www.rosbalt.ru/2009/04/04/631299.html). The composition of the interagency group includes officials from the Investigative Directorate of the Investigative Committee of Prosecutor General’s Office for Ingushetia, from the Main Investigative Directorate for the Southern Federal District and from Ingushetia’s Interior Ministry, according to Itar-Tass. Thus, the authorities are preparing to coordinate their disparate actions against the main enemy—the armed opposition. This implies that the authorities agree that their main enemy is a militant, not a corrupt official, contradicting what Yevkurov has been saying to his fellow Ingush.

The futility of operations carried out against the militants was clearly demonstrated by the statements made in the aftermath of the three-day military operation in Ingushetia’s Sunzhensky district, which includes six settlements. As a result of this operation, three hidden munitions caches were discovered, but not a single militant was found in the district from which reports of attacks on various detachments of federal forces emanate practically every week. This is why it is very unlikely that the newly-formed interagency group will be able to change anything for the benefit of President Yevkurov.

In the meantime, the chronicle of violent events in Ingushetia continues to resemble a wartime newsreel. On April 3, the house of the deputy head of the local internal affairs department came under attack in the village of Karabulak. That same day, the house of an investigator from the investigative department of the Investigative Committee of the Prosecutor General’s Office for the Sunzhensky district, Zakra Kurkiev, came under fire from small arms and grenade launchers by unknown gunmen in the village of Troitskaya. Meanwhile, a 24-year-old resident of Malgobek, Gapur Tankiev, was abducted and a 25-year-old Nazran resident, D. Sajaya, was killed.

The situation in Ingushetia remains tense and militant actions by the Sharia Jamaat are the main destabilizing factor. The Sharia Jamaat’s actions are now the chief headache for the new president, who has some experience in negotiating with militants. (In 2000, in the course of negotiations with militants, Yevkurov rescued several Russian officers from Chechen captivity.) Based on Yevkurov’s experience, many people in Ingushetia believe that he will likely try to establish contact with Emir Magas.

Moreover, the residents of the republic are convinced he already met with Magas but that they failed to agree on the most important issue (http://www.svobodanews.ru/Content/Article/1509700.html), which is the issue of who will leave Ingushetia: Emir Magas or President Yevkurov. According to the Radio Liberty correspondent Andrei Babitsky, the Chechen leadership’s policy, which is being offered as a model for Ingushetia, is unlikely to be replicated in Ingushetia to the degree that Moscow would like. Yevkurov is far from being like Kadyrov, and it is very difficult for Yevkurov to transcend his limitations. This means that any attempt to mimic Chechnya’s experience with Ingush peculiarities will simply produce a pale imitation of Kadyrov’s policy and fail to yield the results that the Kremlin is expecting from Yevkurov. 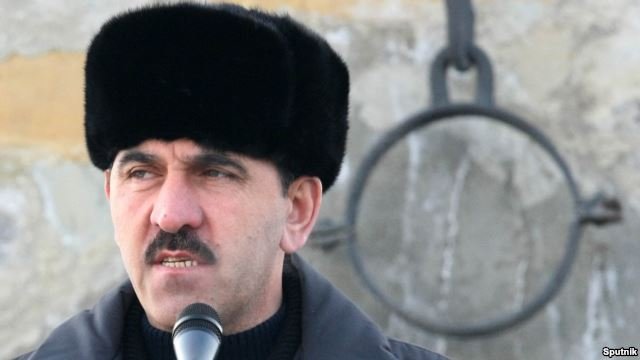 Back
Kadyrov and Co. Leap to Delimkhanov’s ..Next
Counter-Terrorist Operation in Chechnya ..

The Jamestown Foundation is proud to present a webinar on China’s... END_OF_DOCUMENT_TOKEN_TO_BE_REPLACED

On May 19, Voice of America posted an interview with Dr. Richard Arnold on the topic of Russian Cossacks’ involvement in the war against Ukraine. END_OF_DOCUMENT_TOKEN_TO_BE_REPLACED