Meeting with the staff of Komsomolskaya pravda on May 23, Russian President Vladimir Putin said, with reference to the possible closure of Russian bases in Georgia: “We must create the necessary conditions for the evacuation of our troop contingent, its accommodation on Russian territory or in some other place.” He apparently meant the possible relocation of some of those troops to Armenia. One of Russia’s conditions for closing its bases in Georgia, Putin went on to say, is transit rights for Russian forces via Georgia to Armenia (Interfax, May 23).

Four days earlier, the Chief of the General Staff of Russia’s armed forces, General Yuri Baluyevsky, told the press in Moscow that some of the heavy weaponry from Russian bases in Georgia would be redeployed with Russian forces in Armenia, if Georgia insists that Russia close those bases by 2009 (Georgia actually insists on 2008). Baluyevsky indicated that Moscow could forgo the redeployment of combat hardware to Armenia, if Georgia would agree to a 10-year term for Russian troop withdrawal. In that case, he suggested, there would be sufficient time and funding for accommodating the troops and storing the weaponry under proper conditions in Russia (Interfax, RIA-Novosti, May 19).

In a little-noted move on May 21, Armenia’s Defense Minister Serge Sarkisian met with Russia’s Minister for Territorial Development Vladimir Yakovlev in Yerevan for a session of the CIS Inter-Ministerial Commission for Cooperation in Building Activities. Yakovlev, whose ministry is in charge of construction projects, discussed with Sarkisian the resumption of unfinished construction work at the Russian military base in Gyumry, Armenia (PanArmenian News, May 21). This move seems to confirm Moscow’s intention to prepare for relocating part of its force from Georgia to Armenia, if a troop-withdrawal agreement with Georgia is signed.

Moscow’s apparent intention is disturbing to Azerbaijan. In an initial public reaction, Deputy Minister of Foreign Affairs Araz Azimov recalled previous transfers of Russian arms to Armenia, noting that yet another increase in those arsenals could fuel regional instability. “We are seriously concerned about this, and would not want Russia to do this again,” Azimov stated during a NATO seminar in Baku. A communique from Azerbaijan’s Defense Ministry, citing Baluyevsky’s remarks, “condemn[ed] such steps,” and noted that Russia would be arming a country that is at war with Azerbaijan (ANS, Turan, May 20).

On May 23, Azerbaijan’s Minister of Foreign Affairs, Elmar Mamedyarov, summoned Russia’s chargé d’affaires ad interim to hand him a verbal note that the ministry made public. Expressing serious concern over possible redeployment of Russian arsenals from bases in Georgia to Armenia, the document notes, “Such a turn of events would run counter to the interests of peace and security in the region and, moreover, increase tensions between Armenia and Azerbaijan during a complicated phase of conflict-settlement negotiations.” Azerbaijan “hopes that Russia would desist from that intention” (Turan, May 23).

Armenia’s authorities are not known to have reacted one way or another to Moscow’s declared intention. Nor have Putin, Baluyevsky, or others deemed it necessary to say that they had asked for and received Armenia’s consent to the possible redeployment. The assumption all around appears to be, first, that Russia can use Armenia’s territory for military purposes at will; and, second, that Armenia would welcome another infusion of Russian combat hardware on its territory.

Quoting Russian Duma Chairman Boris Gryzlov’s notorious characterization of Armenia as “Russia’s outpost,” a leading Yerevan liberal newspaper observes, “Russia is doing to Armenia, in this case on Armenian territory, what it likes. Nobody from the Armenian elite says anything. … Putting Armenian territory at Russia’s disposal is the price that Armenian authorities have to pay for the Kremlin’s support” (Aravot, May 20).

According to the latest issue of The Military Balance, Russia currently maintains 3,500 troops, 74 main battle tanks, 238 armored combat vehicles and personnel carriers, 84 artillery systems, and 18 Mig-29 aircraft in Armenia (International Institute for Strategic Studies, 2005.) Armenia has yielded part of its own entitlement quota of CFE Treaty-limited heavy weaponry to Russia for deployment on Armenian territory. However, verification of compliance with treaty ceilings is impossible because a large part of that weaponry is deployed inside territory seized from Azerbaijan, uncounted and out of bounds to inspection. 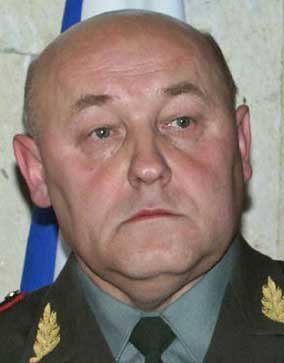