President Vladimir Putin ordered, on June 14, another of the traditional “snap inspection exercises,” which have become a hallmark of the approach to testing combat readiness in the hands of Defense Minister Sergei Shoigu. The latest snap inspection exercise, running from June 14 to 22, involves the command-and-control components of military units across the entire country, along with their supporting elements. The exercise’s main focus is on testing mobilization and reserve capabilities. At 0700, on June 14, the General Staff informed commanders in each of the four Russian military districts (MDs) to commence the exercise to evaluate “mobilization readiness” and the ability to conduct “territorial defense” involving members of the reserve. Reportedly, the snap inspection examined strategic mobility, communications, deploying mobile command posts, and exploiting access to weapons and equipment depots within the MDs (TASS, RT, June 15).

Since February 2013, Shoigu has made persistent use of snap inspections to test combat readiness and further define problem areas for defense planning staffs. In early 2016, noting the utility of these exercises, President Putin confirmed that the practice would continue. Its most recent focus was on the Southern MD, no doubt in preparation for the highlight of the combat training year—Kavkaz (Caucasus) 2016—in September (RIA Novosti, June 14).

Indeed, announcing the exercise during a conference call at the National Defense Management Center (Natsional’nyy Tsentr Upravleniya Oboronoy—NTsUO), in Moscow, Shoigu explained that the spot checks envisaged reviews of weapons storage depots and some of the military authorities. He said that in addition to the combat readiness tests in the snap inspection series, it is equally necessary to examine the mobilization component of the military, the condition of reserve units, and the storage facilities. The mobilization exercise used 64 military units and 9 higher military educational institutions; it was conducted on the territory of 30 regions of Russia (Krpress.ru, June 14). Shoigu added that the nationwide exercise assessed the operational planning staff in terms of its ability to raise groups of forces for different situations. The final stage of the exercise would consequently evaluate the force groupings’ response preparedness to deal with natural and man-made disasters. Shoigu also instructed Deputy Defense Minister Anatoly Antonov to inform foreign military attachés about the exercise and its scope (Mil.ru, June 14).

Of course, the timing of the exercise, following the North Atlantic Treaty Organization’s (NATO) largest collective military exercises since the end of the Cold War—Anaconda 2016, in Poland, and Saber Strike, in the Baltic Region—prompted speculation that the snap inspection represented Moscow’s answer. Nezavisimaya Gazeta noted that in response to the multinational flying exercise Arctic Challenge 2015, Moscow had ordered a snap inspection of air and air defense units. Some commentaries picked up the dichotomy between Russia informing counterparts about these inspections and the alleged lack of transparency in North Atlantic Alliance exercises. Moreover, one of the appealing facets of the snap inspection concept for the Russian defense ministry is that it circumvents the Organization for Security and Cooperation in Europe’s (OSCE) Vienna document on troop levels and foreign observer access. Rossiyskaya Gazeta, on the other hand, downplayed the timing of the exercise and concentrated on its mobilization theme. Far from constituting a “response to NATO,” instead the exercise appeared crafted to assess a number of inter-linked internal organizational issues in the military and beyond: especially, the interaction between commands and units with local authorities, the speed of troops and mobile command-and-control deployments, and rehearsals of the timescales for the Armed Forces’ involvement in the aftermath of disasters (Newsru.com, June 15).

Colonel (retired) Viktor Murakhovsky, the editor of Arsenal Otechestva, argued that the avoidance of foreign observers during snap inspections, particularly in its latest version, is associated with the extreme secrecy of “mobilization measures.” In any case, as the Director of the Institute of Political and Military Analysis Aleksandr Khramchikhin noted, it remains necessary to train and test the Armed Forces (RBK, June 15). This sentiment was echoed by the head of the Duma Committee on Defense and former Black Sea Fleet commander, Admiral Vladimir Komoyedov, who contended that the snap inspection of mobilization readiness has nothing to do with answering NATO’s exercises. “We have our own plans, and we are acting in accordance with them. We need to keep our powder dry,” he explained (Polit.ru, June 14).

Indeed, as a response to recent North Atlantic Alliance military drills, the Russian mobilization snap inspection hardly seems convincing. Vedomosti security correspondent Aleksey Nikolskiy cut a swathe through such speculation. Nikolskiy observed that the inspection assessed the performance of existing regulations on mobilization issues, interaction with local authorities, deployment of mobile field command posts, and the ability to conduct territorial defense aided by mobilizing individual military administrative agencies. Nikolskiy concluded that the snap inspection had nothing to do with responding to NATO or sending signals to the Alliance (Vedomosti, June 15).

Moreover, citing Murakhovsky, this snap inspection was characterized as the largest test for the mobilization system since the strategic exercise Vostok (East) 2010, which was aimed at assessing the entire reformed mobilization system and stressing reservists. This used the newly formed territorial defense commands and an organized 5,000-reserve element. The comparatively small numbers in this reserve suggest no preparation for “big war,” but simply contingency planning in each MD for various scenarios that could usefully utilize reservists. Murakhovsky believes the exercises analyzed the interaction of more than 20 military and civilian structures and how these interface with the NTsUO and link to the newly formed National Guard (Vedomosti, June 15).

A tendency exists among the Western analytical community, and is ardently replicated in media circles, to characterize almost anything or everything the Russian military does as in some way linked to “responding” to NATO or sending a “signal” to the Alliance. Of course, such hyperbole underestimates what Admiral Komoyedov and others highlight: simply that the Armed Forces need to be trained and exercised. Additionally, as a Eurasian state, not everything that the Russian military undertakes should be interpreted through a narrow Western-centric prism. What the latest snap inspection does inadvertently convey is that despite the promises of the “New Look” reform, there is increased attention to some form of local mobilization drive and efforts to enliven the reservist system. To activate and retain viable reservists will demand constant investment, training and support. And achieving this while trying to integrate other elements of territorial defense is evidently an ongoing complex task for Russian planners. 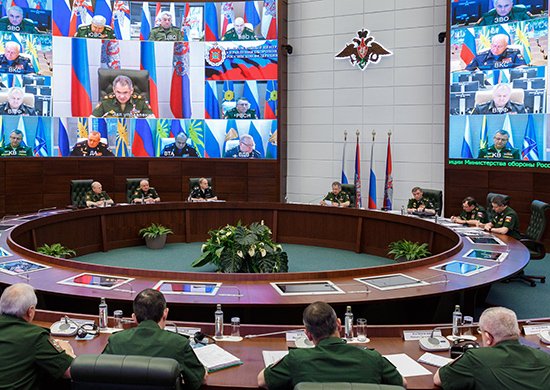 Back
Dispute Over Armenian Historical Figure ..Next
Tallinn–Helsinki Railroad Tunnel Could..

The Jamestown Foundation is pleased to present the hybrid in-person... END_OF_DOCUMENT_TOKEN_TO_BE_REPLACED

On November 17, Jamestown Foundation Senior Fellow Olevs Nikers was interviewed by Romania-based outlet Veridica regarding, among other topics, the best possible outcome for the... END_OF_DOCUMENT_TOKEN_TO_BE_REPLACED

This issue of Militant Leadership Monitor includes in-depth analyses of Ansaru’s Khalid al-Barnawi, the Niger Delta’s al-Haji Mujahid Dokubu-Asari, succession scenarios after Talabani, and the second part of a who’s who in the Jordanian Opposition. END_OF_DOCUMENT_TOKEN_TO_BE_REPLACED