A recent police operation against militants in the Dagestani city of Derbent was so bloody that even the Islamic State (IS) mentioned it. The clash started as police were checking out several homes after receiving a tip concerning the whereabouts of Bairamali Abasov, the leader of a local militant cell, who was suspected of several crimes (Ntv.ru, May 14). As the police were checking out the residents in one apartment, someone threw a hand grenade and shot at them from the fifth floor. The head of the Derbent city police, another senior police officer and three subordinates were injured in the attack. As the police retreated, they somehow left behind the wounded head of the police’s criminal investigation department, Musa Musaev. Later, however, the description of events somewhat changed, and, according to the new version of events, “a group of militants attacked the police on Krepostnaya Street in Derbent. The assailants threw a hand grenade at the officers and then started shooting at them. Then, the militants retreated with one hostage to a building that the police soon started to storm” (Regnum, May 15).

It remains unclear why police decided that Musa Musaev had been taken hostage. While the militants may have dragged him inside the building to use him as a shield, no information has been provided suggesting that the militants actually used Musaev as a hostage. The police, however, for some reason decided in the afternoon that their colleague was dead, and that they could storm the building (Interfax, May 14). It is also not clear how they learned about Musaev’s death (Newsru.com, May 14).

A second officer was killed in the incident—Viktor Timofeyev, a member of the special forces. And 17 other police officers were wounded. Four militants were reportedly killed, but, as of May 15, it was still unclear exactly how many rebels died in the incident. The police often regard even the wives of rebels as fighters, if they fail to leave besieged buildings. Therefore, the figures provided by the police about the number of rebels involved in the incident should be taken with a degree of skepticism.

Within hours of the incident, the leadership of Islamic State claimed responsibility for the operation in Dagestan and declared it to be a success. The IS group claimed three police officers died in the attack but did not mention its own losses (Regnum, May 15). It is astounding how quickly the IS was able to obtain information from southern Dagestan and claim responsibility for the activities of militants there. The clash in Derbent was the third attack since the start of the year claimed by the group. At least six people, most of them police officers, died in those attacks (Kavkazsky Uzel, May 15). The IS, however, did not comment on the attack by two suicide bombers in Grozny on May 9. Therefore, one can surmise that the only channel of communication the Islamic State has with North Caucasian insurgents is in southern Dagestan. The militants in Iraq and Syria would like to have closer ties to the militants in the North Caucasus as well. Yet, the IS’s expansion to the North Caucasus has so far had only one significant consequence—it has helped lead to the decline and virtual disappearance of the Caucasus Emirate from the militant arena in Dagestan. However strange it may sound, the Islamic State has helped Russia to rid itself of the Caucasus Emirate; but the IS has not yet replaced the Caucasus Emirate as a serious alternative rebel movement.

Recent police losses in Derbent were nearly half of the total number of police officers killed there during all of 2015. Casualties in the incident were likely heavy because the police decided to take on the insurgents on their own, without asking the Federal Security Service (FSB) for assistance. Local police must have told the FSB that the suspects were ordinary criminals, not militants, in order to avoid the involvement of the Russian security services. The head of the Russian Investigative Committee, Aleksandr Bastrykin, held a meeting in Makhachkala one day before the clashes in Derbent. He was visiting Dagestan following the murder of the father of an Investigative Committee officer on May 9. One of the sons of the murdered man, an Investigative Committee officer, had himself been killed earlier. Another son of the slain man works in the general prosecutor’s office (Onkavkaz.com, May 13). The police were apparently trying to solve the crime as quickly as possible and, as a result, clashed with the rebels and suffered significant losses.

The recent clash between the police and insurgents in Derbent was one of the largest in Dagestan in recent years, and the Islamic State claimed responsibility for it. The attack showed that the insurgents could strike in Russia anywhere and at any time. 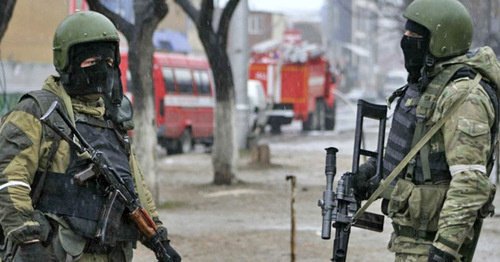