In late September, Russia’s Deputy Prime Minister Dmitry Rogozin, who oversees the defense industry, promised that the ongoing military modernization will contain a “nuclear surprise” for the country’s potential adversaries. It seems that in large measure this “surprise” relates to a major readjustment to the target for the upgrade and modernization of Moscow’s nuclear arsenal: from a target of 70 percent by 2020 to 100 percent. Rogozin’s statement aroused critical comment even from Russian defense experts, who questioned the capacity within the defense industry to deliver on such targets within the next six years (Nezavisimoye Voyennoye Obozreniye, September 26).

Rogozin’s remarks, however, find support in earlier statements from the top brass as well as during President Vladimir Putin’s address to Duma representatives in Yalta in August 2014. Indeed, Deputy Defense Minister Yury Borisov suggested in June that such modernization targets are within reach for the Strategic Rocket Forces (Raketnye Voyska Strategicheskogo Naznacheniya—RVSN). The level of confidence expressed by the political-military leadership in nuclear modernization may not be entirely realistic, given existing problems in modernizing other parts of the nuclear triad, yet it also suggests some shift in emphasis to favor a new heavy liquid rocket development. The development of the heavy liquid rocket was entrusted to the Makeev State Rocket Center, which has not received the same level of investment as the Moscow Institute of Thermal Technology associated with strategic nuclear systems including Poplar, Topol-M and Yars (Nezavisimoye Voyennoye Obozreniye, September 26).

There are clear signs of technical developments and increased confidence within the RVSN. Its leadership always anticipated benefiting from military modernization, and some signs of the areas in which this is impacting are becoming apparent during RVSN exercises. A recent RVSN exercise in Central Military District (MD), for example, provided indications of these advances as well as areas to which attention is devoted for testing and improvement. These military drills featured raising forces to the highest degree of combat readiness as well as conducting maneuvers on road routes, including patrols, anti-sabotage units, the assessment of the impact of enemy precision weapons, and using radio-electronic warfare in deployment areas. Mobile strategic missile systems were disguised during transit, and air units rehearsed countering enemy air attacks (Nezavisimoye Voyennoye Obozreniye, October 1).

The exercise was also important in the ongoing State testing of the new fifth-generation integrated automated command and control system for the RVSN (integrirovannaia avtomatizirovannaia sistema boyevogo upravleniya—IASBU). Testing of the IASBU is planned to conclude by the end of the year permitting further refinements with systems arriving in larger numbers in the RVSN by 2016: this will become the command and control system for the Rocket Forces over the next several decades. Its introduction will facilitate information exchange and the digital transmission of combat orders as well as allow for the rapid re-targeting of missiles. “IASBU links command and control together with wired, radio and satellite communication channels, which have the necessary durability and noise immunity, and will ensure bringing orders to the command and control as a command and control of various ranks, as well as directly to the launchers, including conditions of nuclear exposure and jamming,” explained RVSN Major Dmitry Andreev. Moreover, sources within the Russian Ministry of Defense suggest the IASBU is designed using an exclusively Russian electronic-component base, which is a significant achievement (Nezavisimoye Voyennoye Obozreniye, October 1).

Since 2011, flight tests, combat training launches, and further efforts to increase the service length of existing strategic nuclear systems has witnessed an intensification. In 2013–2014, the production and refinement of existing models of military equipment also expanded—mainly linked to mobile optoelectronic station trajectory measurement equipment with antenna complexes receiving telemetric data. The defense ministry has expressed confidence that the high-profile IASBU will be fully introduced in 2016 (Nezavisimoye Voyennoye Obozreniye, October 3).

The modernization of the RVSN is occurring in the context of the necessity to upgrade the nuclear triad, and in a strategic environment that is seen from Moscow as less stable and predictable. Moreover, following the deterioration of Russia’s relations with the United States and the North Atlantic Treaty Organization (NATO), linked to the crisis in Ukraine, Moscow plans revisions to its Military Doctrine. Some Russian experts believe this new document will define “the main enemy of Russia” and could indicate the conditions for Moscow to launch pre-emptive nuclear strikes (Nezavisimoye Voyennoye Obozreniye, October 3).

Although there is higher confidence in the RVSN’s modernization, there are grounds to question whether a target of complete modernization by 2020 is feasible. In 2013, Moscow announced plans to deploy a new type of strategic missile by 2018–2020, to replace the RS-20B Voyevoda Intercontinental Ballistic Missile (ICBM). Its replacement, Sarmat, would be the new heavy liquid system ICBM in which the top brass places much confidence. But Moscow-based specialists are unsure about the claims made by Rogozin concerning the RVSN reaching 100-percent modernization by 2020. Ruslan Pukhov, the director of the Center for the Analysis of Strategies and Technologies (CAST) suggests that 90 percent by 2025 could be more reasonable. Pukhov sees the main problem as tied to delivery platforms, reliant upon Western-manufactured machine tools, raising the question as to how sanctions on Russia will dent these high ambitions (Nezavisimoye Voyennoye Obozreniye, September 23).

Rogozin’s comments, therefore, may contain an element of bluster, as well as further efforts to boost morale in the defense industry during challenging times. But the promised nuclear surprise once again moves center-stage the role of nuclear policy in Russian military doctrine. With its doctrine under revision at a time when Moscow’s relations with the United States and NATO have arguably reached their lowest point since the Cold War, it is also possible that brinkmanship is an additional tool at play to cool the Western response over Ukraine. 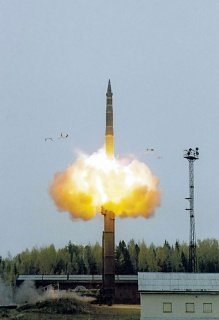 The Jamestown Foundation is proud to present a webinar on China’s... END_OF_DOCUMENT_TOKEN_TO_BE_REPLACED

On May 18, Senior Fellow Janusz Bugajski participated in a panel hosted by the European Conservatives and Reformists Group in the European Parliament, titled “The... END_OF_DOCUMENT_TOKEN_TO_BE_REPLACED

Over the past several years, the unique and widely misunderstood country of Belarus has risen to the attention of policymakers in Europe and the United States. Though for centuries an important invasion corridor across the plains of North Central Europe, its strategic importance had been overlooked by post–Cold War... END_OF_DOCUMENT_TOKEN_TO_BE_REPLACED