Large-scale armed clashes between Armenian and Azerbaijani troops, from April 2 to 5 (see EDM, April 6), drew the international spotlight back to the Armenian-Azerbaijani conflict over Karabakh, which has commonly been perceived as “frozen” for over two decades. This armed conflict passed through different stages of the conflict cycle. However, despite a ceasefire agreement reached by the conflicting parties in May 1994, successive mediation efforts led by the Organization for Security and Cooperation in Europe’s (OSCE) Minsk Group were not successful in achieving any breakthrough in the negotiation process, and no peace agreement has yet been signed. A situation of no war but no peace has prevailed for almost 22 years.

But following the diplomatic failure of the Kazan summit on June 24, 2011, and influenced by elections in Armenia and Azerbaijan in 2012 and 2013, respectively, the situation on the ground gradually changed. At the same time frozen negotiations have further hardened the positions of the conflicting parties and intensified the militarization of the Armenian-Azerbaijani front lines.

The escalation of violence along the Line of Contact (LoC) in early August 2014 was a first sign of the changed situation. However, three consecutive meetings that took place in August, September and October 2014 between Azerbaijan’s President Ilham Aliyev and Armenian President Serzh Sargsyan—through the mediation of Russian President Vladimir Putin, US Secretary of State John Kerry and French President François Hollande—contributed to a decrease in the number of frontline skirmishes at this time. Nevertheless, the situation escalated again on November 12, 2014, when an Armenian Mi-24 military helicopter was shot down by Azerbaijani armed forces after it crossed the LoC, reportedly preparing to attack Azerbaijani positions Apa.az, January 27, 2015; CACI Analyst, December 10, 2014. That was a second dangerous turning point in the conflict cycle.

Furthermore, the four days of fierce clashes along the LoC in early April 2016 were the deadliest since the 1994 ceasefire agreement. Azerbaijani positions and residential areas located along the LoC were subjected to severe mortar and artillery fire from the Armenian side, and the Azerbaijani forces responded with a counter-attack, consequently retaking several strategic heights (Azernews, April 14). The situation along the LoC has deteriorated further due to the Armenian shelling of Azerbaijani settlements in the Terter and Aghdam districts during the night of April 27–28 (Trend, April 28). One civilian was killed and eight others were injured (News.az, April 28). The Azerbaijani minister of defense, Colonel-General Zakir Hasanov, gave the order to retaliate against the Armenian Army’s firing positions (News.az, April 28). This re-escalation of the armed conflict sheds light on a number of important issues, as discussed below.

First of all, Armenia is a member of the Moscow-led Collective Security Treaty Organization (CSTO) and the Eurasian Economic Union (EEU). Yet, as noted by Russian political analyst Arkady Dubnov, Yerevan did not receive any expected support from these organizations due to their members’ lack of a unified position on the Karabakh conflict. On the other hand, Azerbaijan showed the world that its military rhetoric is not empty. And Baku proved successful in carrying out its multi-faceted political, psychological and diplomatic plan to draw the world’s attention back to the Karabakh conflict, which was an unpleasant surprise for Yerevan (News.az, April 19).

Second, despite Russian’s active diplomatic activity and a ceasefire agreement reached at the level of the chiefs of the general staffs of the armed forces of Azerbaijan and Armenia on April 5, 2016, Armenian President Sargsyan said in an April 25 interview with the Bloomberg News Agency that it is “unreasonable” for Armenia to resume peace talks with Azerbaijan over Karabakh without security guarantees. He also rejected a proposal for Russian peacekeepers to enter the conflict zone to separate the two sides (Contact.az, April 25).

Third, the international community frequently fails to distinguish the territory of contested former Nagorno-Karabakh Autonomous Oblast (NKAO) from the seven other adjacent occupied Azerbaijani districts (Lachin, Kelbajar, Gubadly, Zangelan, Agdam, Fizuli and Jebrail) abandoned by their previous Azerbaijani inhabitants in 1993. These districts were transformed by Armenian forces into “buffer zones” and are considered bargaining chips in the negotiations process. However, according to the 2010 report prepared by the OSCE Minsk Group Co-Chairs’ Field Assessment Mission to Azerbaijan’s occupied territories surrounding Karabakh, an estimated 14,000 people were still living in miserable conditions in small settlements in the towns of Lachin and Kelbajar at the time of the report’s publication. Moreover, according to the Field Assessment Mission, “for administrative purposes, the seven territories, the former [Nagorno-Karabakh] Oblast, and other areas have been incorporated into eight new districts” (Osce.org, March 24, 2011). And in a recent statement, Armenian Defense Minister Seyran Ohanyan said, on April 24, that there would be “no word about an inch of territory to be conceded to Azerbaijan” (Panorama, April 24). All this indicates that Armenia believes it will be able to keep all these territories under its control.

However, the current status quo is no longer satisfactory, and a huge gulf of distrust separates the opposing parties. It is apparent that this once-forgotten conflict could now culminate in either a renewed outbreak of violence, leading to further armed clashes; or it could be resolved by signing a peace agreement that could bring long-awaited peace, prosperity and development to all parties to the conflict. But one thing is clear: as Dr. Novruz Mamedov, the deputy head of the Presidential Administration of the Republic of Azerbaijan, states, there is a need for serious change in the substance of the mediation. Not only the attitude toward the conflicting parties must be changed, but also a concrete and clear-cut position will need to be demonstrated (Caucasus International, September 30, 2015).

The overall Karabakh peace process could be revitalized via a new approach to encourage the active engagement of all members of the OSCE Minsk Group. A seven-point plan on the settlement of the Karabakh conflict offered by the German Foreign Office may be a good example in this context. At the core of this plan lies “using dialogue as well as stabilizing and trust-building measures to achieve a stabilization of the cease-fire and an entry into a negotiated solution. This involves intensifying the work of the Minsk Group, exploring potential points of compromise and eventually entering negotiations for a long-term peace accord” (News.az, April 9). But it remains to be seen whether Berlin’s more active involvement in the peace process will lead to tangible results. 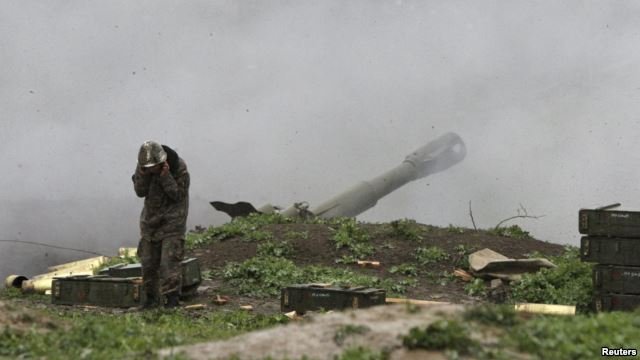