Despite Russia’s defense budget sequestration, ranging from 5 to 10 percent depending on the source, the political-military leadership continues to put a brave face on meeting the expectations generated by its fantastically ambitious rearmament plans to 2020. The Kremlin, no doubt buoyed by the performance of the Russian Armed Forces in seizing Crimea and during ongoing military operations in Syria, has much to boast about concerning progress toward a high-tech, compact and modern military. However, many of these advances are being pursued at breakneck speed without really addressing long-term underlying issues that are sure to create internal tensions and that could, ultimately, trigger some type of defense industry crisis in the future. In this sense, though there are remarkable advances occurring within the Russian military and its modernization, visible in its operations and exercises and carefully shown on Red Square during the annual Victory Parade, there is pretty much no prospect that papering over the cracks in the unreformed defense industry will yield success. The driver behind the longer term crisis looming in the defense industry stems from the very success currently achieved toward a high-tech conventional force with robust Command, Control, Communications, Computers, Intelligence, Surveillance and Reconnaissance capabilities (C4ISR). In turn, this will only exponentially increase the insatiable demand on domestic enterprise to research, design and innovate in order to satisfy technology-centric appetites (see EDM, April 19).

Deputy Defense Minister Tatyana Shevtsova, a survivor of the Anatoly Serdyukov era (defense minister in 2007–2012), is convinced that the “5 percent” sequestration will not negatively impact on the Armed Forces or its modernization plans. She describes using “reserve funds,” by implementing the “effective army” program, which allows some skimming off from funds originally intended for the maintenance of the Armed Forces. Such optimization plans to counter the current storm in state finances appear calculated to mitigate any tangible impact on military modernization. Yet, Shevtsova admits that spending costs have risen due to unforeseen events, such as Crimea and forming the Crimean group of forces, the intervention in Syria, or the flooding in the Russian Far East. Shevtsova says this compelled the maneuvering of costs and developing a flexible financial policy. If the level of cuts to defense spending increases, Shevtsova is confident this will not prove to be burdensome (Nezavisimoye Voyennoye Obozreniye, April 22).

Putin notes the pressures on the defense industry to cope with these issues, while praising their ability to deliver modern or innovative weapons and hardware to the Armed Forces. In 2015, for example, despite some delays, most orders were delivered in full and on time, resulting in the Armed Forces receiving around “4,000 major advanced models of arms and military equipment.” These deliveries included 96 aircraft, 81 helicopters, 2 multi-purpose submarines, 152 anti-aircraft missile complexes, 291 radars, and more than 400 pieces of artillery and armored vehicles (Interfax, March 11).

In late April, the deputy general director of Uralvagonzavod, Aleksey Zharich, reported that around 20 T-14 Armata tanks had passed military tests, and he said that “serial deliveries” could begin soon. The promise of the long-awaited latest air defense system—the S-500—is also characterized as imminent, but with no specific target date announced. Meanwhile, senior commanders are full of praise for advances in modernizing Russia’s electronic warfare (EW) assets. The chief of the Electronic Warfare Forces, Major-General Yury Lastochkin, claims that re-equipping the Armed Forces with the latest EW complexes has reached 46 percent of the total force structure (Nezavisimoye Voyennoye Obozreniye, April 17).

In an article in Nezavisimoye Voyennoye Obozreniye, Boris Voronkov, a specialist in military engineering, argued that the highly technical field of hydro acoustics is falling victim to a bureaucratic vicious circle: in his view, the Navy is creating a situation that will most likely further complicate its future development. According to Voronkov, as the Navy struggles with adopting a clear method of enhancing existing detection capabilities, which extend to 16 kilometers at present, the defense industry scientific structures and the defense ministry are in disagreement over how to resolve fundamental differences. Until these issues are finally resolved, the author suggests that progress will be inhibited, thus stalling advances in such a critical area (Nezavisimoye Voyennoye Obozreniye, April 15).

Major-General (retired) Igor Semenchenko, a former leading advisor to the Federation Council Committee on Defense and Security (2003–2013), on the other hand, sees continued systemic problems plaguing the defense industry, resulting from an acute shortage of qualified personnel. These shortages have long been known to Russian and foreign experts, who have regularly raised these issues in commentaries on the condition of the domestic defense industry. But this topic has resurfaced due to Semenchenko’s dire assessment of the state educational pans to 2030, which he regards as having potentially damaging consequences for future defense industry staffing (Voyenno Promyshlennyy Kuryer, April 26).

Semenchenko observers that leaked information on pre-planning for the new ten-year state armament program to 2025 focuses upon non-contact warfare and C4ISR systems. In his view, such leaks serve to increase the demand for highly qualified personnel in the defense enterprises. But he also notes that the comparatively low levels of salaries and social protection for such employees fails to attract sufficient numbers of young skilled workers. Semenchenko says that the share of workers at their most productive (35 years old) does not exceed the threshold of 25 percent, meaning that its current levels fail to promote the transmission of knowledge to the next generation. In this context, planned reductions in the numbers of state high schools across the country and other education policy initiatives will only worsen these issues, Semenchenko asserts (Voyenno Promyshlennyy Kuryer, April 26). He recommends, like others, the creation of a ministry for the defense industry, a federal law on the “military-industrial complex” to determine state monopoly control, as well as various tax reforms and incentives.

While there may currently be scope for optimizing and adopting financial flexibility to protect defense spending from unexpected challenges, the dysfunctional nature of an unreformed defense industry is ignored by the state’s leadership at its peril. It is precisely due to the increasingly high-tech demands placed on the domestic defense industry that serve to exacerbate these issues. Despite these inherent institutional weaknesses, military modernization advances are certainly in evidence, but the system is likely to over-heat and, with it, destroy the elite’s hope that the defense sector can become a driving force within the wider economy. 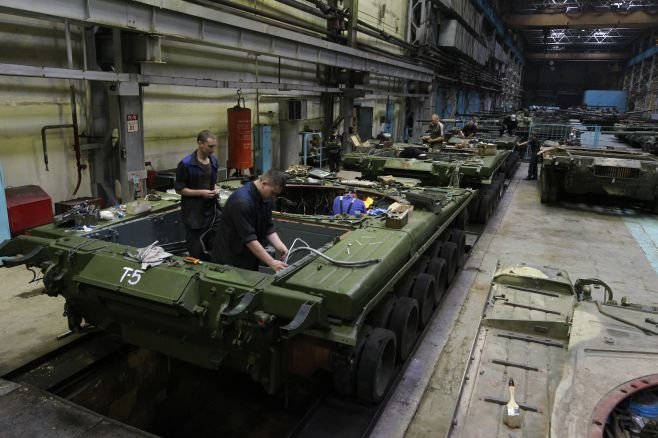 Back
Trapped Between War and Peace: The Case ..Next
Russian Money for Belarus: Not for a Bas..