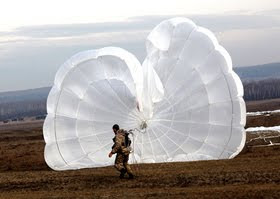 The following is Part Five of a five part series on the Russian efforts to stake a strategic claim on the Arctic region.

Further proof that the Arctic was emerging as an area of economic and military competition appeared just days ago. On July 5, the Russian atomic icebreaker Rossiia and the research vessel, Akademik Fedorov, sailed from Murmansk to undertake a second year of seismic prospecting to establish Russia’s claim to the Lomonosov and Medvedev Ridges (“Arctic shelf prospecting in view of global warming,” The Voice of Russia, 21 July 2011). On July 11, the giant Russian mineral and chemical company EuroChem announced that two bulk ore carriers, the Mikhail Kutuzov and Dmitri Pozharskii, were leaving Murmansk under the escort of a Russian atomic icebreaker, and would sail the Northern Sea Route to deliver 40,000 tons of iron ore concentrate to the North China port of Xingang with an estimated sailing time of 25-28 days. EuroChem expects to expand iron ore experts to China to millions of tons over the next few years (“EvroKhim otpravil dva sudna s produktsiei v Kitai po Severnomu morskomu puty,” FK Novosti, 20 July 2011). On the same day, the press reported that Russia’s United Shipbuilding Corporation would embark on the construction of six new icebreakers – three atomic-powered and three diesel-electric powered. The vessels will be built in Russia and Finland, with hulls constructed at the Admiralty Yards in St. Petersburg – the final work done at the Arctech Shipyard in Helsinki, a Joint venture of Russia’s United Shipbuilding Corporation and the South Korean Shipbuilding Giant STX (Aleskei Mikhailov, “Nov ledokol na dorog,” Rossiiskaia gazeta, 20 July 2011).

The collaboration of United Shipbuilding Corporation (USC) and STX has, of course, another connection: the joint Franco-Russian project to build fur Mistral-class amphibious assault ships, two in France and two in Russia, with the USC and STX being involved. USC President Roman Trotsenko has recently said that Russia could build an atomic-powered aircraft carrier and have it operational by 2023, a claim, which Minister of Defense Serdiukov denied, saying Russia had no intention of building such ships. Trotsenko’s statement set off an immediate response in China, where PLA naval officers spoke of the great utility of aircraft carriers to strengthen Russian influence there. Il’ia Kramnik, military correspondent for RIA Novosti, suggested that the Chinese enthusiasm reflected an attempt at strategic misdirection. The Chinese understand that aircraft carriers remain a major card in command of the sea. Like Kaiser Wilhelm II, who encouraged Russian naval development in the Pacific to complicate British plans to deal with his “Atlantic Fleet,” Beijing wants nothing more than to ensure US Carrier task forces are deployed across the globe, thus reducing the prospect of a major concentration in the Asian-Pacific Region to challenge Chinese interests. Along this line of thinking, Russian carriers in the Arctic will demand an American response, representing one more area for US-Russian tensions, drawing Russia closer to China and at the same time reducing US naval presence in the Western Pacific. Strengthening Russia in the Arctic is needed by China to achieve the two goals that Germany had at the beginning of the 20th Century. First, this will provoke a rapid response from the global leader (the US), which will find it necessary to strengthen its own forces there. Second, the neighbor (Russia) will be deflected from the key region and shift its efforts further, untying Beijing’s hands just as it was suppose to do for Berlin a century ago. While Russia should protect its interests in the Arctic, the author argues that it should not fall prey to “dangerous illusions” and provoke an armed confrontation with the US and NATO (Il’ia Kramnik, “Mirovoi balanc i novye avianostsy,” Voenno-promyshlennyi kur’er, 20 July 2011).

All these developments point to Russia’s Arctic engagement as an expected part of emerging competition for resources and economic advantage. The deployment of two brigades would enhance credible military presence to back geo-political claims. But there is no reason at this stage to respond with an arms race in the Far North, which would mean another area of US-NATO and Russian conflict and might serve the interests of another power with a different geo-strategic focus and long-range strategy. While Arctic warming has been seen as a blessing in terms of development opportunities, it is important to keep in mind that there will also be negative impacts on existing settlements and facilities as sea levels rise and the permafrost becomes more unstable. Recent reports from the Ministry of Extraordinary Situations have placed the possible loss of permafrost by 2050 at 15-30 percent. Andrei Bolov, the head of the Ministry’s Department for Monitoring Disasters, stated: “The negative impact of permafrost degradation on all above-ground transportation infrastructure is clear” (“Russia May Lose 30% of Its Permafrost by 2050,” RIA Novosti, 28 July 2011). Indeed, available evidence suggests that climactic changes in the Arctic are moving very fast, with the northern sea route now much more open to navigation. Russia’s Federal Hydro-Meteorological and Environmental Monitoring Service announced that ice fields this year are down by 56 percent, in some areas making navigation possible through September this year. Global warning seems to be having even more impact in the Arctic than in other regions of the globe (Maria Kolesnikova, “Arctic Ice Melt at Near Record Clears Shipping Route to Asia, Russia Says,” Bloomberg, 3 August 2011).

Recent press reports claim that the Federal Security Service (FSB) will have a leading role in the defense of the Arctic, which is supposed to become the “leading strategic resource base of the Russian Federation by 2016.” Denis Terent’ev, reporting for Argumenty nedeli, says that this force will include a regiment of naval infantry in Murmansk and the motorized rifle brigade in Pechenga, with a combined strength of 10-12,000 men, who will join the recently expanded FSB border guard units of 6-7,000 men. These units will enjoy the support of the North Fleet, which has a strength of 45-50,000 men and is the largest naval force of the Russian Federation. Nikolai Patrushev, former head of the FSB and now Secretary of the Security Council, says that the force will be led by a joint command and will be equipped with weapons and technology for operations in the Arctic, including new icebreakers. There are as yet no estimates on the costs of these efforts, but the resource base in the far north, which includes an estimated 7 percent of the world’s oil reserves and two thirds of its reserves of natural gas, will fully justify these expenditures as competition for the Arctic increases. All of the powers contending for dominion in the north are building icebreakers. China, South Korea, and Great Britain are training their special forces for “the struggle with terrorists in the Arctic,” and the US is increasing its naval presence in the region. Terent’ev says that while war in the Arctic appears unlikely, there is good reason for the FSB to expand its presence to support Russian interests and influence where private firms invest in the development of the Arctic Shelf (Denis Terent’ev, “Snezhnye voiny FSB,” Argumenty nedeli, 10 August 2011).

Back
Russia: The “New Look” Faces North (..Next
Hungary’s MiGs Up for Sale

The Jamestown Foundation is pleased to host a forthcoming webinar... END_OF_DOCUMENT_TOKEN_TO_BE_REPLACED

Jamestown Foundation Analyst Kseniya Kirillova offered her expert analysis on Putin’s “partial mobilization” announcement to G-Zero. “The Kremlin calls it ‘partial’ so as not to... END_OF_DOCUMENT_TOKEN_TO_BE_REPLACED

The December 2021 issue of Militant Leadership Monitor features a piece on the emerging leadership of the Islamic State in Central Africa Province’s (ISCAP) Congolese branch; a profile of Jaal Marroo, who is the leader of Ethiopia’s Oromo Liberation Army;  an analysis of the future of Pakistani Sindhi nationalist... END_OF_DOCUMENT_TOKEN_TO_BE_REPLACED