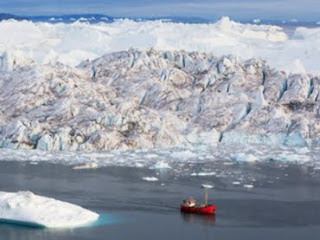 The following is Part One of a five part series on the Russian efforts to stake a strategic claim on the Arctic region.

In early July, Russia’s Defense Minister Anatoly Serdiukov announced the creation of two brigades for the defense of Russia’s Arctic region. He went on to state that the General Staff was working out their place of deployment, numerical strength, armament and supporting infrastructure. In this process, Russian specialists had taken into account foreign experience with Arctic forces, including Finnish, Swedish, and Norwegian. The report speculated that the brigades would be stationed in Murmansk or Archangelsk (Murmanskii vestnik, July 5). This announcement comes as no surprise after four years of Russian claims to expanded interests in the Arctic, especially the development of energy resources. Vladimir Putin had urged development of the Russian Arctic and promoted Russia’s extended territorial claims while President. He spoke to a Party conference of United Russia in Ekaterinburg on the need for additional private energy investment and linked that to enhancing Russian military presence in the Arctic. He stated that Russia is seeking to expand there, and will “firmly and consistently” defend its geopolitical interests in the region Moscow Times, July 1).

On July 6, Russia announced that it will submit a claim to the United Nations to expand its Arctic shelf borders as scientists embarked on a new expedition to prove its ownership of energy-rich territory. Deputy Prime Minister Sergei Ivanov, speaking from Narian-Mar in Russia’s far north, said, “I expect that next year we will present a well-based scientific claim about expanding the borders of our Arctic shelf.” The stakes here are quite high with Denmark, Canada and Russia presenting claims to the region. The new expedition will continue the work of one mounted in 2007. The author stressed the significance of these claims for Russia’s energy future: “Geologist estimate that in the depths of the Arctic Ocean are located 30 percent of the world reserves of natural gas and 13 percent of world oil reserves. If Russia gets the right to the Lomonosov Ridge, it will get control over 60 percent of the hydrocarbons, which might be located in the region” Nezaviimaia gazeta, July 7).

The decision to create Arctic brigades for the Russian Army and Putin’s linkage of such forces with Russia’s plans to transform the Arctic into a new frontier for marine time trade and energy extraction stands in stark contrast with the situation in the region only a decade ago. Russia’s Arctic, including its northwest strategic direction covering the Kola Peninsula, was an explicit example of Russia’s decline since the collapse of the Soviet Union. The Soviet state had poured resource into the northwest to build a huge naval complex to supports its Northern Fleet, which included the surface, submarine, and naval aviation forces intended to defend the Barents Sea as a bastion of the Soviet Union’s SLBNs of the Delta and Typhoon classes. By the end of the 1990s, that fleet had declined and one of the chief challenges facing the region was the de-coring of the reactors of old nuclear submarines as part of their decommissioning. The number of nuclear submarines from the Northern Fleet needing decommissioning was staggering and well beyond the capacity of Russia’s facilities and its defense budget. International cooperation was required. At the same time, Russia’s urban centers north of the Arctic Circle were experiencing population flight as state subsidies and defense orders disappeared (Jacob W. Kipp, “Russia’s Northwest Strategic Direction,” [July-August 1999], pp. 52-65). These problems have not gone away.

The nuclear clean-up at Andreev Bay has made progress and Minatom has promised that by 2025 the residents will have a “green pond.” In the meantime, 40 reactor cores are stored in the area and another seven will go into storage this year (Murmanskii vestnik, July 21). Moreover, the decay of the old Soviet infrastructure for its nuclear submarine forces continues. The submarine base at Gremikha, which supported 40 nuclear submarines and had a population of 30,000, is dying with no boats and a population of 1,300. Social services barely function, the bakeries are closed, and the population feels abandoned by those in power. The climate tests human endurance. The wind howls like mad dogs and the rain beats down sharp and icy. As Sergei Leskov reported, Gremikha is a dying town with a people who have no future (Izvestiia, July 18).

Russia’s economic recovery over the last decade, combined with the discovery of significant reserves of oil and gas in the North and the impact of global warming on Arctic ice fields have brought with them a renewed enthusiasm for Arctic investment and development in Moscow. In the summer of 2007, “Arctic mania” hit Russia. That summer, a geological polar expedition on a nuclear icebreaker returned after six weeks to report that the Lomonosov Ridge was part of the Russian mainland, and the claim went forward for including 1.2 million sq. km to Russian territory, an area larger than Texas and California combined. The chief geologist on the expedition, Valerii Kaminskii estimated the gas and oil reserves at 100 billion tons. “Russia must use all its resources to retain its leadership position in the Arctic,” declared the Governor of Murmansk Oblast’, Yurii Evdokimov, at meeting of the National Anti-Terrorism Committee under the chairmanship of Nikolai Patrushev (“V koridorakh vlasti dolzhny sokhranit’ liderstvo v Arktike,” Murmanskii vestnik, 27 June 2007). Andrei Reut, writing about the economic potential of the region being claimed, framed the issue as one of Russian national security:

“For Russia, the exploitation of the shelf is the chief means by which to remain a European energy provider in the 21st century. In the near term, the reserves located in Western Siberia will be exhausted and the reserves in Eastern Siberia and Timano-Pechorsk Basin could prove to be insufficient to secure the annual production of 560 million tons needed. Therefore the struggle for the shelf is for us a matter of national security” (Andrei Reut, “Rossiia podrastet na 1 200 000 kvadratnykh km Arktiki,” Izvestiia, 27 June 2007).

The War in Ukraine and the Growing Risk of Russia’s... END_OF_DOCUMENT_TOKEN_TO_BE_REPLACED

On September 11, Jamestown Foundation Senior Fellow Janusz Bugajski was interviewed by the Polish Naval War Academy regarding his book, Failed State: A Guide to Russia’s... END_OF_DOCUMENT_TOKEN_TO_BE_REPLACED

As a full-fledged war between Ukrainian forces and Russian-backed irregulars rages on in Ukraine’s eastern region of Donbas, Western defense experts are only now beginning to thoroughly assess the military lessons of the Russia-Ukraine conflict. Meanwhile, the Russian military again looks poised to intervene in eastern Ukraine as it... END_OF_DOCUMENT_TOKEN_TO_BE_REPLACED