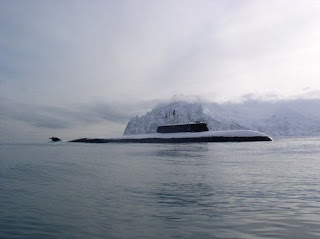 The following is Part Two of a five part series on the Russian efforts to stake a strategic claim on the Arctic region.

In late June 2007, the Shipbuilding giant Sevmash, located in Arkhangelsk Oblast’, was looking for a partnership with Gazprom, Rosneft and Lukoil, along with foreign investors, to create a new infrastructure to exploit the gas and oil deposits. This included ice-resistant platforms, icebreakers, sea-going tugs, terminals, pipelines, a new dry-dock and LNG tankers. The investment in this infrastructure was estimated at 6.5 billion rubles (Pravda Severa, June 28, 2007). However, the challenges of energy extraction from under the Arctic Sea have proven even harder than expected, and have pushed Russian investors to seek both foreign capital and expertise in what is viewed as a long-term development program. Indeed, Russia has promised to changes its laws to encourage foreign invest in Arctic projects (BarentsObserver.com, June 1). Russian specialists estimate Arctic Russia’s energy reserves to be disproportionally in natural gas.

While scientists may support and diplomats argue for such a claim, military power in the region will figure in the calculus of control over these resources. Russian discussions of an enhanced military presence in the Arctic go back many years and were articulated in the document “The Foundations of State Policy in the Arctic to 2020.” Speaking to a plenary session of the Security Council on Arctic policy in September 2008, President Medvedev stated: “This region, without any exaggeration, has strategic significance for our country, and the solution of many long-term tasks is connected directly with its development” (Na Strazhe Zapolar’ia, September 20, 2008). He addressed the geopolitics of the Arctic, the need to secure the northern sea route for navigation, protect the ecology of the region and to press ahead with the development of natural resources, including energy in the Arctic continental shelf. The measure was described as one that would mobilize the efforts of many ministries and state institutions. But it fell to the Secretary of the Security Council to state the underlying need: the defense of Russia’s interest in the Arctic. Nikolai Patrushev said that the President had ordered the Security Council to complete work on the document covering Arctic policy by December 1, 2008. “We must protect our interests in the Arctic, but we understand that the Arctic states – Canada, Norway, Denmark and the USA will protect their own interests” (Kommersant, September 18, 2008). The final document, as signed by President Medvedev, looked to the long-range development of the region and contemplated bilateral and multilateral cooperation in aspects of Arctic development. But it also contained an explicit charge to enhance Russia’s Arctic defenses:

Back
Russia: The “New Look” Faces North (..Next
Does Russia Conceal the Real Casualties ..

The War in Ukraine and the Growing Risk of Russia’s... END_OF_DOCUMENT_TOKEN_TO_BE_REPLACED

On September 11, Jamestown Foundation Senior Fellow Janusz Bugajski was interviewed by the Polish Naval War Academy regarding his book, Failed State: A Guide to Russia’s... END_OF_DOCUMENT_TOKEN_TO_BE_REPLACED

The January 2019 issue of the Militant Leadership Monitor features a brief on Zakir Musa, the leader of the Kashmir-based, al-Qaeda affiliate Ansar Ghazwa tul Hind; an assessment of the Sunni, Salafist, Lebanese ally of Hezbollah, Ahmad Abd al-Karim al-Saadi; an analysis of the recently captured wali of Islamic State, Jamal al-Mashhadani,... END_OF_DOCUMENT_TOKEN_TO_BE_REPLACED