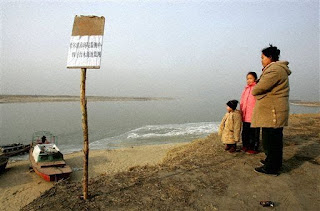 The question as to the actual Chinese population in Russia has been a highly contested debate since the collapse of the Soviet Union. Russians, acutely aware of the vacuum being created by the decline of Russia’s population and by the parallel growth of China’s, point out that the situation in the Russian Far East is both unprecedented and unsustainable. On one side of the border are China’s Heilongjiang, Jilin, and Liaoning provinces – home to over 107 million people. On the other side are the four southern provinces of Russia’s Far East (RFE) – Amur Oblast, Jewish Autonomous Oblast, Primorskii Krai, and Khabarovks Krai – with a combined population of a little more than 3 million people. Russians from the western part of the country, unfamiliar with the reality of the situation in the East, imagine China as a giant teapot – slowly pouring its excess population into the pristine Russian basin. For instance, in 2007 Russian politician Dmitry Rogozin spoke of Chinese migrants crossing the Amur River in “small groups of 5 million”. Russian pundits such as Radio Free Europe’s Aleksandr Golts and Echo Moskvi Radio’s Yulia Latynina have repeatedly warned of the Eastern provinces being overrun by Chinese migrants. Even western observers such as David Wall have cited concern of an impending avalanche of Chinese migrants. These fears, however, are highly overblown.

According to the latest Russian census (2002) there were only 35,000 Chinese living in the whole of Russia! This number, however, excluded seasonal workers such as shuttle traders, tourists, and illegal immigrants. In fact, it is general consensus that the overall number of Chinese in Russia is between 400,000 and 500,000. It is estimated that approximately 75% of them are in Russia legally and another 25% illegally.

Generally speaking, the Chinese in Russia fall under one of four categories: legal laborers, trafficked workers, traders, and investors. The legal laborers compose the largest percentage of Chinese migrants as their dexterity, diligence, and sobriety compares favorably with the typically languid Russian worker. Furthermore, they are willing to perform jobs that Russians do not want and to work for wages that Russians would not accept. Oftentimes, these workers are willing to live in deplorable conditions as attested by the Hooverville-like shacks around Moscow City. Sadly, not all of these workers are in Russia on their own accord. The Chinese Triads are highly influential in Russia and often work in conjunction with the Russian Mob to traffic workers for hard labor. Most such trafficked individuals, however, are prostitutes, not laborers. It’s unclear just how many Chinese women have been lured into Russia by traffickers, but the number is certainly in the thousands. For instance, there have been numerous reports of a Chinese-only brothel being operated by the Triads on Prospect Mira – right in the center of Moscow.

Chinese traders are highly prevalent both in western and eastern Russia. In the East, they often work as peddlers or shuttle traders. However, a Russian law passed in April of 2007 prohibited Chinese (and other foreigners) from carrying out cash transactions and thus led to a significant reduction among Chinese crossing the border. According to British Sinologist, Bobo Lo, shuttle trading has increased since 2007, but is now almost entirely conducted by Russians. Still, a number of Chinese do decide to stay and set up shop in Russia. Often, this is due to marriage and, in fact, intermarriages between Russian women and Chinese men have increased dramatically in recent years. There are also those who consider life in Russia to be superior to that in China. This is generally a rare opinion for Chinese living in the RFE, where large majorities would prefer to return to China. In Moscow, however, over 65% of the Chinese traders say that they are interested in obtaining Russian citizenship or becoming permanent residents. This opinion is certainly not due to the legendary benevolence and hospitality of the Moscovites. According to surveys conducted by Russia’s Demoscope Weekly, Chinese residents in Moscow face the greatest amount of prejudice and discrimination in all of Russia (alternatively, the best city for the Chinese to live is Khabarovsk). However, unlike other parts of Russia, Moscow presents Chinese residents with ample opportunities to make money. Until 2009, Chinese traders in Moscow operated hundreds of small businesses in the expansive Cherkizovsky market. The market was closed last year, ostensibly to make room for public housing, but more likely due to the blatant corruption that was taking place at Cherkizovsky. Apparently, the market even had its own security force and Moscow police didn’t dare collect bribes from the merchants operating there. The market put a temporary dent in the profit margins of traders, but did little to stymie the resourceful Chinese who moved to other forums such as Sevastopol and Balashikha. There is now word of a “new Cherkizovsky” being opened in the Lenin district of Moscow, sponsored both by the Chinese Diaspora and by the Chinese government.

There are also some private Chinese investors in Russia, but they are surprisingly few and far between. In 2008, Chinese Foreign Direct Investment in Russia was approximately $3 billion – equal to 5% of overall investment by foreigners in Russia and approximately 2% of overall Chinese FDI throughout the world. Moreover, most of the Chinese investments were made by large state-owned enterprises, not small or medium sized businesses. On the bright side, there has recently been a piqued Chinese interest in Russian real estate after the Beijing real estate giant, Jin Yuan, announced plans to invest 1 billion dollars into development of projects in Moscow. However, most Chinese investments take place in western Russia because corruption, unreliable business practices, and downright fraud have kept Chinese investors away from the Russian Far East. Often, Russians in the RFE oppose any type of Chinese investment for fear that it will result in a wave of Chinese migration. For example, the “twin cities” of Heihe and Blagoveshensk, lying on opposing sides of the Amur River, still do not have a bridge connecting them despite numerous attempts by Chinese companies to construct such a conduit. Russian authorities simply will not allow it. Nikolai Kukharenko, a resident of Blagoveshensk, puts the Russian view into perspective: “it’s a law of physics that a vacuum has to be filled. If there are no Russian people here then there will be Chinese people”. So far, the vacuum remains vacant, but Kukharenko is not taking any chances. He runs the Chinese-sponsored Confucius Institute in Blagoveshensk.

The Jamestown Foundation was proud to host a webinar on... END_OF_DOCUMENT_TOKEN_TO_BE_REPLACED

Jamestown Foundation Analyst Richard Arnold was interviewed by PolitiFact for a story on the Lie of the Year 2022, or Putin’s long list of lies... END_OF_DOCUMENT_TOKEN_TO_BE_REPLACED

Russian authorities are extremely divided about the right position to take as Moscow increasingly concerns itself with the Afghan question. They have continually criticized NATO’s decisions though, at the same time, many Russian politicians recognize that the coalition’s failure to stabilize Afghanistan would place Russia in great danger. To... END_OF_DOCUMENT_TOKEN_TO_BE_REPLACED