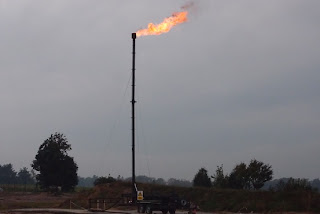 By Matthew Czekaj
As the parliamentary election season heats up in Poland, the country’s Prime Minister, Donald Tusk, is crisscrossing the country in his “Tuskobus” [link in Polish], highlighting the successes of his government and making campaign promises on behalf of his ruling party, Civic Platform. Over the long term, however, perhaps the most important strategic game-changer achieved by the Tusk government has been to bring the shale gas extraction industry to Poland.
On September 18, Tusk visited[link in Polish] Lubocino in northern Poland where Polskie Górnictwo Naftowe i Gazownictwo SA (Polish Oil and Gas Company – PGNiG) had just torched a flare on one of its gas rigs. This is the second successful production of “unconventional” natural gas – that is, gas trapped in shale rock deposits – in the country; however it is the first well with a real chance of profitability. With a smile on his face, Prime Minister Tusk told reporters that he was “modestly optimistic” that commercial shale gas production in Poland may begin by 2014.
According to a US Department of Energy study, Poland is estimated to possess 5.3 trillion cubic meters of natural gas locked up in its shale deposits – enough to supply the Central European state for 300 years. Warsaw is championing shale gas as the key to breaking the country’s dependence on coal power for electricity generation and on imports from Gazprom, which fills 40 percent of Poland’s natural gas needs. According to Tusk, with success in unconventional gas extraction, Poland would be “gas secure” by 2035 (AFP, September 18). In addition, the Polish government has promised that shale gas would contribute to overall lower natural gas pricesin the national market.
Nor would the shale gas boon be for domestic consumption only. With smart investment in north-south pipeline connections, Poland may want to export north to the Baltic States and south to the Czech Republic (Hospodarske Noviny, September 16), for example. According to a study by the Kościuszko Institute, Polish gas may alsogo to Belarus, Ukraine, Denmark, and even Holland and the United Kingdom. Germany would also be an attractive target, especially after Angela Merkel’s government promised to phase out the German nuclear power industry. However, having to compete with the large volumes of Russian gas coming through the North Stream pipeline might preclude this in the end.
The positive news out of Lubocino is helping to drown out Poland’s other mega-scale energy security project: nuclear power. As PGNiG Strategic Planning Bureau director Marcin Lewenstein [link in Polish] told Wprost24recently, though atomic power remains full of potential, PGNIG will focus its financial resources on shale gas extraction.
With the successof its first gas-producing well, PGNiG now plans to attempt to drill sideways into the shale. The process of extracting shale gas, known as hydraulic fracturing or “fracking,” has raised the ire of many environmentalists (and Gazprom) and has even been banned in some places – most notably in France. However, the Polish government considers the potential danger to underground sources of drinking water fully possible to mitigate with the right amount of regulation. Consequently, Poland is the second country in the world after the United States to attract international energy companies with a serious intention to drill for shale gas.
Tusk boldly predicted that thanks to shale gas, Poland had the possibility to become energy secure within his lifetime. Yet, mindful of the dangers of a “resource curse,” the Prime Minister announced that government proceeds from shale gas would go into a Norwegian-style national investment fund, which would be used to pay pensions, back environmental projects, and help subsidize counties and districts where fracking is to take place.
Regional enthusiasm for unconventional natural gas extraction is not limited just to Poland. Geological surveys suggest that the massive 405 mile belt of gas fields, which stretches from the Polish coast diagonally to the southeast, likely also extends substantially into Ukraine. Moreover, with advances in fracking technology in recent years, Hungaryis also looking to tap what are believed to be large shale gas deposits buried deep in the southeastern corner of the country. Hungary, which uses a disproportionately high amount of natural gas in its energy mix and is almost exclusively reliant on Russian gas for its imports, predicts a breakthrough in shale production by 2015 – not coincidentally the same year its long-term gas contract with Gazprom is scheduled to expire. The Central European country additionally intends to set up a region-wide gas exchange market.

As the US example illustrates, unconventional natural gas extraction has the potential to completely change global energy markets. Within a few short years, fracking doubled US estimated natural gas reserves, turning the country from a net importer to an exporter of gas. Yet, to replicate America’s success in Central Europe, Poland will need to invest many billions of dollars into wells and exploration. Moreover, it will need to avoid any major environmental accidents, which can quickly turn public opinion against hydraulic fracturing. True energy security in the region is still many years away, but at least a piece of it may finally be within grasp.

The Jamestown Foundation is pleased to host the webinar, “The... END_OF_DOCUMENT_TOKEN_TO_BE_REPLACED

The May 2016 of Militant Leadership Monitor includes briefs on Khalifa al-Ghaweil and Ismail Muhammad al-Salabi – two influential actors in eastern Libya. The first profile is of Muslim al-Shishani, a Georgian-born militant fighting in Syria. The second profile is of Naeem Bokhari, the recently arrested military mastermind of... END_OF_DOCUMENT_TOKEN_TO_BE_REPLACED