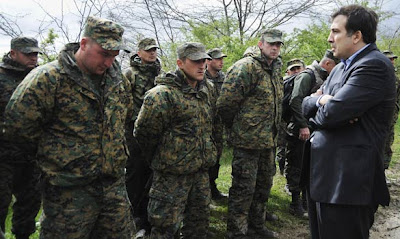 On May 5, on the eve of the crisis response exercises, which commenced today and which are held under the auspices of NATO’s Partnership for Peace (PfP) program in Georgia, a 500-strong tank battalion under the command of Colonel Mamuka Gorgiashvili rebelled against the authorities at the Mukhrovani military base, 30 km (20 miles) east of Tbilisi. Prior to that, in the comments carried by the Interfax news agency Gorgiashvili blamed Saakashvili’s government for the ongoing political confrontation with the opposition. The Georgian government reacted promptly by dispatching the troops of the Ministry of Internal Affairs (MIA) to encircle the Mukhrovani base and contain the mutineers. In an ensuing standoff, which included direct phone conversations between President Saakashvili and one of the rebel leaders, the mutineers were asked to lay down their weapons and surrender without conditions under the threat of force. By the second half of the day the rebellion was over, as President Saakashvili flanked by his bodyguards and accompanied by the Minister of Internal Affairs Vano Merabishvili and his retinue arrived at the Mukhrovani base to personally tour the facility and meet with the mutineers.

Throughout the day the MIA issued contradictory statements regarding the attempted mutiny at the Mukhrovani base. Initially the ministry media liaison Shota Utiashvili spoke of a large-scale military coup with the maximum objective of fomenting the nationwide insurrection and the minimum objective of foiling the planned NATO exercises, which was uncovered as a result of the two-month-long investigation. During the press briefing Utiashvili showed the undercover video footage of Gia Gvaladze, who was described as one of the suspected coup organizers, in which Gvaladze discusses the details of the planned mutiny. In particular, Gvaladze reveals the hit list of the senior government officials, including Deputy Foreign Minister Giga Bokeria, MIA Minister Vano Merabishvili, Tbilisi Mayor Gigi Ugulava and Senior MP Givi Targamadze, who were to be physically eliminated. In the secretly obtained footage Gvaladze claims that a 5,000-strong Russian military unit was to assist the rebels once they reached Tbilisi. Gvaladze also identifies former senior military and security officials – former Defense Ministers Davit Tevzadze and Gia Karkarashvili, former State Security Minister Jemal Gakhokidze, and former Commander of National Guard Koba Kobaladze – as people, who would support the coup. More importantly, Utiashvili claimed that there was a strong link between the Russian special services and the coup organizers. Utiashvili stated, “We have information that the rebels were in direct contact with the Russians, that they were receiving orders from them, that they were receiving money from them.”

According to the MIA press release, Gvaladze was arrested on the evening of May 4, hours before the mutiny at the Mukhrovani base. As Utiashvili explained, Gvaladze is thought to have received orders from Koba Otanadze, who once participated in the military uprising at the Mukhrovani base in 2001. The Georgian law enforcement authorities are currently trying to identify Otanadze’s whereabouts. It appears that Otanadze and a couple of his civilian accomplices fled during the one-hour ultimatum that the government gave to the Mukhrovani mutineers. Another person, who is being investigated in connection with the military coup, is Zaza Mushkudiani, the commander of the ranger battalion located in Ortachala, on the outskirts of Tbilisi. All in all, the Georgian broadcasting company Rustavi 2 reported today that police arrested 13 civilians and 10 military servicemen in connection with the coup investigation while 50 others are being investigated on related charges. The MIA published the list of 11 detainees and announced a 50,000 GEL ($30,000) bounty for information leading to capture of Koba Otanadze, Levan Ameridze and Giorgi Krialashvili.

In his nationwide televised address later that afternoon President Saakashvili described the Mukhrovani incident as a “serious threat” and warned Russia “to refrain from any types of provocations because such provocations will not work in Georgia.” However, in the subsequent MIA press releases and government statements (both on and off the record) there has been a noticeable effort to de-emphasize or intentionally omit any mention of Russian involvement. For instance, when the Voice of America pressed Utiashvili to produce specific evidence suggesting the Russian connection, he said that he was not 100 percent certain and thus could not provide official confirmation of Moscow’s involvement. Instead now the Mukhrovani mutiny has been described as primarily aimed at derailing the NATO exercises. Similarly, an official from President’s Office, told the Associated Press that the mutiny was planned by a few disgruntled officers, who organized a similar revolt at the same base in 2001. At the same time the official scaled down the objective of the mutiny by dropping any reference to a coup or Russian involvement.

The Russian reaction to the events in Georgia was predictably dismissive. The Russian Deputy Foreign Minister Grigory Karasin blamed the Georgian leadership for “trying to accuse Russia of totally insane things.” Russia’s envoy to NATO, Dmitry Rogozin’s remarks, on the other hand, suggested that the Mukhrovani revolt provided Moscow with more ammunition to mock the NATO exercises in Georgia. As Al Jazeera English reports, Rogozin noted that NATO would be better off holding its exercises “in a madhouse” since “Georgia’s military cannot properly receive their colleagues because they are rioting against their own president.” More importantly, citing the NATO exercises in Georgia and the recent expulsion of Russian diplomats from Brussels, Rogozin announced that the Russian Foreign Minister Sergei Lavrov will not be attending the ministerial-level meeting of the NATO-Russia Council (NRC) planned for May 19. Against the backdrop of bilateral attempts to revive dialogue between Russia and NATO, Moscow’s decision to pull out from the NRC meeting is potentially damaging considering that it was supposed to be the first meeting on such high level since the Russia-Georgia war of last year.

Meanwhile, as expected, Armenia used the Mukhrovani incident to pull out from the NATO exercises in Georgia at the very last moment. The statement issued by the Armenian Ministry of Defense obliquely refers to the “current situation” as the justification for Yerevan’s decision.

NATO reacted to the Mukhrovani revolt with understandable consternation. Bristling at President Saakashvili’s shorthand reference to the NATO exercises, Secretary-General Jaap de Hoop Scheffer’s spokeswoman, Carmen Romero offered the following correction: “It is not a NATO exercise, but an exercise of NATO with its partners which Georgia is hosting.” Romero added that the exercises should not be “misinterpreted or misused by anybody for internal political purposes.” This probably had a desired impact on the Georgian government as the statement issued today by the Office of the President emphasized that the Mukhrovani mutiny was an isolated incident that “must not be used for political or other purposes.”

As the investigation unfolds more details will become public soon, but it is worthwhile to make some preliminary observations in conclusion. First, notwithstanding the gravity or lack thereof of the allegations leveled by the Georgian government with regard to possible Russian involvement, the participation of so many former and active senior defense and security officials is indicative of the necessity to carry out a comprehensive vetting of the officer corps at the Ministry of Defense. Second, in the absence of diplomatic relations with Russia, which, in turn, implies absence of diplomats on the ground, any reference to the Russian involvement means that the pool of former and active defense and security professionals in Georgia has been thoroughly penetrated by the Russian intelligence to the degree that the connections forged in the 1990s can be reactivated. Third, more broadly speaking, the tense “no-war-no-peace” situation has put Georgia into the “pressure cooker” that makes it easier for the external forces to find and manipulate the renegade elements within. In this regard today’s arrest of Vakhtang Maisaia, who served as the counselor at the Georgian mission in NATO in 2004-2008, on charges of spying for Russia, represents a very vivid example. In a particularly egregious treachery, Maisaia frequently passed sensitive information to Russia at the height of the Russia-Georgia war in August of last year.

On August 4, the Jamestown Foundation held a webinar  on... END_OF_DOCUMENT_TOKEN_TO_BE_REPLACED

On September 11, Jamestown Foundation Senior Fellow Janusz Bugajski was interviewed by the Polish Naval War Academy regarding his book, Failed State: A Guide to Russia’s... END_OF_DOCUMENT_TOKEN_TO_BE_REPLACED

the July 2021 issue of Militant Leadership Monitor features a brief on the Herat warlord Ismael Khan, who has returned to the frontlines to fight the Taliban; an examination of infamous al-Qaeda ideological theoretician Abu Musab al-Suri’s role in promoting lone wolf attacks; a look at the recently arrested... END_OF_DOCUMENT_TOKEN_TO_BE_REPLACED