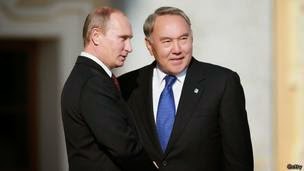 By Paul Goble
Two out of every three ethnic Russians now living in Kazakhstan say they would like to leave that country, according to a major study being conducted by a team of Kazan-based ethnographers, but few actually do so. According to official statistics, the number departing has been stable at approximately 20,000 a year. The first figure may appear apocalyptically disturbing, while the second may appear completely reassuring. But the scholars say that the situation is in fact far more complicated than that (Fergananews.com, March 13).
On one hand, the statement of preferences reflects how people feel about where they live as opposed to where they would like to be and suggests that the ethnic Russians in Kazkhstan are perhaps less well integrated into the country’s community than many in Astana or Moscow think. And on the other hand, the low number of actual departures is the product, among other things, of the actual prospects for jobs in the Russian Federation. At a time of economic difficulty, most people will remain where they are out of fear that moving could land them in an even worse position. Consequently, changes in Kazakhstan and Russia could easily lead to more unhappiness and more departures.
In 2012, at the request of the Kazan Institute of History, the Scientific Center for History and Ethnology at the Southern Kazakhstan State University interviewed 130 ethnic Russians in Chimkent—about one-tenth of one percent of the ethnic Russian population there. Since that time, the Kazan scholars have organized similar surveys the Kazakhstani capital of Astana, as well as in Petropavlovsk. None of the research has been published up until now, but discussions about it have become so widespread that Igor Savin, one of the researchers at the Chimkent center has decided to go public with some of the data. What he presents provides a fascinating glimpse into one of the most important issues in Eurasia (Fergananews.com, March 13).
Savin says that of those who say they want to leave, 52 percent point to Kazakhstan’s language and ethnic policies as their reason to emigrate. An additional 24 percent say that they would like to escape what they see as a worsening of inter-ethnic relations. The community is isolated: Only two percent of its members speak Kazakh fluently; 51 percent have some familiarity with the language of the country; but 33 percent say they do not know a word of it. As a result, he continues, more than four out of five—82 percent—feel “discomfort” in interacting with others in Chimkent.
As far as inter-ethnic relations are concerned, 71 percent of the ethnic Russians surveyed say they often or sometimes experience discrimination because of their nationality. That happens, they say, most often in government offices, somewhat less in day-to-day living, and relatively infrequently at work or in schools. Thirty-nine percent of ethnic Russians consider Kazakhstan their native country; but 13 percent say their native country is the Russian Federation; 11 percent name the former Soviet Union; and two percent point to the Commonwealth of Independent States (CIS).
The survey also sought to determine ethnic-Russian attitudes toward marriage with members of other nationalities and toward other more personal activities. Almost a third of the Russians surveyed were married to someone of a different nationality; and 40 percent say they would be indifferent or approve of the marriage of one of their daughters to an ethnic Kazakh. Only 16 percent say they would be “categorically” against such unions. On a relative issue, 88 percent of the ethnic Russians say they are quite ready to live next door to a Kazakh: only 2 percent say they would not want to.

These patterns suggest that ethnic Russians are far from integrated in Kazakhstan and that, in the event of a crisis or of intense Moscow propaganda, the situation could deteriorate quickly in a Donbas-type scenario. But if the situation continues without either of those factors, the ethnic Russians of Kazakhstan are likely to decline in numbers still further and not present Astana with a serious problem.

The January 2016 issue of Militant Leadership Monitor begins with briefs about Turkmen Iraqi leader, Arshad al-Salehi, and a Libyan military commander by the name of Salam Jadallah al-Ubaidi. The first profile in the issue describes the significance of Abu Wardah Santoso in the uptick of Islamic State violence... END_OF_DOCUMENT_TOKEN_TO_BE_REPLACED