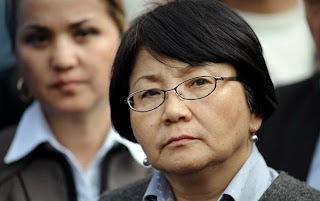 By all measures, the story of Kyrgyzstan’s current leader Roza Otunbayeva’s is an exceptional one. She is the first female leader in power in Central Asia and the only leader who boasts wide international experience prior to assuming power. Otunbayeva rose to the top when other political leaders lost their support because of their inability to challenge former Kyrgyzstan President Kurmanbek Bakiyev, succumbing to dirty tricks to achieve their personal gains. She was consistent, sharp, and fair—at times in stark contrast to most other politicians. Her main supporters are urban and educated Kyrgyz of a different age. She is also widely respected internationally.

Kyrgyzstan is known for its female activists. Compared to neighboring states, more women are engaged in NGO work and international aid agencies. Anecdotal evidence suggests that more women were forced to depend on their own careers in Kyrgyzstan, where the industrial complex is underdeveloped and no significant sources of carbon resources are available. Mixed with generally lax religious traditions and high education rates, women were able to find opportunities in business and politics.

Some anecdotal evidence suggests that in neighboring Kazakhstan, the structure economy does not permit a woman’s rise to the top. Dominated by male entrepreneurs in the oil and gas industry, women are encouraged to occupy more “feminine” positions in society. This is not to say that Kazakhstan does not have prominent female leaders in the private and public sectors; President Nursultan Nazarbayev’s daughter, Dariga, is notorious for her skill to manage her media conglomerate and play a leading role in politics. Few other female leaders head important government institutions as well, but none of them have clear prospects to compete for the president’s or prime minister’s seat.

In Uzbekistan, Gulnara Karimova is often mooted to succeed her father, President Islam Karimov, though not everyone in Uzbekistan is convinced that she would be able to hold on to power over competing male leaders. “If she ever inherits power, it won’t take long before she sees a ‘checkered sky,’”, commented one Samarkand resident, hinting that Karimova might be put in jail by her competitors. No female leaders have a real chance of succeeding in Tajikistan or Turkmenistan.

Otunbayeva will go down in history as the first female leader in Central Asia. What is less clear is if she will be able to retain power beyond the upcoming presidential elections in October 2011. She is surrounded by male politicians with endless ambition, some of them infamous for their extramarital affairs. Even her strongest supporters in Bishkek think that to succeed, Otunbayeva will either have to build a more feminine image of a “mother of the nation”, or play rough by the rules of her male competitors.

The Jamestown Foundation is pleased to host a forthcoming webinar... END_OF_DOCUMENT_TOKEN_TO_BE_REPLACED